Satire has long been used to expose human rights abuses—take Jonathan Swift’s “A Modest Proposal,” or this letter to a newspaper written over a hundred years later.

“Are Women Animals?” asked its writer, whose letter was published this month in 1872 in The Times of London. The writer, still known only as “An Earnest Englishwoman,” asked if women—who did not have remotely equal legal status with men under English law at that time—were even due the level of legal protection against cruelty afforded to animals.

By doing so, writes author Joanna Bourke in What it Means to be Human: Reflections from 1791 to the Present, the Earnest Englishwoman was “protesting against the fact that women were not being treated as fully human.” She wasn’t asking if women were biologically animals—the answer to that question was clear—but was using the example to highlight the cruelty towards women that she felt went often unpunished in a legal system designed to protect men’s property rights.  Bourke writes:

Who, she asked, are entitled to the social and political rights assigned to ‘mankind’? How could it be just that animals had been granted more rights under law than women? She sounded exasperated. ‘Whether women are the equals of men has been endlessly debated’, she admitted, adding that it was a ‘moot point’ whether women even possessed souls. But, she pleaded, ‘can it be too much to ask [for] a definitive acknowledgment that they are at least animals?’

Women’s status under the law would improve if they were considered animals, Bourke writes—because they would be subject to the explicit prohibitions against animal cruelty that had been put into force earlier in the century, thanks to the Royal Society for the Prevention of Cruelty to Animals.

The RSPCA was founded in 1824, almost 50 years before the Earnest Englishwoman’s letter. RSPCA members pushed for more animal welfare laws and sought to enforce existing laws. In doing so, that meant animals had an active advocate looking out for their welfare—something women did not have. The Earnest Englishwoman's letter, writes Bourke in a separate article, was prompted by real events:

Her fury had been fuelled by recent court cases in which a man who had “coolly knocked out” the eye of his mistress and another man who had killed his wife were imprisoned for just a few months each. In contrast, a man who had stolen a watch was punished severely, sentenced to not only seven years’ penal servitude, but also 40 lashes of the “cat.” She noted that although some people might believe that a watch was an “object of greater value than the eye of a mistress or the life of a wife,” she was asking readers to remember that “the inanimate watch does not suffer.” It must cause acute agony for any “living creature, endowed with nerves and muscles, to be blinded or crushed to death.”

Indeed, she wrote, she had “read of heavier sentences being inflicted for cruelty towards that—may I venture to say?—lower creation,” meaning animals.

The letter, Bourke writes, added to the ongoing conversation about the rights of sentient beings that helped to shape Victorian England and America. Indeed, a year later in America, the first successful court case against child cruelty was brought—by the American Society for the Prevention of Cruelty to Animals. 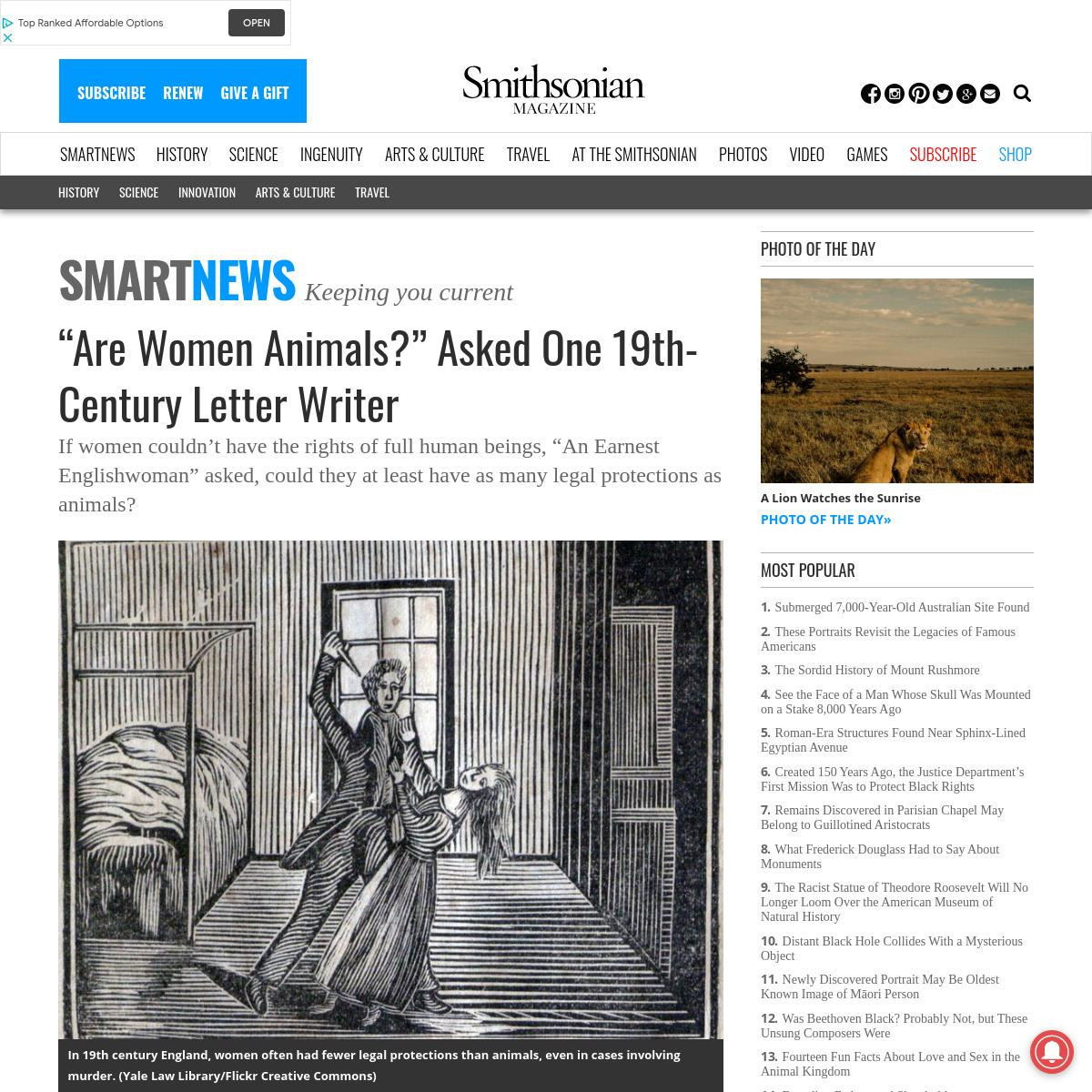