Mannequin of "male figure of the laboring class" or "farmer". Labeled on bottom of foot "Tokio Ningiocho" and "Nedzumiya Denkichi". Clothing for this mannequin is cataloged under #s 92429A, B, C, D, E, F, G, and H. The 1880 Guidebook to the Smithsonian exhibits - Rhees, William Jones, 1830-1907. Visitor's Guide to the Smithsonian Institution And National Museum, Washington, D.C. [Washington]: Judd & Detweiler, Printers and Publishers, 1880 - describes Japanese mannequins on p. 75 - 76 https://babel.hathitrust.org/cgi/pt?id=njp.32101025795889&view=1up&seq=85 “WALL AND ALCOVE OR UPRIGHT CASES . CASE 1 . - Dressed lay figures of Japanese man and woman of the agricultural class. Made in Japan for the Institution . Note: Exhibit mounts (from loan to Contemporary Art Museum, Kumamoto) stored with object.

From Anthropology Conservation Lab Condition Report, 2004, see ACL files for additional information: Materials: Wood, gesso, paint, papier mache, hair, glass, keratin. The mannequin is an anatomically correct and to scale replica of a standing Japanese man created to represent a farmer. The mannequin was executed in wood and papier mach and then covered with a gesso and then a paint layer. The hands, feet, face and genitals are all wood. The rest of the body is made of papier mache. The carving is detailed to simulate musculature, veins, skin folds and genitals. The surface is painted to highlight grooves, texture and changes in the surface. Through X-radiography it was determined that there are wooden support structures located in some of the papier mache areas. The head is attached to the rest of the body by a wooden plug. Each arm has two wooden plugs that are composed of two pieces of wood nailed together. The first is located in the arm pit region and the second is located just above the elbow. The wooden proper right hand is nailed to a piece of wood in the wrist area. The proper left hand shows no signs of nails in this area, so it is assumed that it has been glued to a block of wood. It is unclear from the X-rays if there is a central wooden support running from the neck to the pelvis area, however there is one in the female mannequin (E92430). The pelvis armature is composed of two pieces of wood nailed together. The genitals are then attached to this pelvis support. There is a wooden armature in each of the legs that is attached to the pelvis armature and also to each wooden foot with nails. The proper right arm is bent at the elbow so that the forearm extends forward. The hand is bent in a grasping gesture with all digits pointing down, and with the fingers facing towards the front and the thumb facing towards the rear. The proper left arm hangs to the side with the palm facing in towards the body. The head faces forward. The mannequin's black hair is pulled back and tied with fibers. The mannequin is bald on the very top of his head. It appears that the hairs were first attached or anchored into some kind of fabric (?), which was then adhered to the mannequin's head. Sequential linear grooves were cut into the wooden surface of both the pubic and eyebrow regions. The hair was then implanted into these grooves. It is uncertain as to how the underarm hair was attached. The finger and toe nails appear to be made of some kind of keratinous material that is shaped into a thin sheet. It seems as though grooves were cut into the cuticle area of the finger and then the keratinous sheets were slid into these grooves. It is uncertain as to how the nails were then adhered in place. On the bottoms of the feet are two manufacturer's labels. On the proper right foot "Tokei Ningiocho, Ned Zumiya Den Kich" is written in black ink on a white layer. The label on the proper left foot, saying the same thing, is written in Japanese characters. On the heel of each bood is a 2 x 2.2 cm square hole that permits a square mounting peg. The square mounting peg still remains in the proper left foot. In 2004, a sample of wood was removed from the attachment hole in the proper right foot for analysis by Harry Alden of the Smithsonian Museum Conservation Institute. The wood was identified as Fir (Abies sp.). In 2004, an eyelash was removed for identification by Harry Alden of the Smithsonian Museum Conservation Institute. It was identified as human hair.

This accession is recorded under the year 1878, and that appears to be when the noble male and female mannequins # 92426 and 92427 were commissioned and received. Note that the mannequins of the male peasant rice farmer and wife #s 92429 and 92430 appear to have been commissioned earlier, and included in this accession. The Anthropology catalogue ledger book entry for the farmer and wife lists a collection date of 1875. P. 76 of the Smithsonian Annual Report for 1875 records a donation of "Lay figures of Japanese farmer and his wife" as received from Horace Capron. P. 53 of the U.S. National Museum Annual Report for the year 1893 also talks about mannequins 92429 and 92430 as having been received in 1875, and illustrates them in Plate 42 (both mannequins) and Plate 43 (92429 only), after p. 52. See also p. 75 in Rhees, William Jones. 1880. Visitor's guide to the Smithsonian Institution and National Museum, Washington, D.C., Part 3 [Washington]: Judd & Detweiler, Printers and Publishers. The farmer and his wife mannequins are described as being on display in Case 1. A photo of Smithsonian exhibits in 1880, which includes an exhibit case with the farmer and his wife mannequins, is in the collections of the Smithsonian Institution Archives: Photo ID: SIA Acc. 11-006 [MAH-4492], SIA Acc. 11-006, Box 014 - United States National Museum. Division of Graphic Arts, Photographic Collection, 1860-1960, Smithsonian Institution Archives, https://siarchives.si.edu/collections/siris_arc_391403 . 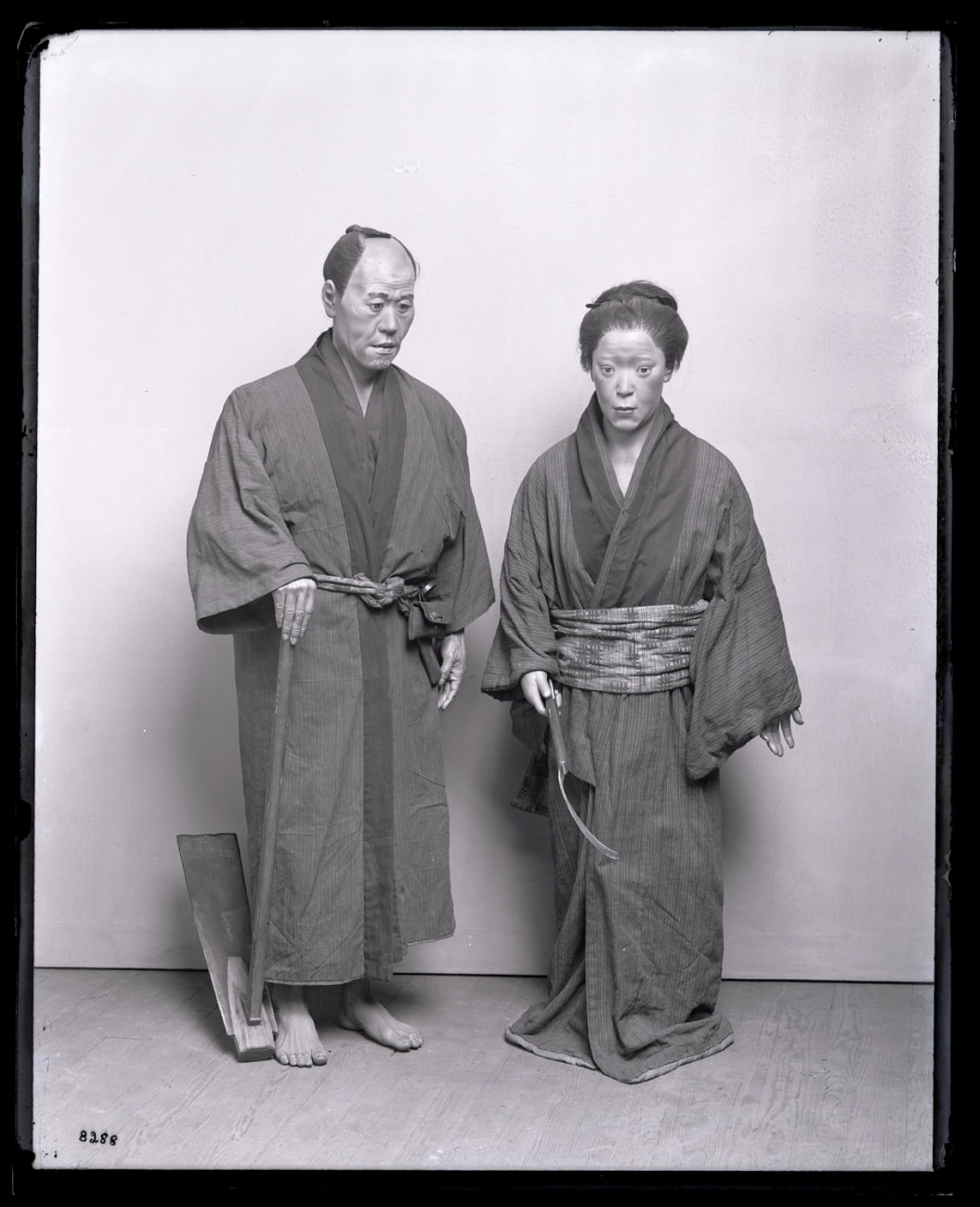 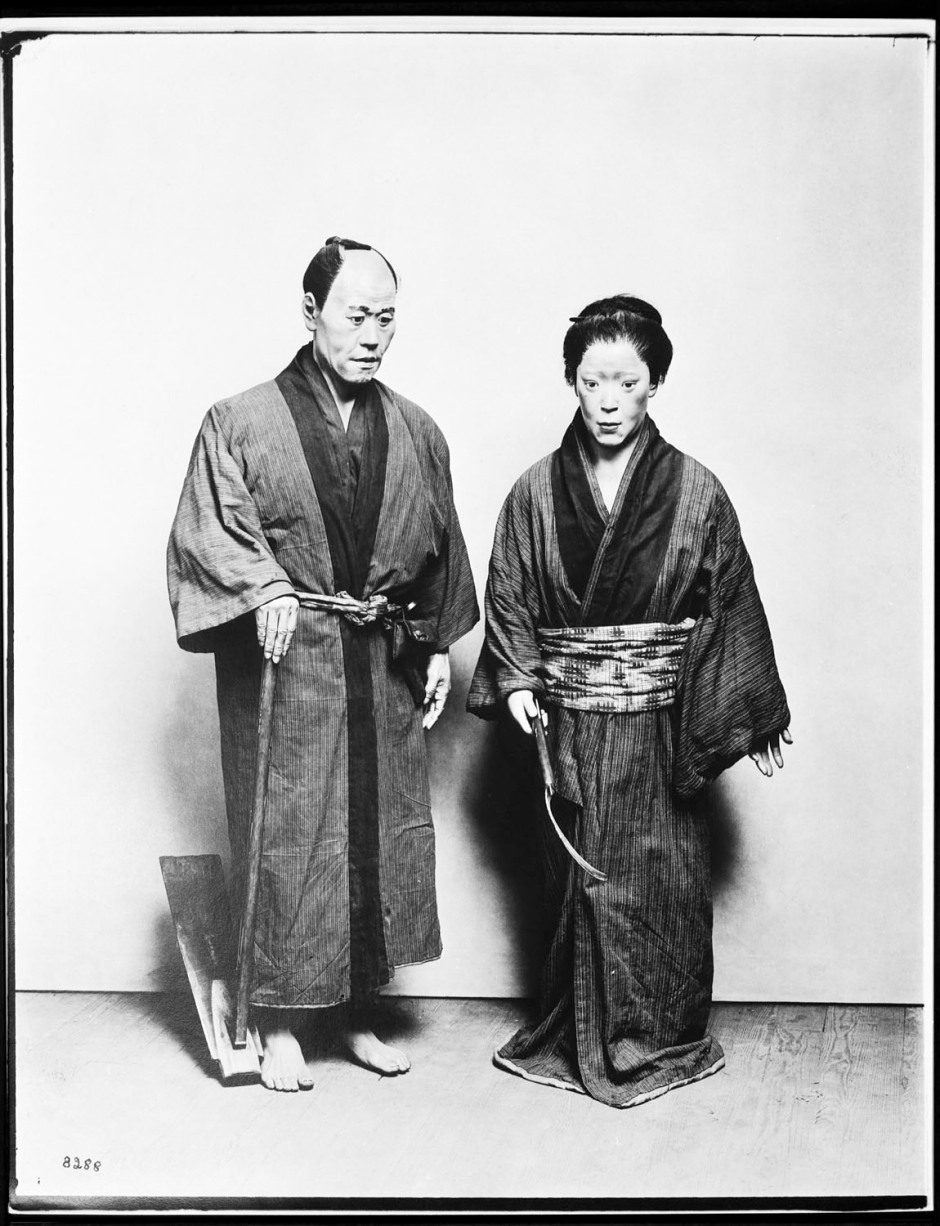 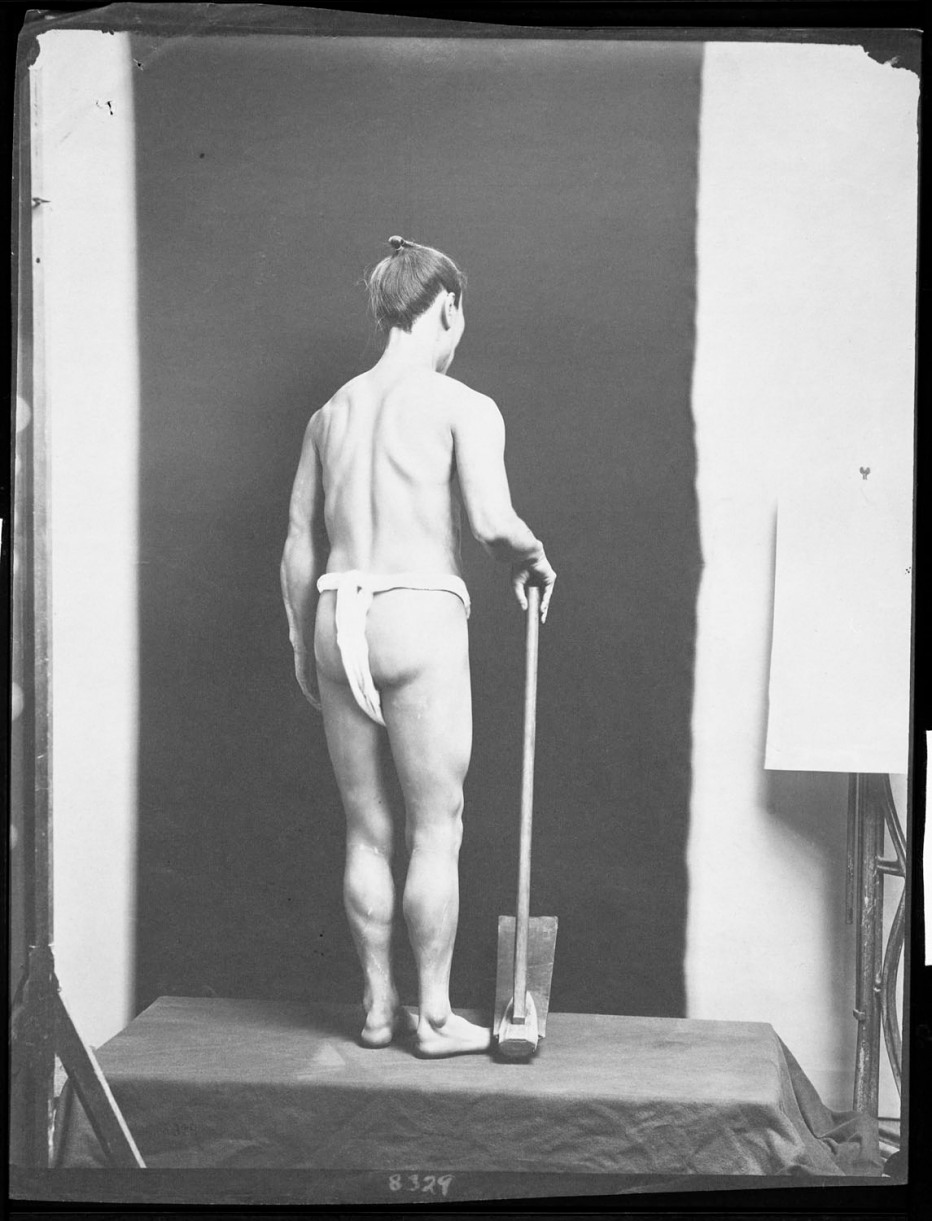 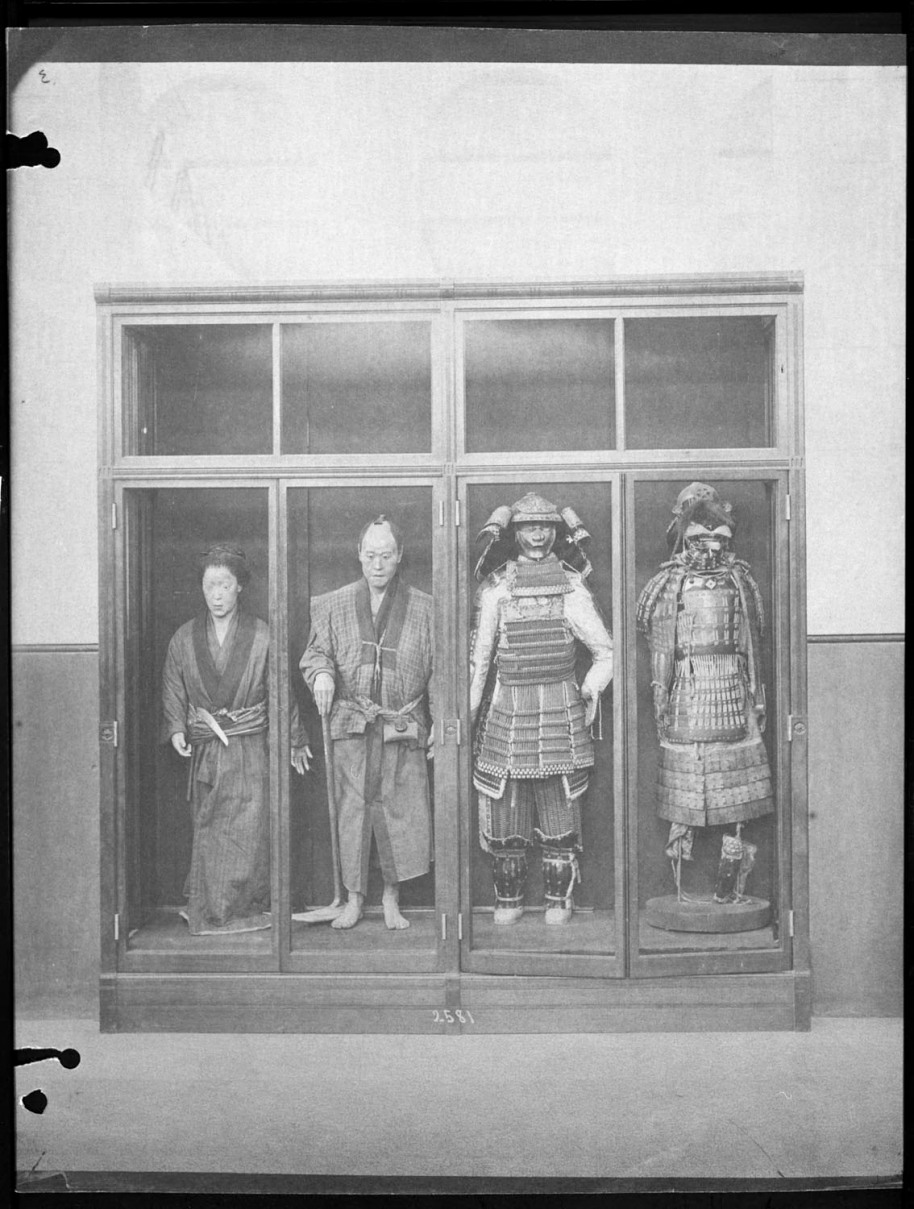 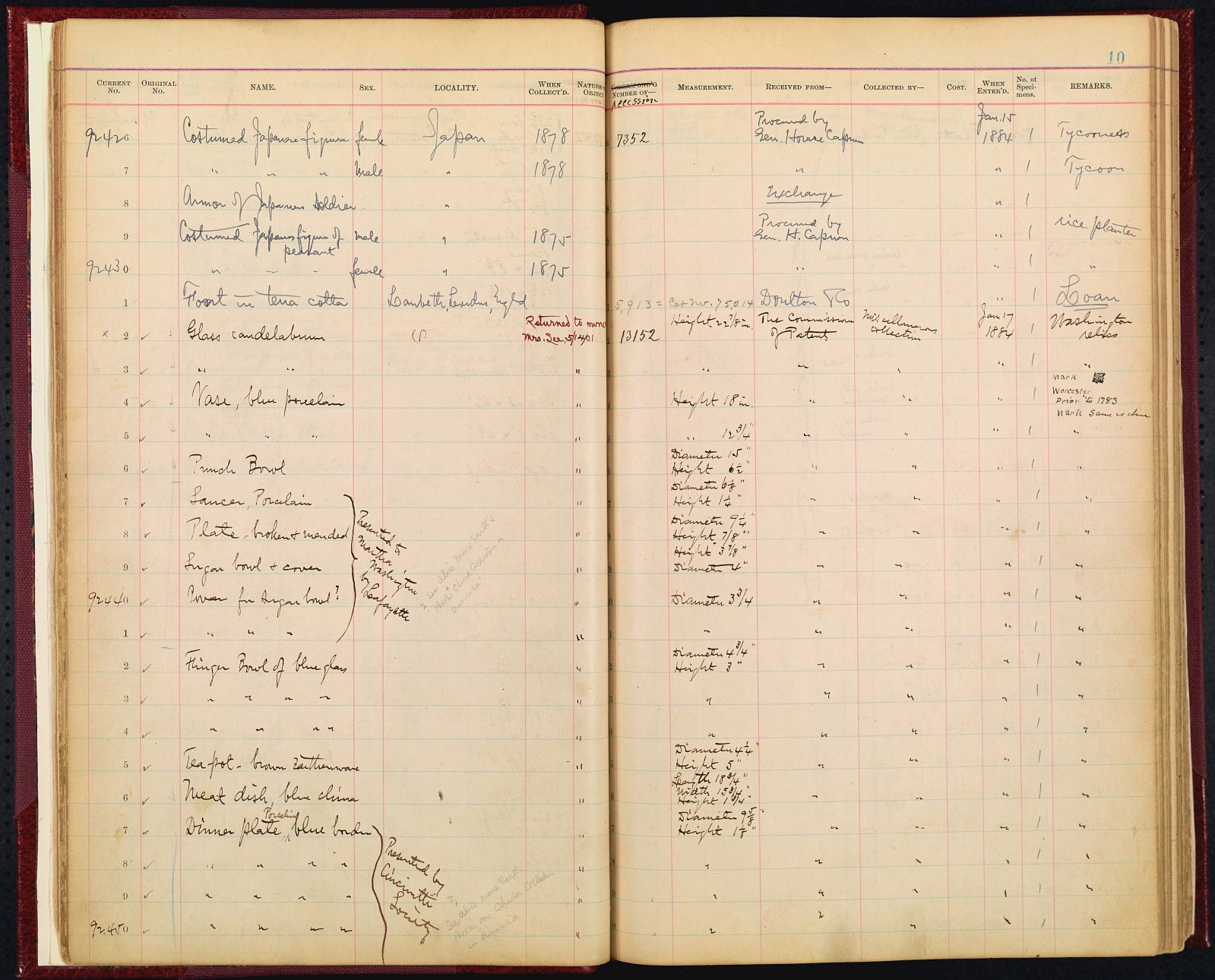