After Alabama became a state in 1819 and after the Indian Removal Act of 1830, white settlers and their African slaves arrived in the area in great numbers. This map was created under the auspices of the General Land Office, a federal agency that was formed in 1812. The agency took over functions begun under the Federal Land Ordinance of 1785.

This map shows Alabama divided into square townships 6 miles on each side (townships at the edges of the state tend to be smaller and irregular in shape). Some townships are designated A, B, C, D, or X. The scale seems to be 18 miles to the inch. The identified towns are Cahaba, Florence, Huntsville, Mardisville, Mobile, Montgomery, Sparta, St. Stephens, Tuscaloosa, and Wetumka. The Cherokee Cession is shown, as are the Choctaw Cession of 1830, the Chickasaw Cession of 1833, and the Creek Cession of 1832. One meridian runs through St. Stephens, a settlement along the Tombigbee River (here spelled Tombeckee) that served as the original capital of the Alabama Territory. Another meridian runs through Huntsville, the first incorporated town in the region. An east-west line at 31° north latitude divides Alabama from West Florida. Another east-west line divides the Northern and Southern surveyor’s districts. 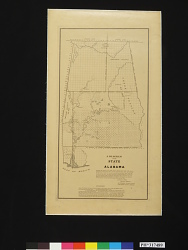