Change Author / Owner : How Researchers Are Beginning to Gently Probe the Science Behind ASMR

The burgeoning Internet phenomenon was so new, it didn’t even have a name. It was so strange and hard to describe that many people felt creepy trying. It resided at the outer edge of respectability: a growing collection of YouTube videos featuring people doing quiet, methodical activities like whispering, turning magazine pages and tapping their fingers. Some viewers reported that these videos could elicit the most pleasurable sensations: a tingling feeling at the scalp and spine, coupled with euphoria and an almost trance-like relaxation.

Seven years later, ASMR is having a pop culture moment—even if many of those who use it don’t know what the acronym stands for. The phenomenon’s most popular practitioners have more than half a million subscribers, and the doyenne of ASMRrtists, Maria of Gentle Whispering ASMR, has been so successful that she’s been able to quit her job to role-play soothing cosmetologists, librarians and flight attendants full-time. But what is ASMR? What function does it serve, who is drawn to it, and why? Or, as researcher Craig Richard puts it: “Why are millions of people watching someone fold a napkin?”

As ASMR has started to come to mainstream attention, researchers have finally begun trying to answer that question. Neuroscientists are now experimenting with fMRIs and electroencephalography to see if the brains of “tingleheads,” as they are called, are any different than those who don’t tremble at the sight of napkin-folding. They’ve also surveyed tens of thousands of people who say they experience the phenomenon. So far there are intriguing—if limited—findings suggesting that ASMR may relieve some people’s symptoms of stress and insomnia, and that the brains of those who experience it may be organized a little differently.

For those who have long followed the neurological phenomenon, however, there are more expansive questions to explore. They want to know: Can probing the ASMR experience help us better understand how the senses, pain, relaxation—and even love—manifest in the brain?

ASMR stands for Autonomous Sensory Meridian Response, a nonclinical term coined in 2010 by Jennifer Allen, who’s been involved in online organizing around ASMR since the late aughts. Allen, who works in cybersecurity, figured people couldn’t discuss the phenomenon unless it had a name—ideally, an official-sounding one, to lend legitimacy to a practice that can be embarrassing to share. Once ASMR had a name—and had been featured in a slew of can-you-believe-this news stories—academics became interested in pinning down what it was.

In 2015, two psychology researchers at Swansea University in Wales published the first peer-reviewed research study on the phenomenon, in which they tried to do the bedrock work of describing and classifying ASMR. After surveying 475 people who report experiencing “the tingles,” they found that a sizable majority sought out ASMR videos on YouTube to help them sleep, and to deal with stress. Most viewers found they felt better after watching these videos and for some time after, including those who scored high on a survey for depression. Some of the subjects who suffered from chronic pain also said the videos decreased their symptoms.

Maria of Gentle Whispering ASMR's hairbrush (not shown) has become an icon of the Internet craze. (photonic 2 / Alamy)

A smaller, more recent study offers a hint as to where ASMR research might go. Last year, psychology professor Stephen Smith and two colleagues at the University of Winnipeg put 22 subjects into fMRI scanners. Half were people who reported experiencing ASMR, and half were controls. Because the researchers did not know if they could reliably trigger tingles inside noisy fMRI machines—they tried this approach, and subjects seemed to have trouble relaxing—they scanned the resting states of 22 brains as the subjects simply lay there, to see if there were any differences between the two.

What caught their attention was the brain’s “default mode network,” which Smith describes as “a lot of structures along the midline of the brain,” as well as parts of the parietal lobes above the backs of the ears. “The activity of these areas tend to fluctuate together, so we assume that they work together as a network,” Smith says. The default mode network is “most apparent” when a subject is awake and at rest, and is often associated with internal thoughts and mind wandering. In a scanner, the default mode network typically shows up as certain areas of the brain “lighting up” at the same time. But the brains of subjects who experienced ASMR looked different.

The areas that typically work together weren’t firing together as much. Instead, other areas of the brain were getting more involved than usual—areas related to a visual network, for instance. These differences suggest “that instead of having distinct brain networks the way you or I would, there was more of a blending of these networks,” says Smith, who studies the neuroscience of emotion. “It does make intuitive sense that a condition associated with atypical sensory association and atypical emotional association would have different wiring in the brain.”

Smith speculates that ASMR may be similar to synesthesia, the fascinating neurological condition in which people see numbers in color and “taste” shapes. “In synesthesia,” he says, “there have been some studies that show there’s slightly atypical wiring in the brain that leads to slightly different sensory associations, and I think that may be the same thing we have here.”

However, Tony Ro, a professor of psychology and neuroscience at the City University of New York Graduate Center, said in an email that the University of Winnipeg study “is unfortunately not as revealing or informative as it could have been,” given its small size and the fact that researchers were measuring subjects at rest, rather than while experiencing ASMR. The resting state differences could be due to other factors, like higher rates of anxiety or depression, he says. Still, writes Ro, who researches synesthesia and has also been intrigued by ASMR for a few years, “I do think that ASMR may be a form of synesthesia.”

In another study, detailed in a forthcoming paper, Smith and colleagues tested 290 people who experience ASMR for what are known as the Big Five personality traits, and compared their results to those of an equal number of “matched controls.” Smith and colleagues found that ASMRheads scored higher on measures for what’s known as “openness to experience” and neuroticism and lower for conscientiousness, extraversion and agreeableness—findings the researchers say warrant more study.

Over at Shenandoah University in Winchester, Va., Craig Richard, a professor of biopharmaceutical sciences, runs the clearinghouse website ASMR University, where he interviews people who’ve studied the phenomenon and blogs about ASMR in the news. Richard himself reports experiencing ASMR; nevertheless, he says scientific skepticism is warranted until more studies are published. To that end, Richard and two other researchers, Allen and a graduate student, have been conducting an online survey that he says so far includes 20,000 people across over 100 countries, almost all of them “tingleheads.”

The study is still ongoing, and results have not yet been published. But for his part, Richard has been developing a theory of what ASMR is and why it exists. His theory isn't exactly scientific, but it is beautiful: He notes that the quality that underlies almost all ASMR videos is what’s been called a “tranquil, womb-like intimacy.” That is, ASMRtists speak softly into the ears of headphone-wearing viewers, gently coaxing them to sleep by way of assiduous personal attention, comforting words, smiles and simulated stroking. At its most essential level, Richard believes, all the intimacy channeled through towel foldings and whispered affection is about triggering the felt experience of being loved.

Richard and his team ask participants to rank the way they’d most prefer to experience ASMR, if YouTube weren’t the only option. (Data from the Swansea University study shows most people have their first ASMR experiences as children, through real-life interactions with family and friends.) “Receiving light touches with my eyes closed” ranked first; sound triggers were below and visual ones lower still—an echo, Richards says, of how the senses develop in human beings.

“When a newborn is born, the sensation that is the most developed and they receive the most information through is touch, and the one that’s least developed is sight,” he says. Parents show infants love most of all through touch, he argues—coddling, stroking—and all of this helps explain why ASMR is, at its best, an in-person experience with echoes of childhood experiences.

“The reason people can get tingles and feel relaxed and comforted listening to Maria GentleWhispering is because she’s acting very much the way a parent would care for you,” he says, “with the caring glances, gentle speech and soothing hand movements. And a lot of the time she’s doing simulated touching. It’s pattern recognition. Our brains recognize the pattern of someone with a caring glance, someone with a gentle whisper, and we find that comforting.”

Richard suggests that the “extreme relaxation” of ASMR may be the mirror image of panic attacks, residing at the far end of the relaxation spectrum. If, as his data so far shows, three-quarters of his subjects use ASMR videos to help them sleep, a third say the videos help them “feel less sad,” and smaller percentages use the videos to deal with diagnosed anxiety disorders and depression, ASMR could one day have therapeutic applications, he argues.

It’s a provocative idea: that the medical community might one day be able to “elicit some of those biochemical experiences associated with love—through a video with a stranger,” as Richard puts it, and use it to treat the ails of modern life like insomnia, stress, depression. Can you, in essence, bottle love—and should you?

But so far, that’s still speculation, and far outside the realm of what scientific research can tell us. “I do think we should remain skeptical about ASMR until we are able to measure its automaticity, consistency, reliability, and underlying neural mechanisms much more carefully,” says Ro, the synesthesia researcher.

Even if the Internet has led researchers to the discovery of a previously unknown sensory phenomenon, there are still plenty of challenges ahead. There are many unanswered questions, like why only certain people experience ASMR, what percentage of the population they make up, and whether those who never have can be triggered to experience it. More immediately, there’s the ever-present challenge of getting funding to better understand an experience that still raises skepticism. Smith says that the term ASMR still “comes across as a little bit new-agey in the scientific world.”

Plus, it’s logistically difficult to study a phenomenon that requires quiet and prefers solitude. As Smith points out, fMRI machines are noisy and EEG tests (which Smith’s team also tried) involve attaching “goop and sensors” to the scalp, potentially interfering with the ability to feel tingles. As Smith puts it, “the tools we have are not relaxing.”

Yet despite its challenges, further research into ASMR comes with the tantalizing potential of helping us better understand of the brain. For psychologists, it could also help enhance treatment plans for anxiety and depression, at least for some people. More poetically, it might help us understand how people feel loved. “But mainly,” says Smith, “it’s just cool.” 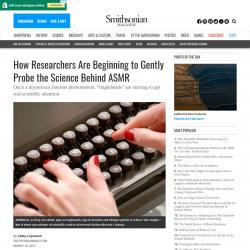