Change Author / Owner : A New Generation of Interplanetary Rovers Is Crawling Toward the Stars

The surface of Europa, one of Jupiter’s four moons, makes a formidable foe. First off, it's wrapped in a thick rind of ice, torn open into great chasms by Jupiter’s massive gravitational pull. Then there’s the extremely low surface gravity and sheer, slippery ice canyons. But beneath all that ice, Europa is also thought to have an ocean of liquid that might support life—making it a prime target for our next in-depth solar system exploration.

So how will NASA overcome this treacherous challenge? It certainly can’t send a wheeled rover like Sojourner, which made one giant leap for robotkind when it first traversed Mars’ Ares Valles in 1996. Instead, NASA is looking to do away with those once-revolutionary wheels and reimagine how the next generation of robots will explore asteroids and the frigid outer worlds of the Solar System in the next few decades.

Currently weighing in at around 75 pounds, this next-gen rover is a fraction of the size of Mars’ Curiosity, which checks in at nearly a ton. Its size alone stretches the boundaries of robotic ability—but if it’s ever deployed, it will need to do more than that. The pint-sized rover will have to withstand wildly extreme temperatures and magnetic conditions; navigate any surface; and do it long enough to gather meaningful data with some of the lightest, smartest space science instruments ever built.

Is it up to the task?

Admittedly, the robotic LEMUR—an acronym for “limbed excursion mechanical utility robot”—isn’t as cute as the wide-eyed, fluffy tailed species popularized by Dreamworks’ Madagascar. Rather, the robot gets its name from the real mammal’s ambidexterity. Initially intended to be a repair robot for manned moon missions, the rover has been redesigned for microgravity exploration of the vertical and inverted surfaces of canyons and caves.

“[Lemurs] use both their hands and feet for mobility and manipulation,” explains Aaron Parness, extreme environment robotics group leader at NASA’s Jet Propulsion Laboratory (JPL). “Even though our robot doesn’t have distinct arms and legs, it’s similar to a monkey or lemur in that it can use its feet for doing things much more efficiently than humans can.”

To ensure that the robot can move around in even stranger environments than those found on Mars, Parness's group has created what might be called a “chimerobot”: a robot that draws upon the abilities of many different terrestrial animals. With its reaching limbs and paddle-like feet, LEMUR evokes a spider or starfish, using its appendages to creep and cling to sheer surfaces.

The robot’s four limbs are fitted with interchangeable circular “feet,” which can be swapped out for attachments with different functions, Swiss Army knife-style, to help it traverse a variety of surfaces. Rock-climbing feet feature a series of tiny, razor-sharp steel hooks, known as microspines, to grip the rough surfaces of rocks firmly enough for one foot to hold the entire robot’s weight. For smooth surfaces, such as the outer hulls of space stations or satellites, LEMUR adheres itself with gecko-like sticky feet.

Recently, researchers took one of LEMUR’s “hands” to Antarctica to test out a new and potentially crucial attachment: screw-like ice drills. When Parness and his team are ready to test their hardware, they “look for the toughest places we can find,” Parness said. “We have to strike the right balance between having the right environment, but also not being so remote that it’s crazy expensive and impossible to get the team there. Antarctica was on the very edge of that.”

To do so, they called upon Aaron Curtis, a geographer-turned-volcanologist-turned-roboticist who has spent several summers on the far southern continent, crawling around icy tunnels formed by Mount Erebus, Earth’s southernmost active volcano. With average summertime temperatures dipping to -22 degrees Fahrenheit, the volcano, the ice formations it creates, and its standing lava lake represent a fair proxy of conditions a legged rover might encounter on icy moons like Europa or Enceladus.

Aaron Curtis traveled to Antarctica this past December, where he tested robots and instruments designed for icy worlds like Europa. (Nial Peters)

As a research associate with Mount Erebus Volcano Observatory for six of the last seven years, Curtis charted the topography of the ice surrounding the volcano. His particular interests were beneath the surface, in the caves and tunnels melted into the ice by gases escaping the volcano’s fissures. Finding places where the tunnels connected to the outside was sometimes as simple as finding a towering “ice chimney,” meters-high structures formed by escaping gas. Other times that meant finding cave entrances by dropping a snowmobile into an obscured hole in the ground by accident.

After spending four years mapping one cave in 3-D to observe its changes over time, Curtis found himself repeatedly running into the same challenges over and over. First, his team wasn't able to get to certain areas because they were too toxic for human exploration. Second, they feared that their human presence could be inadvertently contaminating the rare environment with introduced microbes. These two concerns led him to consider the utility of robotic explorers.

“If we had a robot that could get around on ice, we could explore microbially sensitive and gas-filled caves,” says Curtis. His own ice-bot tinkering ended up being a good fit for the work already underway on at JPL, which he joined as a roboticist last October.

Microspines, it turns out, tend to just shred ice instead of grip them, since the attachment is designed to squeeze the spines down onto the rock to gain purchase. So Curtis designed an attachment that used tiny drills to dig itself into an icy surface.

The original design became clogged with ice, Curtis says, so he turned to something human ice enthusiasts trust with their lives: off-the-shelf ice screws. They’re hollow, allowing ice to pass through instead of building up behind the drilling end, and would also allow LEMUR to produce and collect ice samples as it creeps slowly along.

The next ice-world tests will likely take place on the glaciers atop Mount Rainier in Washington—with the full LEMUR chassis and not just a disembodied foot attachment. But Parness said that the ability to test out sampling capabilities also underscores another key goal of the entire development process.

“With field testing, we’re always trying to hit two objectives: to demonstrate technologies for future use, but also to do meaningful science at that location,” he says. In other words, not only are LEMUR tests helping us to eventually understand cryovolcanoes on other bodies; “this benefits us on Earth as well," says Parness.

LEMUR gets a workout in Aaron Parness' lab at JPL during a recent test run. (NASA / JPL-Caltech)

For more than 35 years, Penelope Boston has sought out microbial life and its indicators in extreme environments, such as in the sulfuric acid-soaked Cueva de Villa Luz in Tabasco, in Mexico. In her former role as director of cave and karst studies at New Mexico Institute of Mining and Technology, where she studied aging and erosion processes of subterranean caves and sinkholes, Boston directed Parness toward locations where his team and LEMUR could learn what to look for, and how to look for it.

“I’ve helped Aaron’s team understand what the subtle cues might be that could indicate possible microbial or mineral deposits of interest for LEMUR to inspect,” said Boston, who now leads NASA’s Astrobiology Institute, over email.

The menu of possibilities, she added, are patterns left behind in or on rock formations by biological processes, such as textures that show microorganisms have been at work transforming bedrock or mineral deposits. On Earth, such evidence exists in places like Lechugilla Cave in New Mexico, where bacteria that feed on sulfur, iron and manganese are thought to have played a role in shaping the caves and spectacular stone formations there.

Clues left behind by microbial life are usually not so obvious. But by testing out a variety of instruments on both living and fossilized microbial remains, robots like LEMUR can shed more light on how these microbes lived, shaped their environments, and died.

Part of the challenge is making sure the tools are small enough to be mobile. So in addition to testing out the hardware, Parness and his team have been working with university partners to develop miniaturized remote sensing and analysis instruments. The idea is that LEMUR could wear them on its belly or like a backpack, mapping a cave or terrain in 3D with lidar, to gas chromatography, to looking for organics and carbon-rich molecules with a tiny near-infrared spectrometer.

“[Aaron] Parness’s group is exploring the possibilities of endowing LEMUR with pattern recognition and machine learning to help her see like a human being,” Boston said. “Paleobiology can often be very fine-scale and subtle, and enhanced visual and interpretation capabilities that robots can bring to the table are potentially immensely powerful tools to help us see and understand paleobiology better.”

Under the proposed federal budget from the White House, funding for the Asteroid Redirect Mission—the program where LEMUR is most likely to be used—would be eliminated. However, Parness and his team have been directed to continue their work on LEMUR. At the end of 2017, Parness will be heading back to the Titus Canyon area of Death Valley, where he's tested  LEMUR before, stopping by lava tubes in New Mexico in the summertime.

There, 500-million-year-old fossilized algae stand in as an analog for potential ancient remains elsewhere—but engineers must make sure LEMUR can see them. “If we’re trying to look for life on cliff walls of Mars or other planets, we should look for oldest traces of life on Earth and test our instruments there,” Parness says. “If we can’t detect life on our own planet, what gives us confidence that we’d be able to find it in an older, harsher sample?” 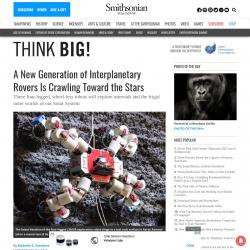