In 1861, having recognized that there was “no portion of the care of an army more important than the furnishing of the supplies,” the Howe Scale Co. introduced an “exceedingly compact” Army Scale that could be closed up “to prevent injury in camp or in transporting.” The firm would later claim that its “Army or Commissary Scales” could “be closed in half a minute, so as to form a complete and that more than 4,000 of these scales “were used by the United States army during the late war.”

The “Commissary Scale” for which Thaddeus Fairbanks obtained a U.S. patent in 1862 looked a lot like Howe’s Army Scale. It could be “reduced at will to a more compact form than that required when in use,” and locked for security. It could be used for “commissary and general army purposes,” and might “stand unwatched on wharves and other exposed places with little danger of the loss of any of its parts by theft.” E. and T. Fairbanks was soon manufacturing scales according to this design, and would continue doing so for many years. In 1897, the Fairbanks firm noted that their “Army and Navy Scales” had been found “very useful on board ship, where space is an object and compactness is desirable; also by contractors and army recruiting officers.” They also offered a similar “Recruiting Office Scale.”

The inscriptions on this example read “FAIRBANKS” and “RECRUITING OFFICE SCALE.” The colored image of a terrestrial globe crossed with the words “FAIRBANKS SCALES” represents the trade mark for which E. and T. Fairbanks received a trade mark on September 5, 1893. 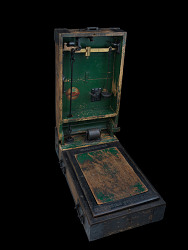