In 1880, Scientific American enthusiastically recommended Louis P. Juvet's time globe to its readers. It was, the magazine found, "a fit ornament for any library, a valuable adjunct in every business office, and a necessity in every institution of learning." The clockwork-driven globe was undeniably useful for studying geography, determining world time, and illustrating the rotation of the earth. The basis of its appeal, however, was even broader. Prominently displayed in the parlors and drawing rooms of Gilded Age America, the elegant time globe clearly demonstrated the wealth and culture of its owner.

Available in a range of sizes and versions simple and ornate, the time globe consisted of three basic elements: a globe, a mechanism for rotating it, and a base. The globe most often featured a terrestrial map, but celestial globes were also offered. An equatorial ring indicated worldwide time and zones of daylight and darkness. A meridian ring supported a clock dial over the north pole.

Concealed within the globe was a four-day, spring-driven brass movement that drove the clock dial and rotated the globe once every twenty-four hours. Manufactured for Juvet by Rood and Horton of Bristol, Connecticut, the movements featured a lever escapement and a balance wheel. Turning the feather end of the arrow-shaped axis wound the movement.

Precisely when production of the globes began is uncertain. Juvet, a Swiss immigrant and a resident of Glens Falls, New York, first patented a mechanical globe in January 1867, and exhibited one at the Philadelphia Centennial Exposition of 1876. Probably sometime in 1879, Juvet formed a partnership with James Arkell. By the early 1880s, Juvet and Company of Canajoharie, New York, was making more than sixty varieties of globes. In October 1886, fire consumed the factory where the globes were assembled, ending their manufacture there forever. 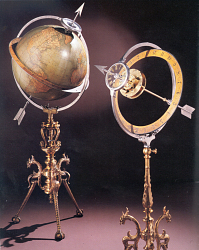