2016 was a momentous year for science. Check out how Smithsonian covered a few of this year's biggest science news stories.

The Arctic is undergoing another unusually warm winter, but it's only part of the story of global climate change. (Sebastian / Alamy)

It's been one year since nearly 200 countries agreed to control greenhouse gas emissions at a United Nations conference in Paris last year. The agreement couldn't come soon enough—this summer, scientists reported that carbon dioxide levels in Earth's atmosphere will now remain above 400 parts per million year round, a threshold that scientists have called "the point of no return." Carbon levels in the atmosphere are now threatening to skew carbon dating in the near future, though one scientist seems to have found a workaround. And when it comes to carbon dioxide levels, all hope is not lost: Some researchers are getting creative with their innovations, including researchers who figured out how to successfully capture carbon dioxide and turn it into stone.

An obituary for the Great Barrier Reef may be premature, but conservationists aren't breathing a sigh of relief yet. (Travelscape Images / Alamy)

Earth's rising temperatures have spelled trouble for coral reefs worldwide. Hotter waters disturb the coral organisms' food and pigment source, turning them a ghostly white and increasing their likelihood of dying. This year, Australia's Great Barrier Reef and Florida's elaborate reef system suffered massive bleaching events, and things are only set to get worse as temperatures keep rising. Though some have declared it too soon to sound the death knell on these prodigious ecosystems, we're not out of the woods yet: More frequent bleaching events keep coral from healing and preparing for future bleaching, putting them at risk of dying permanently.

This Byzantine wreck is one of over 40 ancient ships discovered in the Black Sea. (EEF / Black Sea MAP)

Besides dying coral, scientists also found a lot of shipwrecks underwater this year. From a "perfectly preserved" 19th-century cargo ship in Lake Superior to 40 ships at the bottom of the Black Sea that date back as far as the Byzantine era to 23 Greek shipwrecks as old as 525 B.C.E., it was a good year for finding nautical misfortune. The recent spate of shipwreck discoveries not only provides valuable archaeological finds, but has also allowed scientists to discover a possibly new termite species and piece together a history of hurricanes in the Atlantic Ocean before meterological records. Plus, now we know what 340-year-old cheese smells like.

Just over a century after Albert Einstein first proposed their existence, scientists this year announced that they had detected gravitational waves. Using ultra-sensitive equipment spread across the United States, physicists were able to pick up the energy released by two black holes colliding more than a billion years ago. A few months later, the team of scientists announced the detection of more gravitational waves from another pair of colliding black holes.

With these new tools, scientists hope to be able observe parts of the universe that cannot be seen with light, and perhaps even study the creation of the universe itself. "They have given mankind a completely new way of looking at the universe," Stephen Hawking told the team when they were awarded a Smithsonian magazine American Ingenuity Award earlier this month.

5. Space is the place

But gravitational waves weren't only things in space making waves this year. Two years after reaching the comet 67P/Churyumov–Gerasimenko, the European Space Agency's Rosetta probe met its violent end in a planned crash landing on the comet's surface. Don't be too sad, however. “Rosetta will live on because we’re going to get loads of great science out of the data that’s been taken,” mission scientist Matt Taylor told Gizmodo. “I think we’ve done all that we can with the spacecraft, and I haven’t got any regrets.”

In the U.S., the country mourned astronaut, politician, and all-around nice guy John Glenn. "He was a great American hero, there’s no doubt about it," Smithsonian curator Michael Neufeld told Smithsonian on the day Glenn died. That same day, Amazon founder Jeff Bezos received a Smithsonian magazine American Ingenuity Award for his pioneering work on reusable rocket technology. Bezos named his new generation of rockets "New Glenn," and he received a letter congratulating him from the original Glenn.

And don't forget about NASA. The granddaddy space agency successfully put its Juno spacecraft into orbit around Jupiter. Except to see some cool things from our solar system's biggest planet in the near future.

Precision gene-editing has changed the game for altering our genetic code, but controversy remains. (moodboard / Alamy)

With the help of new CRISPR technique for gene editing, Chinese scientists modified immune cells to attack cancer, marking the first time this method was used for treating a patient. U.S. scientists have meanwhile received permission to start testing gene editing of embryos to create "three-parent babies" that have potentially problematic genes replaced. Controversy remains, however, particularly when it comes to gene editing and food.

Dogs are not just our best friends, but possibly our oldest. (Tierfotoagentur / Alamy )

Dogs have been our trusted companions for far longer than previously thought, scientists discovered this year. It has been long thought that humans started domesticating dogs between 11,000 and 16,000 years ago, but genetic analysis of a 35,000-year-old wolf bone has shown that the process may have begun as long as 40,000 years ago. "One scenario is that wolves started following humans around and domesticated themselves," researcher Love Dalén told BBC News. "Another is that early humans simply caught wolf cubs and kept them as pets and this gradually led to these wild wolves being domesticated."

8. How Lucy fell from the sky (no diamonds, though)

For over four decades, Lucy has held the secret of her demise close to her chest—until now. (Juan Aunion / Alamy )

Lucy, the 3.2-million-year-old Australopithecus afarensis skeleton discovered in Ethiopia in 1974, is one of our most famous ancestors. The 3-foot-tall hominid represents a bridge between apes and humans—it's believed she lived primarily in the trees, but she was also able to walk upright on two legs. While her fossilized remains have been studied extensively for more than four decades, it was only this year that scientists were able to piece together how she died. Based on how her bones were damaged, Lucy appears to have taken a fatal plunge of more than 40 feet from her arboreal home to the earth below. Whether it was an accident or murder is hard to know, but researchers have managed to reconstruct her final moments as she reached out her arms to futilely save herself.

“We've all fallen, and we know at that instant in time what she was trying to do,” says anthropologist John Kappelman, who helped solve the mystery of the hominid's death. “We can actually fully identify with her at that moment, and I just felt a wave of empathy that I've never felt before with any of the other fossils that I've ever studied. My mind just jumped to seeing this little broken form, bleeding out, lying at the foot of a tree.”

Genetically-modified mosquitoes are among the new technologies for fighting Zika. (Dylan Becksholt / Alamy )

Easily taking the cake for the health scare of 2016 was the mosquito-borne Zika virus. The virus, which usually has mild symptoms, generated little notice when it started spreading through Brazil last year—until doctors started noticing a rash of birth defects, namely a condition called microcephaly in which children are born with undersized heads. Panic set in, and it didn't help that Brazil was set to host the Summer Olympics this year. From mosquito-resistant uniforms to condoms dipped in antiviral gel, teams got creative in their efforts to reassure their athletes.

As the Zika virus reached the U.S. later this year, officials in Florida began planning to fight its spread with genetically modified mosquitoes that will hopefully spread a fatal gene through the natural population. Meanwhile, ecologists took the opportunity to point out how deforestation is one of the main forces pushing new pandemics to spread from animals to humans. "This is a wake-up call," Ecohealth Alliance president Peter Daszak said. 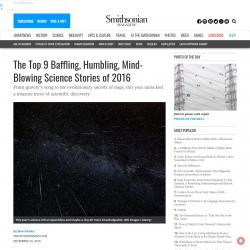 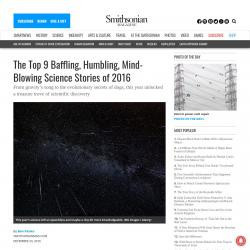