Change Author / Owner : Saving Face: How One Pioneering Surgeon Is Pushing the Limits of Facial Transplants

The 27-year-old volunteer fireman had climbed into a mobile home through a burning window, after hearing a man scream that his wife might be trapped inside. It turned out the man's wife wasn’t inside at all; she was fishing in a stream down the road. Hardison wasn’t so lucky. Once he made it inside, the ceiling collapsed. Hardison tore off his fireman’s mask, only to feel it melting in his hands. By the time he was pulled from the window and paramedics had pushed an IV into his arm, his fellow firefighters couldn’t recognize him. His face had melted and turned to char.

Hardison ended up losing every facial feature he had: eyelids, ears, lips, scalp, facial skin, hair, most of his nose. Even after more than 80 reconstructive surgeries, his face still resembled a fright mask. Doctors used flesh pulled from his thigh to cover over his skull, leaving his eyes narrowed to pinpricks by layers of scarred and fused skin. He wore sunglasses and a baseball cap to protect himself from the stares of people on the street. He was going blind. He spent the next 15 years in the shadows, fighting depression and addiction to pain killers, and ultimately losing his marriage and his tire business.

Then in August, 2015, a miracle happened: a possible face donor had been found.

Hardison’s surgeon at the time was Dr. Eduardo D. Rodriguez, a renowned plastic surgeon in Manhattan and the chief of the department of plastic surgery at New York University Langone Medical Center. Rodriguez, known in medical circles as a surgical Rodin, had a reputation for pushing the envelope for radical transplant surgery farther, harder and more meticulously than ever before. And he had just received permission to transplant the face of a 26-year-old brain-dead man who had gotten in a horrific bicycle accident in Brooklyn. After genetic testing, the man’s tissues and blood type proved compatible—a once-in-a-decade stroke of luck.

Now, Hardison was set to undergo the world’s most extensive face transplant to date.

When it came to saving faces, Rodriguez had already set the bar high for himself. In 2012, the surgeon successfully transplanted a whole new face onto a man named Richard Norris, who had lost his choirboy good looks—including his tongue, teeth, nose and jaw—after a shotgun accident 15 years earlier. But with Hardison, Rodriguez planned to go further: He would replace Hardison’s entire face, from neck to scalp, including his jaw, chin, nose, mouth, lips, ears and eyelids, as well as all underlying tissues. In doing so, Rodriguez and team hoped to restore Hardison’s ability to blink, saving his dwindling eyesight.

Rodriguez had high ambitions. He wasn't content with creating merely a passable alternative to no face at all. Nor did he want to create a face with obvious surgical deformities—i.e. skin color mismatch, drooping lips, a boxy, square facial appearance—as had been the outcomes of most partial to whole face transplants of the past. Instead, Rodriguez was aiming for a completely animated replacement: a natural looking face, one that could easily pass in a crowd.

But he also recognized the risks. He was well aware of how rare it was to find a compatible donor at this stage, and knew that his decision to replace every bit of damaged facial tissue would give Hardison a chance to return to some semblance of normality. At the same time, what if the transplant failed? How long would it last, especially given the body’s immune system and its natural propensity to reject foreign transplant tissue, even with a daily regimen of immunosuppressive drugs? What would the patient do if his or her face failed entirely?

“I’m obsessive compulsive about patient selection,” he says. “To me, the quality of the result is far more important than the quantity of the cases.” Most of the time, Rodriguez can perform reconstructions rather than transplants. But in the rare cases where nothing else will work, “I tell my patients, as I told Richard Norris and Patrick Hardison, that this procedure has a 50-50 chance of succeeding,” he says. (He bases that figure on “the complexity of this surgical procedure and the lack of information” about long-term outcomes.)

Rodriguez points out that an extensive facial transplant doesn't necessarily have a lower chance of succeeding than a less extensive one. But because so much tissue is being replaced, rejection by the patient's body could mean a critically dangerous amount of tissue loss.

The face transplant revolution is remarkably new, dating back to around 2005. Rodriguez, among other plastic surgeons, has built on little more than 38 known face transplant surgical experiences worldwide. These have had varying success; of those 38 patients, at least four have already died according to a recent study in the journal the British Medical Bulletin. Hospital reports indicate three causes of death: chronic immune system rejection, the failure or unwillingness of patients to take their daily immunosuppressive drugs, or secondary cancers, possibly associated with the drug regimen.

In 2005, a French woman named Isabelle Dinoire, who had been mauled by her Labrador retriever, became the world's first partial face transplant patient. Her surgeons, Dr. Bernard Devauchelle and Dr. Jean-Michel Dubernard, grafted a triangle of tissue—nose, mouth and chin—taken from a brain-dead female donor. Dinoire survived the procedure, but died in April 2016 at age 49. Her surgeons attributed her death to cancer after her immune system rejected her transplant last winter, causing a loss of sensation and control in her lips.

Like all transplant patients, Dinoire, a smoker, had been taking powerful immunosuppressive drugs since her operation. She had had numerous bouts of infection.  In a New York Times obituary, Dinoire’s hospital announced the return of Dinoire’s malignant tumor first operated on in 2015 could be “scientifically linked to immunosuppressive therapy,” noting that Dinoire’s death “perfectly illustrates the challenges of face transplants.”

In December 2008, U.S. surgeons ventured into the fray. The first American patient was Connie Culp, an Ohio woman whose husband—meaning to kill her—shot her point blank. Culp lost her right eye, nose, mouth and lower jaw in the shooting; afterwards, she could neither breathe normally, talk or eat.

Dr. Maria Siemionow, a pioneering hand surgeon at the Cleveland Clinic, ended up replacing 80 percent of Culp’s face. Culp’s new face appeared boxy and square, the result of a surgical decision to perfuse the transplant with parotid arteries and glands. However, she recovered much of her nerve sensation, as well as the ability to eat, smell, swallow and even laugh. Since her surgery, Culp has become a passionate advocate for organ donation and travels extensively for speaking engagements.

Since Culp’s surgery, Dr. Bohdan Pomahac, an associate professor at Harvard Medical School and director of plastic surgery and transplantation at Brigham & Women’s Hospital in Boston, has become another pioneer in this budding field. Pomahac focuses on “simple and feasible” procedures to replace the mid-face of severely injured patients; one of his achievements has been perfecting a facial artery technique to streamline the transplant operation. A conservative physician, he refuses to remove any surviving, living facial tissue from his patients, for fear of what would happen if the transplant fails. “I strongly believe in the concept of doing no harm,” Pomahac says.

“We focus on not hurting patients, meaning there is a compromise on [facial] aesthetics,” he adds. In the event of a failed face transplant, “I’m comfortable we can salvage a patient,” he adds, presumably through reconstruction surgery.

Pomahac's team has performed seven face transplants to date. One of them, a 25-year-old man named Dallas Wiens, was the first in the U.S. to receive a whole face transplant (albeit with less tissue taken than with Rodriguez’s transplants). When Wiens’ forehead brushed against a high-voltage electrical wire in 2008, he was blinded and his face utterly destroyed, melted like candle wax. In March 2011, Pomahac and his team of surgeons, anesthetists, and nurses replaced Wiens’ face in around 22 hours. The surgery “proved the facial artery technique could work,” Pomahac says.

Pomahac notes that nearly every face transplant patient experiences an episode of acute rejection at some point, but most can be healed with a stronger course of immunosuppressive drugs. He worries about the more radical aesthetics of transplant teams that replace all facial tissue.  These, he says, include Rodriguez and another Polish surgeon, Dr. Adam Maciejewski of the Cancer Center and Institute of Oncology in Glicwice, who transplanted a new face in 2013 onto a 33-year-old Polish stone-cutter whose machine had severed his facial tissue so severely it couldn’t be reattached.

“There are groups that keep pushing the aesthetic component,” Pomahac observes. “I don’t think there’s anything wrong with that, but the downside is that patients could end up with a worse problem if the transplant is rejected.“

In Dinoire’s case, the transplant lasted 10 years. While her surgeons were contemplating a partial replacement to her lips, she died of cancer. In the cases of even more dramatically extensive transplants—Richard Norris and Patrick Hardison, for example—Pomahac fears that immune system rejection means there is little to no bailout option, except, perhaps, for risky repeat surgeries. “In Norris’s case, the surgical team removed the upper and lower jaw and connected the new tissue; so the gentleman could have a giant hole and no facial skin as a result if his transplant fails,” he says.

Rodriguez believes that rejection can be managed. He says that acute transplant rejection can be treated with medications and, in many instances, avoided through careful screening. For example, Langone doctors treated Patrick Hardison with the drug Rituximab before his transplant operation, effectively eliminating his B cell lymphocytes that could have proven “antigenic,” or incompatible, to his transplant, according to pre-op tests. The B cells have since grown back normally, and Hardison is yet to show any signs of transplant rejection, according to Rodriguez.

“Acute rejection [is] likely a predictor of patients who are going to lose their allographs [transplants] with 10 years,” Rodriguez says. When chronic rejection happens, it’s not immediate, but a process that happens over months and even a year. This, he says, gives doctors time to consider options. “Will rejected transplants look the same as before?  No. Will patients live? Yes,” Rodriguez asserts.  If medication doesn’t work, surgery to replace damaged tissue is another option, although he admits no one has crossed that bridge as yet.

“The fear of a patient not living long with a transplant isn’t new,” Rodriguez says, referring to tissue transplants in general, including internal organs like kidneys and hearts. “In 2016, I would tell my patients the longest a face transplant is proven to last is 11 years (based on the Dinoire case). I even tell them they could potentially die in the operating room or as a result of complications related to this procedure. “

“I’m always concerned about the fears,” he continues. “But when a patient has had these horrific injuries, the consequence is that they want to look and feel normal again. Every member of our team is constantly explaining the severity and complexity of this procedure in addition to the consequences of long-term immune suppression medication.”

Still, the rare patient who makes it through the extensive face transplant screening process embraces the chance. For Patrick Hardison, life after his surgery returned to a new normal: He got his blink back. Rodriguez and his team successfully reconnected Hardison ‘s own surviving nerves and muscle remnants to the eyelids and blood vessels of the donor. Today, the Mississippi fireman has 20/30 vision. He can drive, spend time with his five children, visit and proceed with his business and life plans.

"After my accident, my life was really hard. I hated life," Hardison told The Telegraph earlier this year.  “I’m the same person I’ve always been, I’m the same guy ... I’m not some overnight sensation ... But I’m mobile now, I can do things ... I'm here today because I want others to see that there is hope beyond the injury." 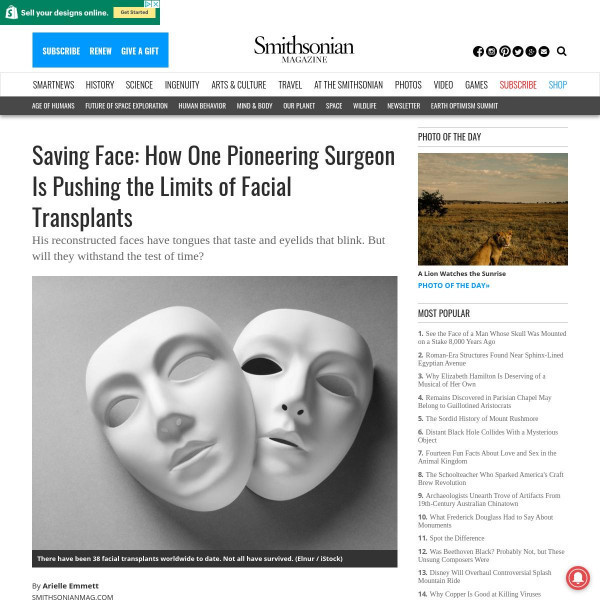