This figure is from the Smithsonian’s Hans Syz Collection of Meissen Porcelain. Dr. Syz (1894-1991) began his collection in the early years of World War II, when he purchased eighteenth-century Meissen table wares from the Art Exchange run by the New York dealer Adolf Beckhardt (1889-1962). Dr. Syz, a Swiss immigrant to the United States, collected Meissen porcelain while engaged in a professional career in psychiatry and the research of human behavior. He believed that cultural artifacts have an important role to play in enhancing our awareness and understanding of human creativity and its communication among peoples. His collection grew to represent this conviction.

The invention of Meissen porcelain, declared over three hundred years ago early in 1709, was a collective achievement that represents an early modern precursor to industrial chemistry and materials science. The porcelains we see in our museum collections, made in the small town of Meissen in Germany, were the result of an intense period of empirical research. Generally associated with artistic achievement of a high order, Meissen porcelain was also a technological achievement in the development of inorganic, non-metallic materials.

The Monkey Band, begun by Johann Joachim Kaendler (1706-1775) in about 1747 and completed by him with Peter Reinicke ((1715-1768) by 1766, was a very popular series. The nineteen figures were based on drawings by Christophe Huet (1692-1765) in the manner of his singeries, the painted interiors featuring anthropomorphic monkey figures in the Chateau of Chantilly north of Paris and in the Hôtel de Rohan in Paris itself.

A music stand in the Monkey Band identifies the figure group with the opera seria Lucio Pipirio Dittatore by Johann Adolph Hasse (1699-1783) premiered in Dresden in 1742. German by birth, Hasse was a prolific and highly successful composer in the Italian style, and with his equally successful wife, the singer Faustina Bordoni (1700-1781), he worked for several European courts, but composed and directed music for the Dresden court for most of his active career.

Like the chinoiseries, the singeries represented an exotic fantasy, but one that expressed a form of mockery of human behavior. Monkeys were exotic pets, and captive chimpanzees were a source of great interest because of their obvious kinship to humans that both fascinated and repelled Europeans. Where did a chimpanzee or a monkey stand in relation to the human species? Eighteenth-century naturalists asked questions that sought to throw light on the nature of being human, and they looked for answers and understanding in the behavior of other animals.

Meissen figures and figure groups are usually sculpted in special modeling clay and then carefully cut into separate pieces from which individual molds are made. Porcelain clay is then pressed into the molds and the whole figure or group reassembled to its original form, a process requiring great care and skill. The piece is then dried thoroughly before firing in the kiln. The figure is painted in overglaze enamel colors.

Go to the Rhode Island School of Design Museum for more information on the Monkey Band with a recording of the fragment of notes visible on the music stand: http://risdmuseum.org/notes/151_live_from_risd_its_the_meissen_monkey_band

On the modeling and molding process still practiced today at Meissen see Alfred Ziffer, “‘…skillfully made ready for moulding…’ The Work of Johann Joachim Kaendler” in Pietsch, U., Banz, C., 2010, Triumph of the Blue Swords: Meissen Porcelain for Aristocracy and Bourgeoisie 1710-1815, pp.61-67. 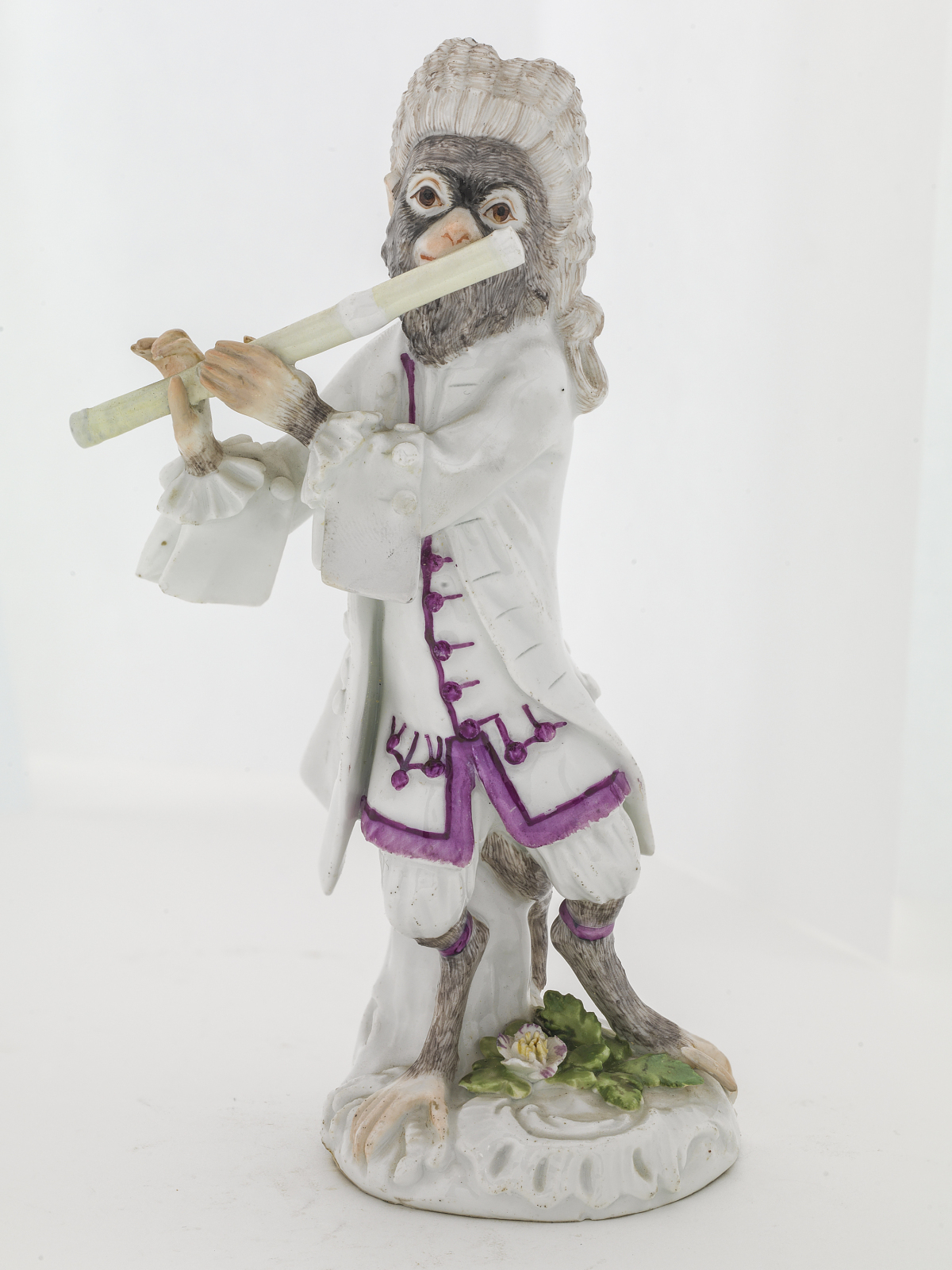 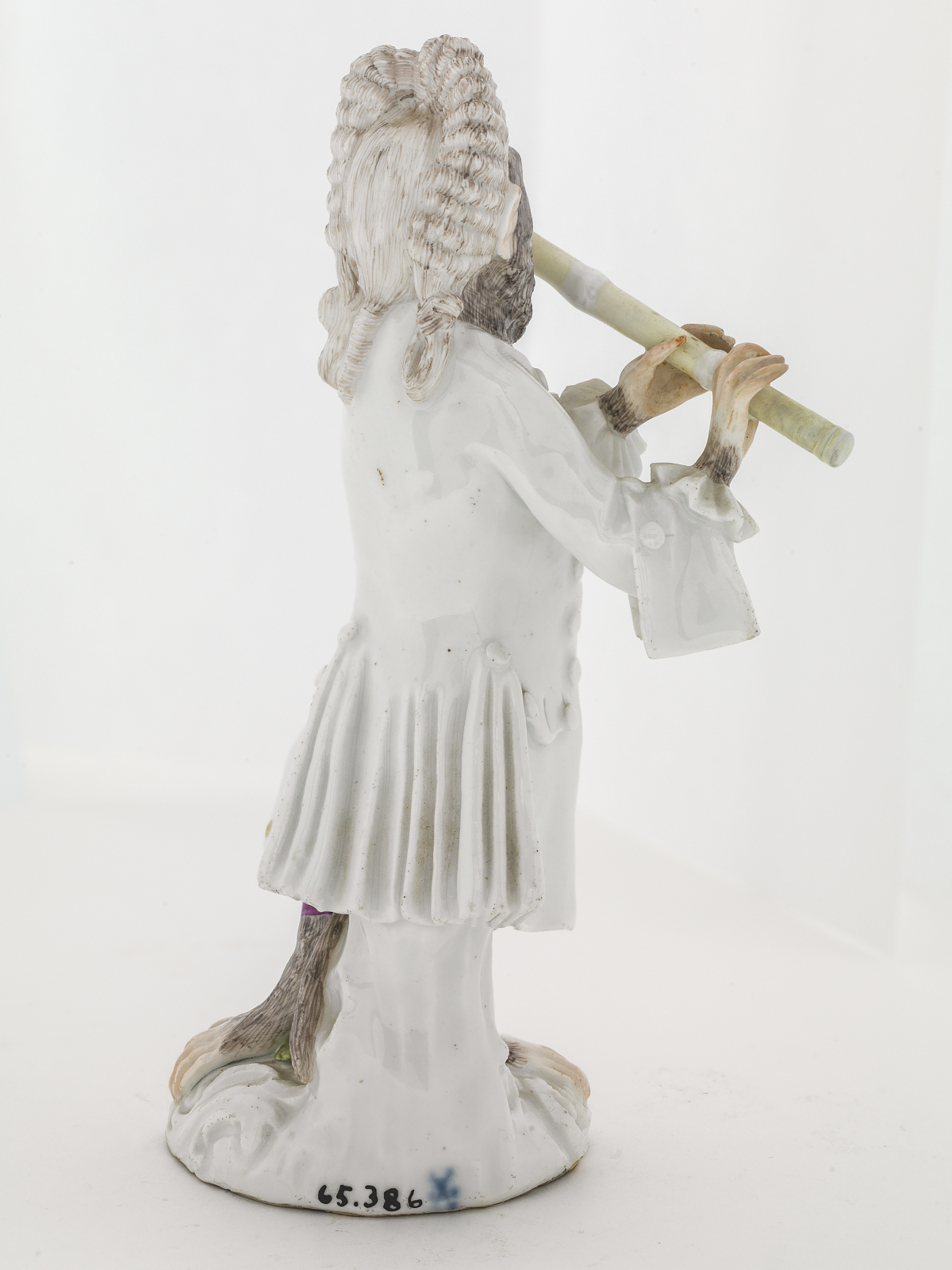