This plate is from the Smithsonian’s Hans Syz Collection of Meissen Porcelain. Dr. Syz (1894-1991) began his collection in the early years of World War II, when he purchased eighteenth-century Meissen table wares from the Art Exchange run by the New York dealer Adolf Beckhardt (1889-1962). Dr. Syz, a Swiss immigrant to the United States, collected Meissen porcelain while engaged in a professional career in psychiatry and the research of human behavior. He believed that cultural artifacts have an important role to play in enhancing our awareness and understanding of human creativity and its communication among peoples. His collection grew to represent this conviction.

The invention of Meissen porcelain, declared over three hundred years ago early in 1709, was a collective achievement that represents an early modern precursor to industrial chemistry and materials science. The porcelains we see in our museum collections, made in the small town of Meissen in the German States, were the result of an intense period of empirical research. Generally associated with artistic achievement of a high order, Meissen porcelain was also a technological achievement in the development of inorganic, non-metallic materials.

It can be assumed that this confectionary dish was copied at Meissen from a Japanese prototype in the Dresden porcelain collection. Painted in onglaze enamels it has an exotic phoenix-like bird facing a tree peony that rizes from behind a zig-zag of rice bundle fences. Recorded in the 1779 Dresden inventory of the porcelain collection are eleven items of various sizes featuring this particular “phoenix”pattern, and items with the inventory number 69 were confiscated from the property of Count Hoym who was complicit in the fraudulent acitivites of the Parisian dealer Rodolphe Lemaire. Lemaire sold Meissen imitations of Kakiemon style porcelains as original Japanese pieces, for which he could command a high price on the Parisian luxury market where Japanese porcelain was in high demand.

Rice bundle fences occur frequently in the enamel painted porcelains from Arita that were exported to Europe and they represent a garden landscape. This ancient method of fencing still in use today takes available brushwoods that are bound to horizontal lengths of bamboo and are favored in gardens surrounding tea gardens and temples.

Kakiemon is the name given to very white (nigoshida meaning milky-white) finely potted Japanese porcelain made in the Nangawara Valley near the town of Arita in the North-West of the island of Kyushu. The porcelain bears a characteristic style of enamel painting using a palette of translucent colors painted with refined assymetric designs attributed to a family of painters with the name Kakiemon. In the 1650s, when Chinese porcelain was in short supply due to civil unrest following the fall of the Ming Dynasty to the Manchu in 1644, Arita porcelain was at first exported to Europe through the Dutch East India Company’s base on the island of Dejima in the Bay of Nagasaki. The Japanese traded Arita porcelain only with Chinese, Korean, and Dutch merchants and the Chinese resold Japanese porcelain to the Dutch in Batavia (present day Jakarta), to the English and French at the port of Canton (present day Guangzhou) and Amoy (present day Xiamen). Augustus II, Elector of Saxony and King of Poland, obtained Japanese porcelain through his agents operating in Amsterdam who purchased items from Dutch merchants, and from a Dutch dealer in Dresden, Elizabeth Bassetouche.

On the Japanese Kakiemon style see Ayers, J., Impey, O., Mallet, J.V.G., 1990, Porcelain for Palaces: the fashion for Japan in Europe 1650-1750 and for an example of a Japanese dish with this pattern see p. 151; See alsoTakeshi Nagataki, 2003, Classic Japanese Porcelain: Imari and Kakiemon.

For an example of the pattern on a later plate see Pietsch, U., 2011, Early Meissen Porcelain: the Wark Collection from the Cummer Museum of Art and Gardens, p. 275.

On the impact of Chinese porcelain in a global context see Robert Finlay, 2010, The Pilgrim Art: Cultures of Porcelain in World History. 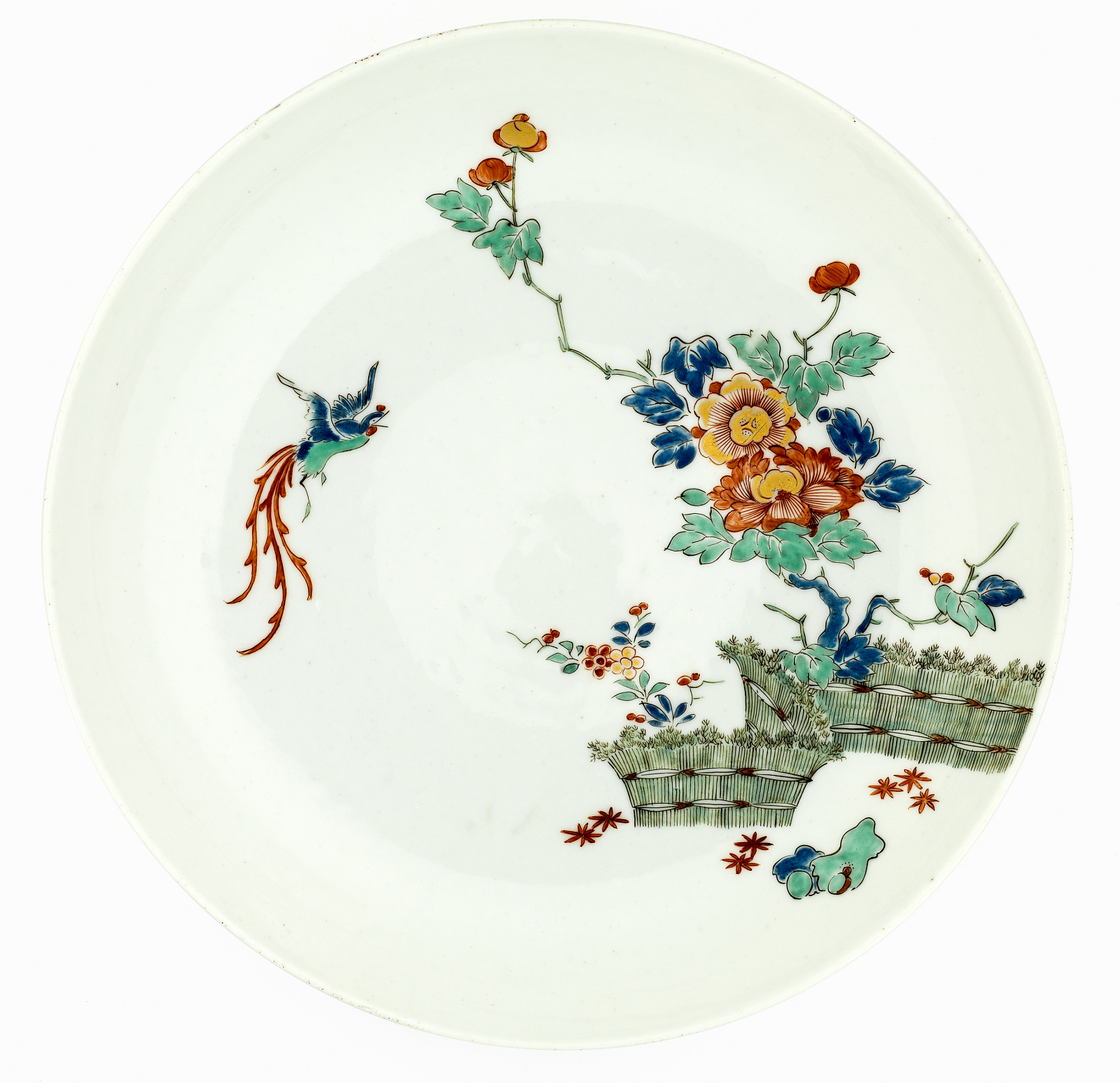