Al Capone is much more myth than man in the popular imagination. While the notorious gangster of 1920s Prohibition-era Chicago still lingers in our cultural consciousness, this image is one riddled with contradictions: of a mobster and a do-gooder; a man who sprayed silver bullets into the air from his car and helped feed the city’s poor as he orchestrated some of the most cold-blooded murders in Chicago’s history. Although he was only leader of the infamous “Chicago Outfit” for only six years, Al Capone has remained permanently enshrined as one of America’s most notorious criminals and still commands our attention almost a century later.

National Book Award-winning biographer Deidre Bair attempts to unravel this complex mythology of Capone in her latest work, Al Capone: His Life, Legacy, and Legend. “This is the story of a ruthless killer, a scofflaw, a keeper of brothels and bordellos, a tax cheat and perpetrator of frauds, a convicted felon, and a mindless, blubbering invalid,” Bair writes. Her biography draws on a rich—and, until recently, untapped—pool of resources: Capone’s remaining living relatives. Using interviews with Capone’s surviving family members, Bair attempts to humanize Capone, mapping out his close and important family bonds to his mother, wife, and son and exploring his later life, during which he developed severe mental impairments—a part of the narrative often excluded from his mythology.

Bair interviewed relatives and second- and third-generation Capone family members to try and build a picture that challenged the criminal Capone of popular imagination. But not every family member was willing to talk—many family members had changed their surnames and moved away from Chicago in the generations since the gangster’s death. Some spoke with Bair on the condition of anonymity, and as such, no names are given with some of the quotes Bair sourced. Many of the grandchildren of some of Capone’s former cronies were unwilling to speak with Bair, having promised their parents and grandparents to never discuss “business” outside the family. But the stories she extracts from the distant relatives who did talk help demystify many of the highly fabled stories around Capone—especially those that concern his sexual exploits, his kindness and charitableness, and the importance he placed on his family life.

Alphonse “Al” Capone was born in Brooklyn, New York, in 1899, the son of Italian immigrants. After being kicked out of school in the sixth grade, he joined one of the borough’s tough teen gangs. At age 15, Capone began working for Johnny Torrio, one of the city’s most notorious Italian-American gang leaders, helping him in his many mob outfits including brothels and bars. Unlike Capone’s six brothers and two sisters, Al embraced the cultural myth of the American Dream, seeing himself wholly as an American. When anyone called him an “Italian,” writes Bair, he would say, “I’m no Italian—I was born in Brooklyn.”

Bair writes that Capone was propelled to the “illegitimate” life out of necessity. His father died when Capone was 21 and he was the child tasked with providing for the family. Capone was fiercely devoted to his mother, writes Bair, calling her on a daily basis while he began a career as a mobster. It was this commitment to his family—especially this love for his mother—that prompted Capone to create a divide between “work” and home life in an effort to protect the welfare of his family and shield them from his growing criminal exploits. Capone adopted this approach from his mobster mentor Johnny Torrio, who believed work and family should never mix, telling Capone to “keep your hands clean” and use others do your “dirty work.” According to Bair, the surviving members of Capone’s family believe that, were it not for his father's death, Capone might have become the respectable businessman he always aspired to be. “The mantle of criminal greatness was thrust upon his unwilling shoulders,” Bair writes.

After his marriage to wife Mae in 1918 and the birth of his only son, Sonny, Capone still remained a notorious womanizer. Bair is able to detail much of this thanks to relatives’ stories about his sexual deeds. This kind of philandering gave Capone syphilis, which he then passed on to his wife. Bair writes Capone did not seek treatment in spite of enduring painful sores, rashes, and regular flu-like symptoms because in doing so, he would then need to tell his wife about his adultery: To admit to having an STD was admitting to adultery itself. Later in life, untreated syphilis proved to be Capone’s undoing, completely deteriorating his mental faculties.

After Torrio gave Capone the reins of the organized crime syndicate, the Chicago Outfit, in 1929, Capone conquered the city through a sophisticated network of brothels and speakeasies. By 1929, he had accumulated a net worth of over $40 million—approximately $550 million today—and associations with over 700 murders. Capone also controlled the sale of liquor to over 10,000 speakeasies. “I make money by suppling a public demand,” Capone told a reporter at the time. “If I break the law, my customers…of the best people in Chicago are as guilty as me.” To help maintain his reign, Capone often paid off top city officials, rigged local elections, and sometimes even kidnapped workers and henchmen from rival outfits.

Image by Courtesy of Nan A. Talese. The true flesh-and-blood man behind the legend has long remained a mystery. (original image)

But in her book, Bair offers a new history of Capone, and separates fact from fiction in the process. For example, she tackles one story claiming Capone kept a 15-year-old female mistress in an apartment during his early years in New York, a tale Bair points out was impossible since Capone could not have afforded to do so, despite numerous biographies that purport it as truth.

Bair also upholds certain enduring legends, like Capone’s supposed wish that he had started in the milk business before the beer business, since milk was always in demand and far easier to trade in than alcohol in Prohibition Chicago. Further, Bair explores the legend that has it Capone was the one responsible for putting expiration dates on milk bottles in Chicago, which it turns out has some kernels of truth. Along with his brother, Capone did indeed open own dairy farm and manufactured milk that was sold in bottles with expiration dates. The rumor says that Capone pushed for expiration dates because one of his relatives got sick from drinking milk, but Bair, based on conversations with Capone's descendants, believes it was a first step toward becoming a more legitimate businessman.

While the infamous St. Valentine’s Massacre of 1929 is part of Capone’s common image—an event whereby he orchestrated the murder of seven rival gang members—Bair argues that it’s his family that defines him. His descendants report that his unwavering and enduring devotion to both mother and wife demonstrate his true persona, an identity they believe has now been completely eclipsed by his gangland legacy. They share that he loved to fish, would joyously sing at family functions, and had an intense passion for writing music.

Later in life, Capone’s 11-year prison sentence—ironically handed down for tax evasion rather than for any of the many murders he coordinated—saw him mentally unravel, a result of his untreated syphillis. Capone left prison with the mind of a childish twelve-year-old in 1939. Bair shares stories of Capone being cared by wife Mae and his brothers after his imprisonment, spending his days at home in pajamas and having imaginary conversations with long-dead colleagues or enemies in their back yard, delusions the entire family went often along with. At age 48, Capone died on January 25, 1947 of a stroke.

Bair's Capone is powerfully human, a daunting task given his infamous pop culture stature and her biography reminds us that even though Capone was one of the most notorious mobsters in America’s history, he spent more time in prison than actually running illegal bootlegging operations in Prohibition Chicago, ending his life a “blubbering, babbling” mess.

“Was he a mobster? Yes. Was he a monster? No,” one relative tells Bair. Since Capone is such a wealth of contradictions, Bair believes “the only certainty is that as time passes and the man who was Al Capone recedes into history, the legend shows no sign of stopping.” 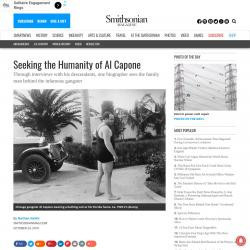