Understanding the Gospel of Nat Turner

On August 27, 1831, the Richmond Compiler asked: “Who is this Nat Turner?” At the time, Turner was hiding in Southampton, Virginia, not far from the site where he launched the most important slave revolt in American history. Nat Turner’s Revolt, which had taken place just five days earlier, had left more than 50 whites dead; by the time the trials finished, a similar number of suspected rebels were either killed extra legally or condemned and executed.

Even when Nat Turner was captured, on October 30, 1831, the Compiler’s question had remained unanswered. As a result, a white lawyer, Thomas R. Gray, arranged to go to the jail where Turner was held awaiting his trial and take down what Turner described as “a history of the motives which induced me to undertake the late insurrection.”  Over the last decade, scholars working with other sources and doing close textual analysis of The Confessions of Nat Turner have become increasingly confident that Gray transcribed Turner’s confession, with, as Gray claimed, “little or no variation.”

While The Confessions of Nat Turner remains the ur-text for anyone who wants to understand Nat Turner, this 5,000-word account creates as many questions as it answers. As a result, the document has become a springboard for artists who want to imagine the life of the most famous American to rebel against slavery.  In 1967, the novelist William Styron published a novel based upon Turner’s Confessions.  The novel both won immediate acclaim including a Pulitzer Prize and caused an uproar, as black scholars including John Henrik Clarke took issue with the way that Styron imagined that the rebel leader was inspired in part by his frustrated sexual longings for a white woman.

This week, a new re-imagining of Nat Turner’s story hits the big screen as Birth of a Nation opens in theaters nationwide.  Filmmaker and actor Nate Parker portrays Southampton’s most famous son as a “warm, encouraging preacher,” in the words of the New Yorker’s Vinson Cunningham.  Nate Parker portrayal highlights the religiosity of the slave rebel leader whose personal Bible has been put on display for the first time at the Smithsonian’s new National Museum of African American History and Culture.   But what do we really know about Turner’s religion?

Most slaves could not read.  Some of them owned Bibles anyway, which could then serve as tangible reminders of the “Good News” contained within. Turner, on the other hand, learned how to read as a child, and his Bible was the book that he knew intimately.  When captured after the revolt, Turner readily placed his revolt in a biblical context, comparing himself at some times to the Old Testament prophets, at another point to Jesus Christ. In his Confessions, Turner quoted the Gospel of Luke twice, and scholars have found many other passages in which his language echoed the language of the Bible including passages from Ezekiel, Joshua, Isaiah, Matthew, Mark, and Revelation. Like many 19th-century American Protestants, Turner drew his inspiration and much of his vocabulary from the Bible.

While Turner valued the Bible, he rejected the corollary that scripture alone was the only reliable source of guidance on matters religious and moral.  Turner believed that God continued to communicate with the world.  Turner describes two other ways that God communicated with him. First, God communicated directly to him: at one point, “the Lord had shewn me things that had happened before my birth.” At another point, “the Holy Ghost had revealed itself to me.” On May 12, 1828, “the Spirit instantly appeared to me.” When asked by Gray what Turner meant by the Spirit, Turner responded “The Spirit that spoke to the prophets in former days.” Turner saw himself as a modern prophet.

Turner believed that God also communicated to him through the natural world. His neighbors saw stars in the sky, not realizing that according to Turner, they were really “the lights of the Saviour's hands, stretched forth from east to west.”  More often Turner looked at prodigies—or unusual natural phenomena—as indirect messages from God.  In a field one day, he found “drops of blood on the corn as though it were dew from heaven.”  When he saw “leaves in the woods hieroglyphic characters, and numbers, with the forms of men in different attitudes, portrayed in blood,” he was reminded of “figures I had seen in the heavens.”

The most consequential signs appeared in the months prior to the revolt. In February, Southampton, located in southern Virginia, experienced a solar eclipse, which Turner interpreted as a providential signal to start recruiting potential rebels. With the eclipse, “the seal was removed from my lips, and I communicated the great work laid out for me to do, to four in whom I had the greatest confidence,” the first conspirators to join his plot. In August, a sun with a greenish hue appeared across the eastern seaboard. Turner immediately understood this peculiar event as a signal from God that the time to begin the revolt had arrived.

Turner’s views on private revelation were not unlike those of his contemporaries Joseph Smith, the founder of Mormonism, and William Miller, the father of the Adventist movement. Turner’s views were clearly unacceptable to the whites who controlled Southampton’s interracial churches.  Throughout the region, Protestant churches run by whites ministered to both whites and blacks.  Often these churches’ black members met separately from its white members, but on communion day the entire church black and white came together to commemorate Jesus’s last supper.  When Turner tried to join one of these churches, the church refused to baptize the religious slave who saw himself as a prophet.

Although it is not surprising that whites rejected Turner’s religious views, they were also suspect in the black community. In part, this was because at one point his vision seemed too close to the proslavery religion that most slaves rejected.  While he was in his 20s, Turner ran away from his owner.  When he was in the woods, the Holy Spirit appeared to Turner and ordered him to “return to the service of my earthly master—‘For he who knoweth his Master's will, and doeth it not, shall be beaten with many stripes, and thus, have I chastened you.’”  When the slaves heard Turner quote the slaveholders’ favorite passage from Luke, the slaves themselves rejected Turner’s claims to prophesy.  “The negroes found fault, and murmurred against me, saying that if they had my sense they would not serve any master in the world.”

This was not the only time that the religious Turner found himself at odds with the men who would join his revolt.  In the spring of 1831, when Turner and his co-conspirators were deciding the day for the revolt, the rebels selected Independence Day with its obvious political resonances.  Turner, who saw the revolt in Biblical terms, never reconciled himself to this date. As July 4th approached, he worried himself “sick” and postponed the revolt.  Likewise, on August 21, 1831, Turner met for the first time rebels whom he had not personally recruited.  He asked Will—who would become the most enthusiastic of the rebels—why he joined the revolt. Will responded “his life was worth no more than others, and his liberty as dear to him.” Will professed no loyalty to Turner and gave no hint that he believed in Turner’s religion.  Perhaps for similar reasons, when blacks referred Turner at the trials, they called him Captain Nat or General Nat, instead of alluding to his religious position as a preacher or a prophet.

Perhaps Turner’s religious separation from the black community can help make sense of perhaps the most surprising thing about Turner’s religion: the only disciple that Turner named in his Confessions was Etheldred T. Brantley, a white man.  While there was a tradition of white anti-slavery in the region—only five years before the revolt, Jonathan Lankford was kicked out of Black Creek Baptist church for refusing to give communion to slaveholders—it seems unlikely that Brantley, who was not involved in the revolt, was converted by Turner’s antislavery.  Instead it seems more likely that Brantley was drawn by Turner’s millennialism, Turner’s ability to convert Brantley’s heart, and Turner’s success in stopping the outbreak of a disease where blood oozed from Brantley’s pores.

Turner always understood his revolt in religious terms.  When Turner was locked in prison, facing a certain date with Southampton’s executioner, Gray asked, “Do you not find yourself mistaken now?” Turner responded, “Was not Christ crucified[?]”  For Turner, but not necessarily for everyone who joined his revolt, the Southampton Revolt was part of an unfolding modern biblical drama.

Patrick H. Breen teaches at Providence College.  His book, The Land Shall Be Deluged in Blood: A New History of the Nat Turner Revolt, was published by Oxford University Press in 2015. 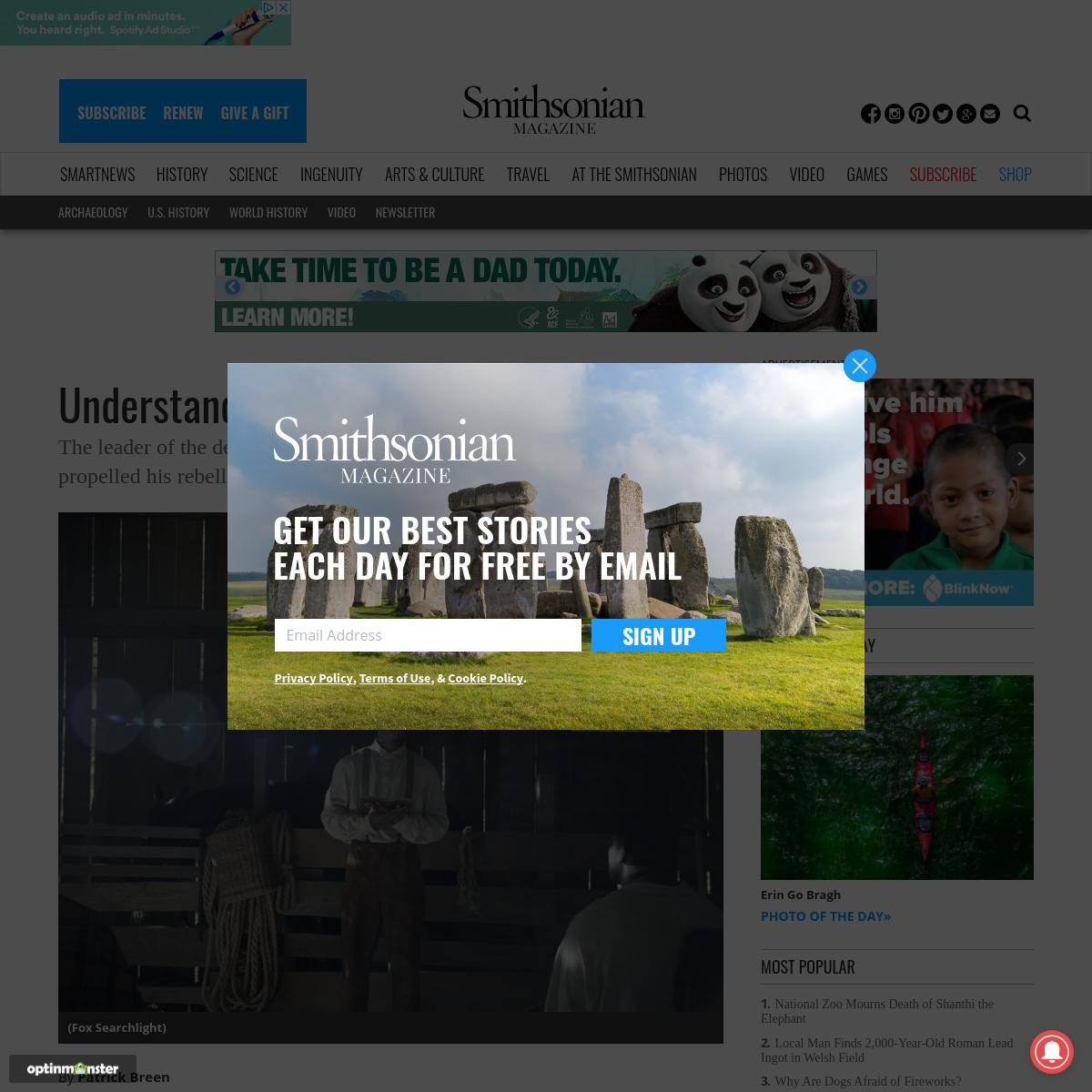