Max Ventilla is a great believer in using technology and data to zero in on what attracts and motivates people, and in identifying their comfort zones.

That, after all, was the essence of his previous job as a Google executive in charge of personalization. His group developed user profiles based on a person’s behavior on different Google properties, from Gmail to YouTube, and used that to customize search results.

So it probably shouldn’t come as a surprise that when he and his wife were looking at pre-schools for their daughter, he started to think in a similar way about how kids learn.

“The world in which my daughter is growing up is really different from the world I grew up in. And it seems like schools should be different, since their purpose is to prepare kids for the future, not the past,” he says.

Why, he wondered, do schools continue to treat students as if they all liked the same thing and learned the same way?

It was a simple, yet confounding question, one that ultimately led to the launch of AltSchool, a business that has, since 2013, opened eight private schools in California and New York. All are small operations—the largest, which opened in San Francisco last month, has about 75 students. There are no formal grade levels; instead students are divided into three broadly-defined groups—foundational elementary, upper elementary and middle school. So far, none of the 450 kids attending the schools has been older than 14.

But in response to Ventilla’s concern about what he saw as a cookie cutter approach to education, AltSchool classrooms are designed as little learning labs. Each student works with a highly individualized “playlist,” a personalized lesson plan based not just on his or her interests, but also how and under what conditions he or she is most motivated to learn. Does working in a group bring out their best, for example? Or, maybe they’re more productive when they engage with just one partner, or work alone?

And, true to Ventilla’s Silicon Valley roots, the AltSchool experience is built on a heavy base of technology. Not technology as defined by kids looking at screens, but rather as a way to gather meaningful data about how kids learn, and to help teachers track students’ progress more quantitatively, and on a daily basis. Everything that happens in an AltSchool classroom, for instance, is recorded by custom-built cameras and microphones, with the purpose of allowing teachers to go back and try to identify when and why a student made strides in a particular subject. This innovative take on education is featured in a NOVA special, “School of the Future,” about some of the science and solutions that could redesign American education, airing on PBS at 9 p.m. ET tonight. Viewers can stream the full, two-hour special starting tomorrow.

Ventilla talks about educators becoming “data-driven detectives,” and the collaboration of AltSchool teachers with the company’s engineers epitomizes that shifting role—the company has almost as many of the latter as the former. The goal is to develop a feedback loop that fosters constant tweaking. On one hand, the developers are charged with coming up with tech methods that simplify or reduce teacher tasks that don’t have much to do with teaching. On the other, they’re tapping into the teachers’ experience in evaluating student performance and identifying progress, and using that knowledge to create the kind of metrics that can be passed on. That, says Ventilla, is how knowledge gained from an AltSchool classroom could be used to help a similar type of student in a similar situation, but in a different school.

The goal of sharing what it learns about learning with outside schools is very much a focus of AltSchool right now. While it plans to open two more of its own schools next fall—another one in Manhattan and the first in Chicago—more of the emphasis will shift to developing a network of partner schools.

Last spring, at the SXSW Conference in Austin, Texas, AltSchool kicked off what it calls Phase 2 of its business plan when Ventilla announced the launch of AltSchool Open. The first step was to solicit potential partners—other private schools that were interested in adopting the AltSchool model and licensing its software.

Almost 200 schools responded, according to AltSchool Chief Operating Officer Coddy Johnson, and over the past six months, that list has been winnowed down to a handful. A final selection of its first partners is expected in the next few weeks.

Most likely, they will be other small private schools that place high priority on empowering students through more personalized learning. To start with, says Johnson, it might be just one partner school.

“We’re taking a long view,” Johnson explains. “We believe this is a decade-long process to get right. And the thing we worry about early on is that if we prioritize scale over quality and learning, we will have to go back and fix a bunch of things.”

Each student works with a highly individualized “playlist,” a personalized lesson plan based not just on his or her interests, but also how and under what conditions he or she is most motivated to learn. (AltSchool)

AltSchool partners, he says, will gain access to the company’s proprietary software enabling them to develop a “portrait” of each student as a learner, both academically and emotionally, and also create “playlists” for every kid, based on his or her portrait. This would include curriculum, activities and projects that, based on data analysis, would likely help that particular student learn better and grow.

AltSchool would also provide training to teachers at partner schools, ensuring that they use the software tools effectively and working with them to personalize the learning process. Plus, it would share reports on its own best practices on everything from truly effective study projects to the logistics of student pickups and drop-offs.

“We don’t want them to feel like they’re standing alone in tackling problems,” says Johnson. “We know they’re dealing with the same challenges we’ve faced in personalizing education, but they haven’t had the benefit of a bunch of venture capital to build the program right.”

Planning for the future

Johnson is referring to the hefty dose of funding—an estimated $133 million in venture capital and venture debt—that AltSchool has received from some of Silicon Valley’s big name investors, including Facebook’s Mark Zuckerberg.

That’s based on the company’s long-term strategy of one day being able to license its software and data analysis of individualized learning to public school systems. That’s still a ways off, at least five to seven years, estimates Johnson. The idea is to first build out a network slowly.  “We’ll start with schools that look like ours,” he says, “but want to expand the frontier each year, from more progressive charter schools to more progressive public schools to more traditional schools.”

Initially, the focus will be on refining the AltSchool model so that it zeroes in how to make personalized education most effective for all kinds of students. But eventually, as the partner network grows, the data gathered from outside schools—anonymized to protect the identities of students—will be added to the mix. And that, suggests Johnson, would continue to increase the quality and breadth of what’s known about learning.

“We hope that approach can be increasingly embraced by school systems and by doing that, you advance education to a place where every student you add makes the system better,” he says.

For his part, Ventilla, the company’s founder and CEO, believes AltSchool’s emphasis on “social and emotional learning” is better suited for the workplace of the future, one in which both collaboration and being entrepreneurial will likely be much valued. And, he says, it’s important for children to be educated in a dynamic environment, where change is a constant.

“We’re creating an environment that accustoms kids to what it’s like to operate with a lifelong growth mindset. And what it’s like to be around people working in a 21st century manner,” Ventilla says. “When you're talking about kids under the age of 10, they learn primarily through osmosis. They don’t learn by being told. They learn by seeing what’s around them.” 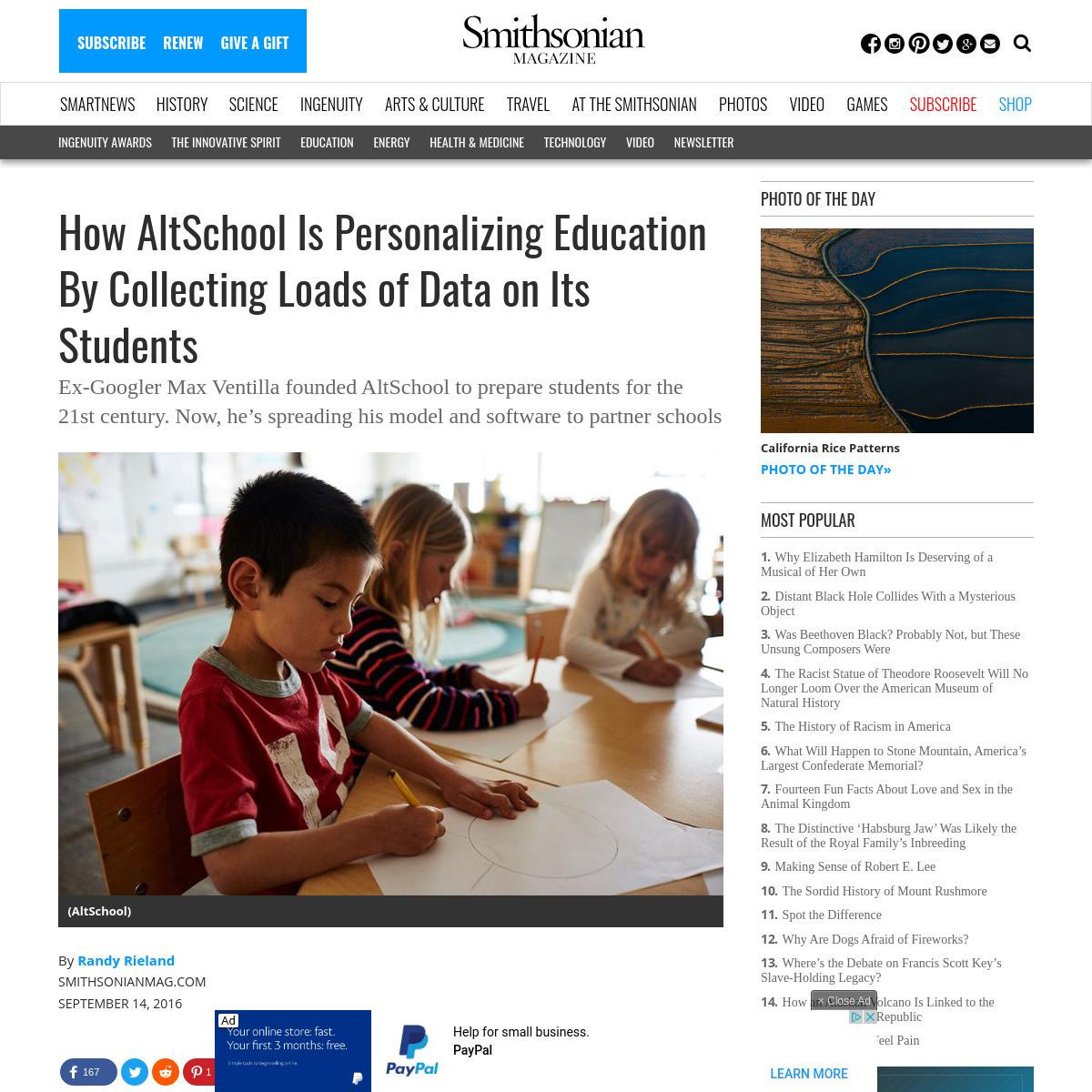