Change Author / Owner : Meet the Diverse and Bizarre “Stars” of the Deep Sea

Fragile and otherworldly, the brittle star is named for its delicate, spindly limbs. A member of a group called the Ophiuroids, this lesser-known cousin of the sea star lurks throughout the ocean bottoms, even thriving in the dark, cold and nutrient-poor reaches of the deep sea.

With upwards of 2,000 living species, brittle stars are providing scientists with a glimpse into the diversity of the oceans—particularly the motley crew of deep sea creatures found more than a mile beneath the water’s surface, a distance of 10 Washington Monuments stacked atop one another.

“The deep sea has been a bit of a mystery until now” says Timothy O’Hara, deputy head of marine sciences at Museum Victoria in Australia. Oceanic expeditions, costly and time intensive, have only sampled a fraction of the great blue seas.

So with the brittle stars as his muse, O’Hara is leading an effort to develop a database of marine biodiversity worldwide. His team’s global map of brittle stars, published today in Nature, could help lead future conservation efforts as changing climate and human development threaten deep habitats.

Since tackling every ocean species worldwide is a monumental task, O’Hara and his team focused on the humble brittle stars, collecting historical records from 1,614 oceanic expeditions spanning the last century.

Map of all where historical expeditions collected each of the 2,099 species used in this study. Yellow indicates samples taken at depths greater than 1.2 miles. (Tim O’Hara)

But these records were often riddled with inaccuracies, both because of changes in species names and misidentifications. So the scientists visited museums around the world—in Moscow, Tokyo, Berlin, Washington, D.C., and more—to examine first hand the species described in the records.

In the end, they compiled a global database detailing the distribution of almost a million brittle and basket stars—brittle star relatives with impressively branching limbs. But the data was still spotty.

“You have these snapshots of what is down there on the deepest part of the ocean and somehow you have to extrapolate,” says biologist Camilo Mora who studies biogeography at the University of Hawaii at Manoa.

So the researchers turned to some “pretty fancy statistics” to overcome the patchiness, O’Hara explains. The image that emerged revealed that patterns of biodiversity unexpectedly differ at different water depths.

On land, the tropics burst with biodiversity. This is where you find the Amazon, for instance. But as you move to the poles, the variety of species declines. The same pattern was previously assumed to hold in the oceans.

Creatures that linger in waters up to a mile down follow this pattern, but the denizens of the deep don’t. In the ocean’s depths, biodiversity peaks in a band found between 30 and 50 degrees both north and south of the equator, O’Hara and his team found.

Scientists have long linked biodiversity with the sun. Brilliant sunlight spurs plant growth, allowing energy to ripple up the food chain. And since the tropics get the most sunlight, that region gets the most energy deposited into its system, driving a diverse web of species.

But sunlight doesn’t penetrate much below a half mile deep in the ocean. Deep-dwelling creatures mainly feast on a steady rain of dead phytoplankton—microscopic algae that grow on the surface. Phytoplankton derive their energy from the sun, but sunlight is only one ingredient; these organisms also need nutrients. The region where the brittle star biodiversity peaks is an area rich in nutrients.

The study, of course, isn’t without caveats. The records spanned more than a century of exploration, and it’s possible that species diversity may have changed over that time. The need for statistical extrapolations also has its limitations.

“There are always going to be concerns...with this kind of analysis when you are dealing with data that are so disperse and limited,” says Mora, who was not involved in the study. “Of course it’s possible that [the patterns] could change as we add more data,” he notes.

But the need for the high powered statistical methods is a reality of the field. And the methods O’Hara and his team used are among the best that can be done with the available numbers, Mora adds.

“It costs a fortune to go to sea,” says O’Hara. He ballparks that researchers would need $4 to $5 billion to resurvey the entire planet and collect the same number of samples collected in the past. His team’s study was possible only due to the carefully preserved specimens housed in museums around the world.

“Our collections are not simply a bunch of old things that are getting dusty,” says David Pawson, a senior scientist at the Smithsonian’s National Museum of Natural History. As this study shows, they are an often untapped wealth of information.

O’Hara has great ambitions for the future of this project. “This is just the first step,” he says. The team hopes to get a better handle on the boundaries for the ranges of specific species as well as trace their genetic ties.

This project is an important step in learning to care for the deep sea. “We’ve done essentially nothing for deep sea conservation,” says Pawson. But such efforts become increasingly vital as fishing and mining operations encroach on these relatively untouched habitats. 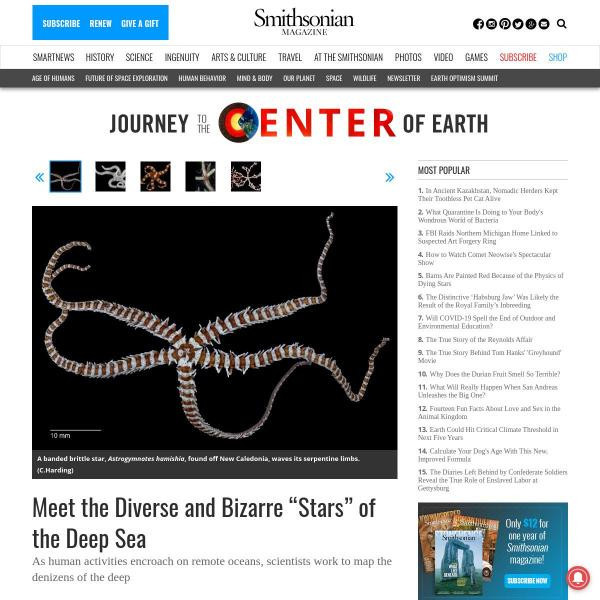