A chittering dolphin can sound like a bunch of monkeys jumping on a deflating rubber raft—trills, squeaks, whistles and clicks.

These creatures have honed this cacophony over millions of years to survive in their watery world. Both dolphins and toothed whales can use the returning staccato from their highest-frequency clicks to echolocate, identifying the size, shape, direction and even speed of fleeing prey.

But after decades of research, how exactly they produce these high-frequency noises remains unknown. And a group of scientists are pointing to snot as the ingredient that gives the cetaceans the extra oomph required to go ultrasonic.

Dolphins make sounds varying in frequency depending on the animal’s purpose. Human hearing maxes out around 20 KHz, so we can usually hear a dolphin’s clicks and trills, which are thought to be used for communication. But when echolocating, dolphins turn up the frequency to the ultrasonic range. A dolphin’s staccato can clock in around 100 KHz—higher than a dog whistle.

Even so, “you can’t make [the sound of] a dog whistle just by whistling,” says Aaron Thode, researcher at Scripps Institution of Oceanography. But mix in a bit of snot and the situation could completely change.

Dolphins make their noises with the use of a set of fat-filled strips called dorsal bursae located beneath the blowhole. This nasal cavity is sealed by a pair of lips that resemble and are commonly called “monkey lips,” explains Thode who presented the mucus hypothesis this week at the 171st Meeting of the Acoustical Society of America in Salt Lake City, Utah.

To click underwater, dolphins push air through these monkey lips into the empty cavity below the sealed blowhole. “If you put your own lips together and squeeze them, you make the raspberry sound, right?” says Thode before making flatulence noises. “That's effectively what [scientists] think the dolphins are doing.”

Yet how they go from blowing raspberries to dog whistles is a little less clear and has long eluded scientists. About 15 years ago, researchers with the Office of Naval Research tried and failed to mechanically recreate the echolocation clicks, says Thode. Even now, no one has been able to make the sound mechanically.

The Navy actually employs a small force of dolphins to use their mastery of echolocation to safely identify objects such as buried landmines, says Ted Cranford, a marine biologist at San Diego State University. “The animals don’t make many mistakes,” he says. “But man-made sonar systems are not error-free.”

So the hope was to tap into the dolphin’s skill and improve human sonar systems, says Cranford, who was part of that early ONR project. It was while examining these clicks using endoscopes that Cranford and Thode got the idea that the mucus coating on the monkey lips may be more than just slime.

But actually testing what the mucus does to the click is a whole different story. The sounds are short and rapid fire. Dolphins can generate hundreds of clicks in a single second. “It’s difficult to get a handle on a process that happens so quickly,” says Cranford.

Since that time, Cranford has moved on from snot, but the idea stuck in Thode’s head. Using new sound analysis technologies, he and his collaborators diagrammed the burst’s staccato and created a basic model to try to explain how it comes to be.

They broke down the profile of dolphin clicks and found that it often happens in two parts. Initially there’s a thump, which is followed by a ring. This is similar to hitting a bell with a hammer—the hammer strikes to produce a thump, then bounces off allowing it to vibrate in a ring, he explains.

Yet the researchers couldn’t produce a similar set of sounds at a high enough frequency until they added a high-viscosity substance to their model. Adding snot to the mix of equations pushed the sounds into the ultrasonic range.

But why would snot matter? The dolphin’s monkey lips have a loose layer of skin on top, Thode explains. The mucus is likely causing the lip surfaces to stick together. When the lips let go, they do so with a snap, producing an ultrasonic sound. Using this model they were also able to explain some of the variability in dolphin sounds.

“You just can't bang two billiard balls or whap together two very dry pieces of tissue and generate what you [hear] coming out of a dolphin,” he says. “There's going to have to be something going on on that small scale with some loose tissue and sticky snot.”

Notably, however, this idea has not yet gone through peer review, the rigorous process research undergoes that allows other scientists in the field to weigh in. Even so, the idea is an intriguing one, says Paul Nachtigall, a biologist that specializes in marine mammals at Hawaii Institute of Marine Biology, who was not involved in the research.

There’s incredible detail in the “acoustical masterpiece” that is echolocation in both the outgoing clicks and the ways dolphins process the returning whispers. Nachtigall emphasizes that no single thing will explain cetaceans’ spectacular acoustic gymnastics.

“Lots of people are looking for the silver bullet,” he says. “They’re looking for one thing to say, “I found why dolphin echolocation is so fantastic—this is it.’ But I think there has to be many, many, many ‘this is its.’”

Part of the problem, says Cranford, is that the creatures are often studied sitting still in a tank, which is an utterly unnatural state for dolphins. They usually live in groups, constantly traveling and moving. When they echolocate, their bodies are flexing and gliding through the water.

“In order to simplify it—so that we can try to at least get an inkling of what is going on—we have to get them...to sit still,” he says. But because of this, “you’re not getting the whole picture. You’re getting this little, tiny sliver of what they can do.”

“It’s going to take a while to unravel this whole thing,” says Cranford. But already over the decades of work scientists have slowly started to tease out the dolphin’s complexities—right down to the importance of their snot. 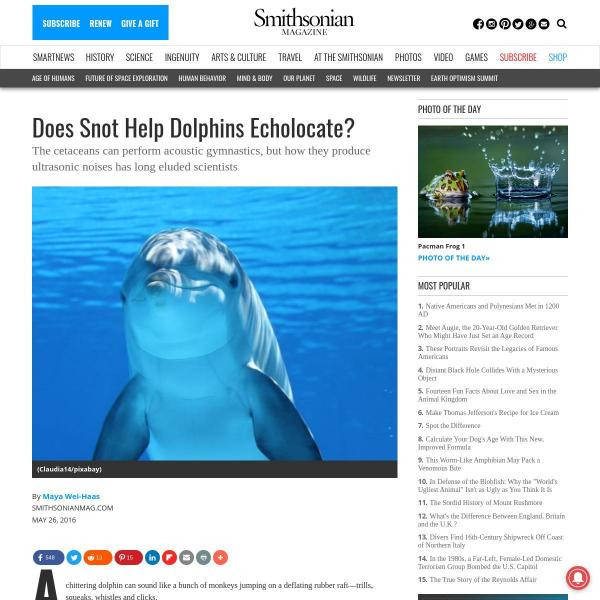