Visitors to the upcoming Innovations in Flight Family Day and Outdoor Aviation Display at the Steven F. Udvar-Hazy Center in Chantilly, Virginia, on June 18, are in for a real treat.

In addition to the wide variety of aircraft that will fly in for the event and the other special programs planned, Andrew Richardson, the owner of Adams Balloons LLC of Albuquerque, New Mexico, will be making tethered flights with a new Smithsonian hot air balloon, weather permitting.

Realizing that the museum had a beautiful example of a classic Adams wicker balloon basket on display at the Udvar-Hazy Center, Richardson asked if it would accept a modern hot air balloon envelope sporting the Smithsonian logo and colors into the collection.

While the museum has a world-class collection of balloon baskets and gondolas, we did not, in fact, have an envelope—the bag that contains the heated air. Anxious to fill that gap, we quickly accepted Richardson’s generous offer.

As a historian of lighter-than-air flight, I would like to point out that this is not the first Smithsonian balloon. In May 1859, John Wise, the leading American aeronaut of the day and a friend of the Smithsonian's first secretary Joseph Henry, took to the air in a hydrogen filled balloon named Smithsonian and decorated with the motto, “Pro Scientia et Arts.”

For some time, Henry and Wise had been discussing the utility of balloons in the scientific exploration of the upper atmosphere. Wise first flew this new craft from the Centre Square of his hometown of Lancaster, Pennsylvania, rising into the teeth of a thunderstorm.

Having noticed some remarkable phenomena during this voyage, such as an incipient thundercloud—the formation of a water-spout hanging down from this cloud—the increase of the cloud into a regular thundergust, and while sailing in the trail of the storm, that is in the rear of the ascending vortex, encountering large drops of rain dashing against the balloon and scintillating fire as they struck the balloon, it is needless to say I hurried down upon that demonstration.

Upon reading Wise’s report of the inaugural voyage of the balloon Smithsonian, Henry informed the balloonist that he would have “a few weeks of vacation” in the summer of 1859, and suggested that he “would be pleased to make some of the experiments with you which we contemplated last summer.”

It was not to be, however. Wise spent the summer of 1859 preparing to fly a balloon from St. Louis to the Atlantic coast, while Henry, whatever his dreams of aerial adventure, continued to struggle with his administrative burdens. Addressing a scientific meeting in June 1859, the Secretary noted that the, “observations of Mr. Wise have been of very great value.”

No images of that first Smithsonian balloon have survived. You can bet, however, that visitors to Innovations in Flight Family Day will take a great many photos of this colorful new addition to the Museum’s collection.

A version of this article was previously published on the National Air and Space Museum’s blog. 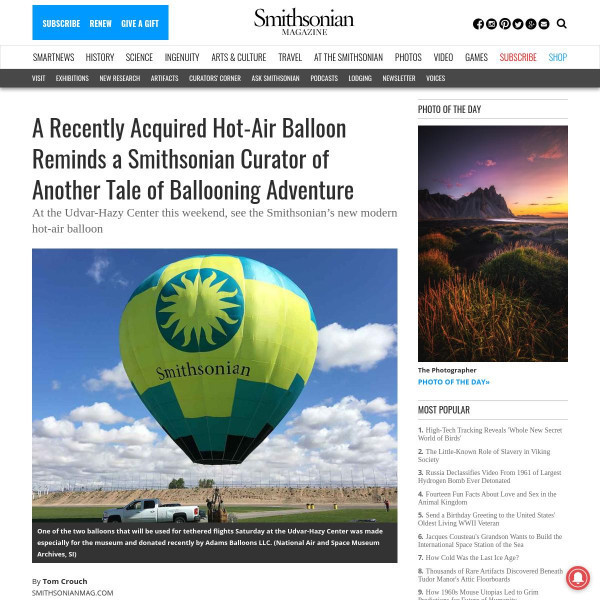