The Appalling and Beguiling History of Budapest's Margaret Island

Margaret Island is a 225-acre spit of silt that bubbled up eons ago on the Danube River in the middle of what is now Budapest, the Hungarian capital. Called Margit-sziget in Hungarian, it is named after Margit, the beautiful daughter of a 13th-century king. The island is shaped like an art nouveau teardrop, an emerald jewel set in a river bordered on either side by the bustling city. It’s a retreat like none other: A strange alchemy of geography and history has lent the place a mystical aura, attracting both devout Catholics and determined lovers.

Among the island’s century-old oaks and poplars are the ruins of a Dominican convent where the princess lived. Margit—known to the world as St. Margaret of Hungary—became a legend here, beloved and pitied. It was within the convent walls that she, as a teenager, defied her father’s order that she marry a neighboring king. Instead, she devoted herself to God and died an early death.

The pious come here to celebrate that deep devotion. Lovers have other motivations. They carve into tree trunks their initials encircled by a heart, or chalk their first names on what is left of the convent’s stone walls. The truly faithful among them believe that only God can plant love in the heart, so they beseech him to reaffirm their desires. Others come simply because the island is relatively quiet and secluded, close to downtown but far from prying eyes. That, anyway, is the reason my first love cited when she proposed we visit the island many decades ago.

Born in 1242, Margit was doomed to a life without romance. She was the favorite daughter of Hungary’s King Béla IV, from the House of Árpád, who lost his realm in battle—a territory the size of France. Pursued by relentless Mongol horsemen who sacked and burned much of Europe, Béla fled to a small island off the Dalmatian coast, now in modern-day Croatia. In hiding, Béla’s fortunes shifted: The sudden death in faraway Asia of Ögedei Khan, son of Genghis, prompted the retreat of Mongol forces from Europe.

Béla returned to his capital Buda (later joined with Pest) beaten and humiliated, anxious to rebuild his devastated kingdom. He had promised the Almighty that if he and his wife, Queen Maria, survived the Mongol attack, they would offer their next child to the church. Margit was just three or four years old when her parents entrusted her to the Dominican convent. But she was lovely to look at, and European royals expressed interest in marrying her. The king and queen saw strategic advantage in this—an opportunity to strengthen Hungary’s alliances.

That was not to be. At the age of seven, according to a biography by Lea Ráskai, a Dominican nun writing in the early 16th century, Margit refused to be engaged to a Polish duke, telling her parents that she would rather die than get married. By age 18, Margit had become a nun, but King Béla planned to ask the pope to annul her vows so Margit could marry King Ottokár II of Bohemia, who was smitten by her beauty. Again she refused.

Rejecting a life of royal luxury, Margit walked barefoot and insisted on being given the lowliest tasks. She scoured pots and pans, scrubbed rough stone floors, and cleaned latrines. The Voices of the Saints, a collection of biographies published by Loyola Press of Chicago, recounts Margit’s defiance of her father. “Stop trying to turn me from my determination to remain a nun,” Margit wrote to him. “I prefer the heavenly kingdom to that which has been offered me by the King of Bohemia. I would rather die than obey these commands of yours that will bring death to my soul.” She further threatened to cut off her nose and lips to make herself unacceptable to men.

According to her biography, Margit still punished herself with “extreme self-abnegation that some observers called self-crucifixion.” Margit’s fellow nuns testified that she also performed “marvelous” services to the sick. As many as 74 miracles were attributed to her, most of them referring to her role in curing illnesses, and one instance of bringing a person back from the dead. But she neglected personal hygiene and denied herself food and sleep for long periods. Her disregard for her health shortened her life.

Margit was just 28 when she passed away. Her parents were still so angered by her refusal to marry Ottokár that they did not attend her funeral.

According to church documents, the Hungarian people venerated Margit as a saint soon after her death. At least one church was built dedicated to her memory. Her brother, King Stephen V—who had fought a brutal civil war with their father Béla—requested her canonization, at least partly because it would have burnished Hungary’s status as a recently converted nation.

Yet several early attempts to canonize Margit failed, and the reasons remain something of a mystery. Ancient disagreements between the Dominican and Franciscan Orders might have hindered the process. According to Professor Kornél Szovák of the Pázmány Péter Catholic University of Budapest, “lack of confidence in female credibility as well as in mystical experiences” might also have played a role.

It was Pope Pius XII, an adroit politician partial to asceticism, who dusted off ancient documents and took up Margit’s cause again nearly seven centuries after her death. World War II was raging, and some speculate that the pope was looking for a favor to offer Hungary’s devout Roman Catholic prime minister, Miklós Kállay, who was secretly negotiating with the Americans to break with the Axis. The pope surprised Hungarians with Margit’s canonization on November 19, 1943, at a time when Axis powers were showing critical military weakness in the war.

Lovers are drawn to Margaret Island's 225 acres because parts of it are quiet and secluded—close to downtown but far from prying eyes. (Akos Stiller)

The House of Árpád was long gone by then. King Béla foresaw its demise. Described by historians as grim, ill-tempered, and often illogical, he blamed his ten children for undermining him. He was particularly troubled that his dynasty, the royal line that founded the Kingdom of Hungary in the ninth century, was running out of male heirs.

In 1301, three decades after Margit passed away, her cousin, Andrew III, died. He was the last of the Árpád kings. What followed was more upheaval. The Habsburgs, best known among the foreign-born rulers who claimed the Hungarian throne, had to contend with rebellions and conspiracies through four centuries.

In 1867, when the Austrian Emperor Franz Josef I and his Hungarian subjects finally made peace, the Viennese genius of light music Johann Strauss II composed “An der schönen, blauen Donau,” the seductive waltz popular the world over as “The Blue Danube.” It became the unofficial anthem of the newly renamed Austro-Hungarian Empire. Fifty years later, however, that multiethnic empire collapsed, replaced by several bickering nation states that came under pressure from Germany, another country sharing the Danube.

The banks of the river near Margaret Island became the site of unthinkable atrocity in the winter of 1944-45. It was in that frigid season that the Nazi Arrow Cross militia hunted down hundreds of Jews of all ages, including my sister Ibolya who was in her early 20s and had a newborn child. The militiamen lined them up by the Danube, and ordered them to step out of their shoes. Then they aimed their guns at the nape of their victims’ necks, so the bodies would fall into the river and be swept away with the ice floes.

In 2005 the artist Gyula Pauer memorialized the victims of the Nazi slaughter by sculpting 60 pairs of cast-iron shoes in the fashions of the 1940s. He cemented them to the stone slabs of the Danube embankment, a short walk from the sumptuous 19th-century edifice of the Hungarian Parliament. The same building houses the sacred crown of St. Stephen (István in Hungarian), a stunning masterpiece of medieval goldsmiths, given by Pope Sylvester II to the first Christian king of the House of Árpád.

"Shoes on the Promenade," a project conceived by Can Togay and created with artist Gyula Pauer, consists of 60 pairs of cast-iron shoes in the styles of the 1940s. The work honors the many Jews killed and thrown in the river by Nazi militiamen during World War II. (Akos Stiller)

Through much of Hungary’s tormented modern history, lovers and pilgrims visited the ruins of Margit’s convent. Among them was Hungary’s finest romantic writer, Gyula Krúdy. “Otherworldly” was how he characterized the river Danube. One evening in 1920 he reported seeing shooting stars “fleeing the vault of heaven” and crashing into the river, “leaving silver scratch marks on the waves before drowning.” He also wrote of how he searched in vain for the footprints of the unforgettable inamorata of his youth while strolling along the well-maintained gravel paths of the island.

So it was with this writer. My first love, a delicate woman of many moods, called herself Magnet. I suspect that she was born Margit but chose for herself a name no one else had in Hungary. Soon after we met in the spring of 1956, she suggested that we walk to Margaret Island. We held hands and found ourselves agreeing on favorite poems we had memorized. Our first kiss occurred on a bench facing the ruins of the cloister. A few months later she dumped me without explanation. I long ago lost interest in why she fell in love with someone else, whom she also cast off later that year, around the same time Soviet tanks crushed the Hungarian Revolution.

Everyone I know in Budapest cherishes memories of visiting Margaret Island. A friend in her late 80s recently surprised me by confiding a secret she kept from her husband and their numerous children and grandchildren: She learned about love in the lush greenery of the island, only a short walk from the madding crowds of downtown Budapest. “I was only 19,” she confessed to me. “I was, and I am, a churchgoing Roman Catholic, and I was overjoyed when my parochial school celebrated for three days her beatification in 1943. But I did not think of St. Margaret while enjoying what her beautiful island offered. Actually, my first lover and I soon broke off, which was a good thing. I found out that the handsome fellow was already married.”

My hero Krúdy wrote about his tearful loneliness when retracing his first amorous adventure on the island. He found himself drawn to the snake tree, so named because it turned and twisted in a serpentine way. To Krúdy, the tree was “teaching a lesson to lovers that love leads to heartaches.” He theorized that the tree in its long-ago youth might have been in love with a tall willow or an elegant spruce and in its disappointment its branches suffered “epileptic spasms.”

Krúdy declared his love for St. Margaret as a tragic victim of Christian asceticism. He also mourned the extinction of the House of Árpád. His writings celebrated most of the 21 kings who made up that only native Hungarian dynasty. To him, their reign was the closest Hungary ever came to a golden age. 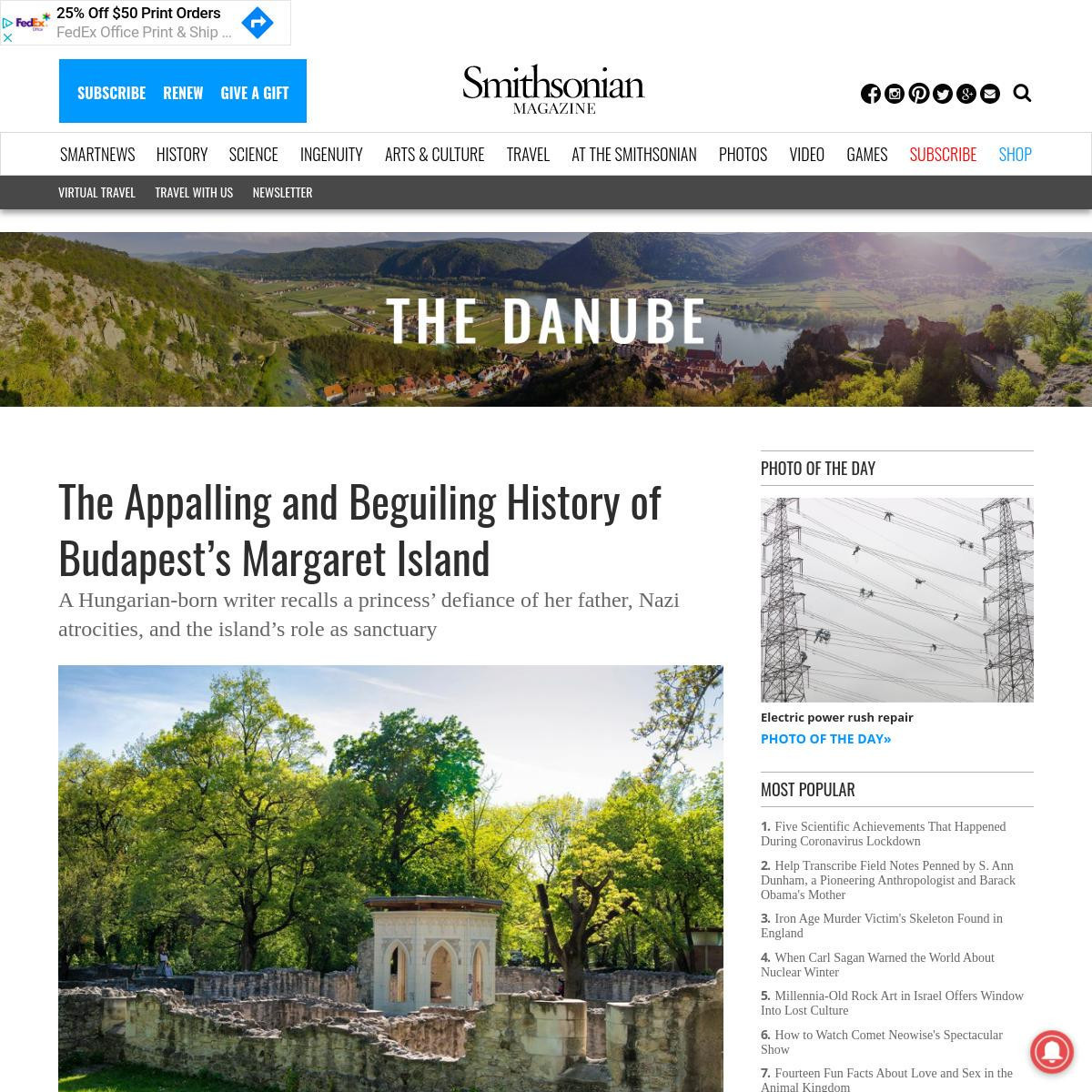