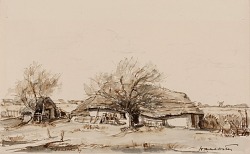 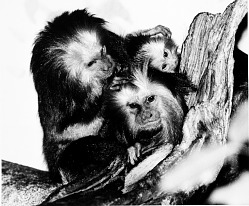 The first baby golden-headed lion tamarin ever born in captivity in North America was born at the National Zoological Park in August of 1986. Shown here is the father tamarin grooming the mother, who is carrying the baby on her back. They are in the Small Mammal House.

The Amazing Adaptation That Keeps Tamarin Numbers Up

Smithsonian Channel
Golden lion tamarins have evolved a clever way to keep their population size steady in the face of predation. They almost always give birth to twins. From the Series: Amazing Monkeys: The Americas http://bit.ly/2y7TQ5Y 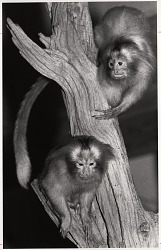 Captive-born golden lion tamarins are being introduced to their natural habitat in Brazil thanks to efforts of researchers at the National Zoo. As part of a program to prevent their extinction, fifteen were sent on their way early in November. Zoo biologist Devra Kleiman is sitting second from right.

This Alpha Female Tamarin Has Taken a Dislike to an Outsider

Smithsonian Channel
A female cotton-top tamarin runs into a small troop and attempts to join their ranks. But the alpha female of that group isn’t welcoming – a new female could threaten her breeding position. From the Series: Into the Wild Colombia: Finding a Family http://bit.ly/2WKwQqJ

The behavior and conservation of the golden lion tamarin, Leontopithecus r. rosalia

National Zoo
Emperor tamarins live in the forests of the Amazon Basin. They spend most of their time in trees, navigating from branch to branch foraging for insects, fruit and leaves. Fully grown, they only weigh about one pound. The tiny monkeys live in extended family groups, which helps prepare young monkeys for parenthood. Come see Fleck and Poe at Amazonia! #MonkeyMustaches #EmperorTamarin #WeSaveSpecies

Ex situ diseases and their control for reintroduction of the endangered lion tamarin species (Leontopithecus spp.)

A peak in sexual activity during mid-pregnancy in the golden lion tamarin, Leontopithecus rosalia (Primates: Callitrichidae) Smithsonian Field Book Project
The notes document M. Moynihan's observations of Saguinus (Tamarin monkeys) and indexes, 1959, 1964-1967. Pages are numbered. Indexes are organized by behaviors observed (of adults of the species unless otherwise stated) with page numbers. Entries are headed with date, location, and type. Notes are broken into 11 sections. Observations describe behavior, appearance, and calls of individual and groups of primates, captive and wild. Captive primates are at Barro Colorado. Observations in the wild include time of day, location of primates in the vegetation, weather, sex, and age. Includes illustrations of primates augmenting text, and notations indicated by pattern. Locations include Barro Colorado Island, Forest Reserve, Ancon Hill, Gamboa Highway, Panama.

Genetic variation within and among lion tamarins 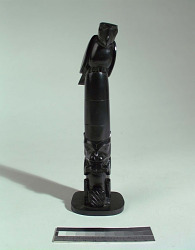 On Friday, June 29, the Smithsonian’s National Zoo celebrated the birth of two golden lion tamarins to first-time parents Mo and Izzy. While infant mortality rates are high among golden lion tamarins, with 50 percent dying during the first year of life, both infants and their new mother appear “healthy and strong,” says Zoo curator Steven Sarro. The birth of the tamarins was the first for the Zoo in a decade.

Golden lion tamarins remain endangered in their native home of Brazil. In coastal forests, their numbers dipped to as few as 200 in the early 1970s due to continued habitat destruction. Thanks to conservation efforts championed in part by the National Zoo, breeders and zoologists around the world have redoubled efforts to preserve the species through the Golden Lion Tamarin Conservation Program.

Today, about 3,200 golden lion tamarins live in the wild, with an additional 500 cared for and studied in zoos around the world. About a third of free-living tamarins are descendants of relatives raised under the care of humans; however, due to the fragile state of the tamarins’ South American habitats, no tamarins are currently being released beyond zoo walls.

Zoo curators entered the tamarin habitat Friday morning to a happy surprise: two newborn infants clinging to mother Izzy’s backside. Izzy had been suspected to be pregnant for weeks due to recent weight gain. Tamarins typically breed between September and March, gestating for about four and a half months, and twin births are typical.

Golden lion tamarins are highly social, living in family groups of two to eight, typically with only one active breeding pair. After the first few days with their mother, newborn tamarins will spend most of their infancy in the care of their father, who ferries them on his back. While mothers take the infants to nurse, they ultimately return to them to the sire’s side.

Zoo curators have already observed the twins latch onto to Mo’s back. At about five weeks of age, the newborns are expected to begin exploring their new environment, weaning off their mother’s milk around three months. The family will remain as a unit as the new tamarins reach maturity. At 11 and five years old respectively, Mo and Izzy are monogamous and maintain “a strong pair bond,” says Sarro. They are expected to produce at least one or two more litters according to breeding recommendations from the Golden Lion Tamarin Species Survival Plan. Tamarins in captivity usually live to the age of 15.

“It’s been 10 years since we’ve had baby tamarins here,” Sarro says. “It’s an endangered species that the Smithsonian has been working on for years. It’s a real feather in our cap.”

Recovery and management committees for lion tamarins: Partnerships in conservation planning and implementation