SI Center for Learning and Digital Access
This website is devoted to strategies for improving ocean fitness and health. Learn about ongoing efforts involving marine sanctuaries, bioacoustics, and algae blooms. Learn, too, about what you can do to help.

Smithsonian Education
Compare and Contrast is a strategy to help students analyze similarities and differences. Applied to museum exhibitions and resources, comparisons can be made between distinctly different or closely related primary sources; between familiar and unfamiliar sources; or between concrete examples and abstract concepts. Another approach is to look at one thing from the perspectives of different disciplines. From Smithsonian Source, Teaching with Primary Sources website. 2005.

An evolutionary basis for conservation strategies 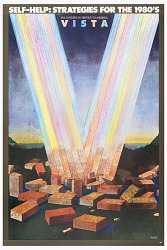 Smithsonian Libraries
In an interval of just 1-2 decades, the nature of tropical forest destruction has changed. Rather than being dominated by rural farmers, tropical deforestation now is substantially driven by major industries and economic globalization, with timber operations, oil and gas development, large-scale farming and exotic-tree plantations being the most frequent causes of forest loss. Although instigating serious challenges, such changes are also creating important new opportunities for forest conservation. Here we argue that, by increasingly targeting strategic corporations and trade groups with publicpressure campaigns, conservation interests could have a much stronger influence on the fate of tropical forests.

Smithsonian Education
Graphic Organizers, such as charts, tables, and concept maps, are tools that help students find key ideas and relationships among ideas. They are particularly effective in a museum setting. As an alternative to the often-used field trip scavenger hunt, developing a graphic organizer for a museum exhibition focuses students on answering historical questions posed by an exhibition rather than simply locating objects and reading labels. Moreover, a museum graphic organizer encourages students to identify themes, note connections, and link specific observations to larger concepts. Graphic organizers can be used for any age group and learning level. Based on your goals for the lesson, simplify the graphic organizer or increase its complexity to allow for sub-themes and supporting details. For students learning English, add visual aids and translation exercises. From Smithsonian Source, Teaching with Primary Sources website. 2005.

SI Center for Learning and Digital Access
Several activities designed to introduce the principles of archeology, the importance of material culture, and techniques and questions of archeology. Also includes suggested speakers in the Washington, DC area.

How more than 1,000 tree species may occur in a small area of forest in Amazonia or Borneo is an unsolved mystery. Their ability to […]

Managerial Strategies in the Captive Propagation of Endangered Species

How JFK's Clever TV Strategies Helped Him Win the Election

Smithsonian Channel
Seventy million people tuned in to watch America's first televised presidential debate in 1960. They were met with a well-prepared, well-dressed JFK who outshone his opponent, Richard Nixon. From the Series: America In Color: The 1960s http://bit.ly/1960sinColor

Relative Brain Size and Feeding Strategies in the Chiroptera

The evolution of plant functional variation: traits, spectra, and strategies

Smithsonian Tropical Research Institute
Fiddler crabs and many other marine organisms have strong cycles of courtship and larval hatching that are linked with the tidal amplitude cycle. Kecia Kerr studies fiddler crabs to determine how intertidal organisms maintain precisely timed larval hatching across large temperature changes. This video shows footage of courting males from 2 different species of fiddler crabs found in Panama, Uca terpsichores and U. deichmanni. Video and text by: Kecia Kerr Edited by: Rebecca Rissanen Collin Lab Smithsonian Tropical Research Institute, Panama, 2011 Research in the Collin Lab focuses on the evolution of life histories and development of marine invertebrates. Our current work, supported by the US National Science Foundation, uses marine slipper limpets (Calyptraeidae) to try to understand the evolutionary loss and possible reacquisition of feeding larvae. The Collin Lab is located in Panama City, Panama, at the Smithsonian Tropical Research Institute's Naos Marine Laboratories, but our field work takes us to various other countries in the Americas. We hope that the videos on this YouTube channel give you an introduction to the faces in the Collin Lab, as well as a taste of the kinds of projects we are working on.

Cliquey Adriatic Dolphins May Have Strategies for Avoiding Each Other

Dolphins are highly social creatures, known for forming complex and long-lasting relationships with one another—and, sometimes, with other species. But dolphins can be quite choosy when it comes to picking their buddies. As the New Scientist reports, a study of bottlenose dolphins in the northern Adriatic has found that the animals not only form distinct friend groups, but also shun members of rival “cliques.”

It is often said that dolphins are “fission-fusion” species, meaning that they merge and split in a malleable social structure. But according to the authors of the study, published recently in the journal Marine Biology, dolphin societies can vary greatly from population to population. Dolphins in Florida, for instance, seem to segregate based on sex and age. Among the dolphins of Doubtful Sound, New Zealand, strong bonds form between the sexes. And based on nine years of observations, the researchers behind the new study conclude that dolphins that frolic in the Adriatic’s Gulf of Trieste, near the coast of Slovenia, have quite stable social structures.

Dolphins in this region have divided into two main groups, comprised of both males and females that form long-lasting social bonds. The distinct clusters have “core” members, with other dolphins in the group forming social “tiers,” as the researchers put it. There was also a third, smaller cluster of dolphins, which had “no particularly strong bonds with anyone,” the study authors write. These lonely dolphins seemed to act as “social brokers” between the two main groups, preventing them from becoming completely isolated from one another. But the main groups seldom interacted; Tilen Genov, a marine biologist with the Morigenos-Slovenian Mammal Society, tells Atlas Obscura’s Anna Kusmer that the groups have only been observed together four times over the past 16 years.

In their efforts to avoid one another, the clusters seem to have come up with a system for sharing desirable parts of the sea. One group predominantly fed in the core study area in the morning hours, while the other would appear in the evening. Similar patterns of segregation have been seen among bottlenose dolphins in Scotland, where different groups take turns occupying an inlet called Moray Firth. But in that case, the exchange seems to be seasonal, with the swap occurring in the summer. The Adriatic dolphins were sharing their favorite patch of sea every day.

“We were quite surprised by this,” Genov says. “It is not uncommon for dolphins to segregate into different parts of the sea, but to have certain times of the day in which they gather is unusual.”

It is not clear why the Adriatic dolphins avoid feeding together. It is possible that they are trying to avoid aggressive interactions between the groups, or perhaps they simply have varied foraging preferences. Genov and his colleagues did observe that the clusters interacted differently with fishing trawlers: One group trailed after the boats to scoop up loose fish, and the other did not.

“[N]ot all population segments necessarily respond to, or interact with, human activities the same way, or at the same time,” the study authors point out. It is therefore important for scientists to understand the intricacies of dolphin societies—like how they splinter off into different groups with distinct hunting strategies—so they can better plan to conserve and manage the animals. 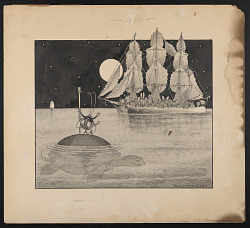 Archives of American Art
1 cartoon (humorous image) : ink ; 49 x 54 cm. Large scale illustration of a bug riding a turtle, shouting at a ship made of a log and leaves, ridden by other bugs, in the distance. Image may be commentary on World War I. Illustration likely created by Harrison Cady to be published as a comic in Life magazine.
Inscription (handwritten): 4 1/4
Inscription (stamped) on verso: Appeared in No. 1747 Dated 4/20/16
Inscription (typescript) on attachment on verso: Cady Feb 25, 1917; Teuton strategy; German Bug: Lay to or I'll send you to the bottom wit all aboard 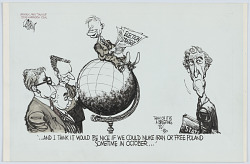 In a series of ongoing experiments on Barro Colorado Island in the Panama Canal, Kays and other researchers are using camera traps, radio collars and palm nuts with tracking transmitters attached to them to take a closer look at the nut-hoarding strategies of the agouti.