Campaign speeches are useful, at that

National Museum of American History
This pen-and-ink comic art drawing by Rube Goldberg from 1924 features the concept of using “windy” political speeches as free energy. Rube Goldberg (1883-1970) was an engineer before he was a comic artist. After receiving an engineering degree, he started his career designing sewers for the City of San Francisco, but then followed his other interest and took a job as a sports cartoonist for the San Francisco Chronicle. After moving to New York in 1907 Goldberg worked for several newspapers, producing a number of short-lived strips and panels—many of which were inspired by his engineering background, including his renowned invention cartoons. In the late 1930s and 1940s he switched his focus to editorial and political cartoons and in 1945 founded the National Cartoonists Society. The Reuben, comic art’s most prestigious award, is named after him. 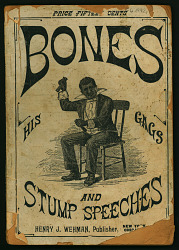 Bones, His Gags and Stump Speeches National Museum of African American History and Culture
A pamphlet featuring the 1936 candidates for the Communist Party. The cover has black print on yellowed paper. At center, there are two black and white photographs - one of Earl Browder, the other of James W. Ford. The interior consists of fifteen pages of text of speeches delivered by Browder and Ford. The back cover has an advertisement for Workers Library Publishers. 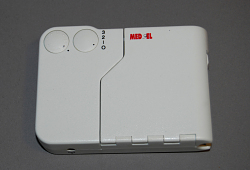 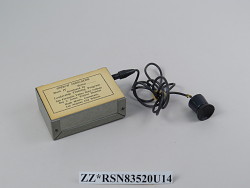 National Museum of African American History and Culture
Hardback book with black and bronze-colored print on a blue cover. At bottom left is a black-and-white photograph of Audre Lorde.

SI Center for Learning and Digital Access
Webpage documents Barbara Dane and Irwin Silber's mission to promote social and political activism through Paredon Records. Listen to music and spoken-word recordings as you learn about the role of music in political activism in the latter half of the twentieth century. 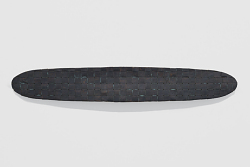 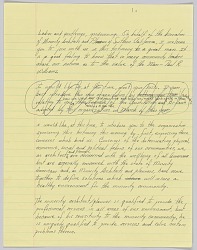 National Museum of African American History and Culture
Handwritten notes for a speech from Harold Williams. The notes are written in black ink on yellow legal paper. There are five (5) pages with the reverse blank. The speech honoring Paul R. Williams begins [Ladies and gentlemen, good evening. On behalf of the Association of Minority Architects and Planners of Southern California, I welcome you to join with us in this testimony to a great man.] The speech discusses the goals of the organization and the establishment of the Paul R. Williams Minority Scholarship Fund at the University of Southern California. 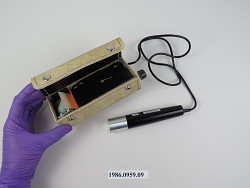 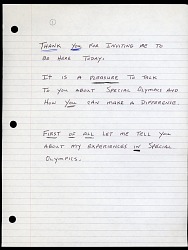 Marty Sheets was born with Downs Syndrome in 1958 but through Camp Joy, a camp for kids with intellectual disabilities, he found a love of sports. Invited to participate in the first International Special Olympic Games in Chicago in 1968, Marty formed a life long bond with founder Eunice Kennedy Shriver. Over the course of the next 40 years Sheets won over 250 medals while competing in golf, swimming, Alpine skiing, tennis and power lifting. His favorite sport was golf and In 2006, he was the PGA’s national volunteer of the year for his work at the Wyndham Championship in his hometown of Greensboro, N.C. He is also included in the portrait of Eunice Kennedy Shriver and other Special Olympians which now resides in the National Portrait Gallery collections.

From its beginnings as Camp Shriver in Eunice Kennedy Shriver’s backyard, to the first international games in 1968, Special Olympics has been about giving people with intellectual disabilities the opportunity to participate in sport. This participation builds confidence, provides emotional support and offers social opportunities for the athletes and their families. With state chapters and a global presence through its World Games, “Special Olympics is the largest sports organization for people with intellectual disabilities with 5 million athletes in 170 countries worldwide.”

It’s one thing to read a speech long after it was spoken, when all of the kinks have been smoothed and every word has been lassoed into order. It’s a whole different matter to read a speech in an early draft, complete with cross-outs, substitutions and the stains from the desk where it lay.

The King Center’s digital archives offer anyone on the Internet just that kind of close contact with one of history’s greatest speakers. Begun in 2011 and sponsored by JPMorgan Chase's Technology for Social Good, the project has organized and digitally preserved over 1 million documents from Dr. Martin Luther King Jr.’s life, with more added each day.

Of the vast collection of documents available, some of the most illuminating are speech drafts, marked up by editing—often in King's own hand, but also by others, likely secretaries or other staff—demonstrating the creative and philosophical process behind their composition.

Take, for example, a draft of “The Christian Way of Life in Human Relations,” a speech he made on December 4, 1957, when addressing the National Council of Churches on race relations. There’s evidence of word-choice revisions—for example, subbing in “distorts” for “degrades.” But there are also dozens of lines scratched out with a pencil, showing how Dr. King reconsidered, in one instance, a section describing the efforts of the Klu Klux Klan. The draft suggests he ultimately chose to only give the group a mere sentence.

There’s something deeply intimate about browsing through the King Center’s Archive. And there is so much more there than speeches—you’ll find letters, articles, sermons, photos, pamphlets and telegrams, too. There are also dozens of notecards filled with the civil rights leader’s own handwriting, remnants of his education at Morehouse College and Boston University.

All together, the collection can absorb you in the world of Dr. King’s personal history, as well as his global contributions to everything from Vietnam and the integration of schools to economics and philosophies of nonviolence—which might just be one of the best ways to spend part of the long holiday weekend.

In His Speeches, MLK Carefully Evoked the Poetry of Langston Hughes

For years, Martin Luther King Jr. and poet Langston Hughes maintained a friendship, exchanging letters and favors and even traveling to Nigeria together in 1960.

In 1956, King recited Hughes’ poem “Mother to Son” from the pulpit to honor his wife Coretta, who was celebrating her first Mother’s Day. That same year, Hughes wrote a poem about Dr. King and the bus boycott titled “Brotherly Love.” At the time, Hughes was much more famous than King, who was honored to have become a subject for the poet.

But during the most turbulent years of the civil rights movement, Dr. King never publicly uttered the poet’s name. Nor did the reverend overtly invoke the poet’s words.

You would think that King would be eager to do so; Hughes was one of the Harlem Renaissance’s leading poets, a master with words whose verses inspired millions of readers across the globe.

However, Hughes was also suspected of being a communist sympathizer. In March of 1953, he was even called to testify before Joseph McCarthy during the Red Scare.

It forced King to distance his organization from men with similar reputations – Bayard Rustin, Jack O’Dell and even his closest adviser, Stanley Levison.

It also meant he needed to sever any overt ties to Hughes.

But my research has found traces of Hughes’ poetry in King’s speeches and sermons. While King might not have been able to invoke Hughes’ name, he was nonetheless able to ensure that Hughes’ words would be broadcast to millions of Americans.

Beating back the red-baiters

In the 1930s, Hughes earned a subversive reputation by writing several radical poems. In them, he criticized capitalism, called for worker’s to rise up in revolution and claimed racism was virtually absent in communist countries such as the U.S.S.R.

By 1940, he had attracted the attention of the FBI. Agents would sneak into his readings, and J. Edgar Hoover derided Hughes’ poem “Goodbye Christ” in circulars he sent out in 1947.

Red-baiting also fractured black political and social organizations. For example, Bayard Rustin was forced to resign from the SCLC after African-American Congressman Adam Clayton Powell threatened to expose Rustin’s homosexuality and his past association with the Communist Party USA.

As the leading figure in the civil rights movement, King had to toe a delicate line. Because he needed to retain popular support – as well as be able to work with the Kennedy and Johnson administrations – there could be no question about where he stood on the issue of communism.

So King needed to be shrewd about invoking Hughes’ poetry. Nonetheless, I’ve identified traces of no fewer than seven of Langston Hughes’ poems in King’s speeches and sermons.

In 1959, the play “A Raisin in the Sun” premiered to rave reviews and huge audiences. Its title was inspired by Hughes’ poem “Harlem.”

“What happens to a dream deferred?” Hughes writes. “Does it dry up like a raisin in the sun? … Or does it explode?”

Just three weeks after the premiere of “A Raisin in the Sun,” King delivered one of his most personal sermons, giving it a title – “Shattered Dreams” – that echoed Hughes’ imagery.

“Is there any one of us,” King booms in the sermon, “who has not faced the agony of blasted hopes and shattered dreams?”

He’d more directly evoke Hughes in a later speech, in which he would say, “I am personally the victim of deferred dreams.”

Hughes’ words would also become a rallying cry during the Montgomery Bus Boycott.

During the grind of the year-long boycott, King spurred activists on by pulling from “Mother to Son.”

“Life for none of us has been a crystal stair,” King proclaimed at the Holt Street Baptist Church, “but we must keep moving.” (“Well, son, I’ll tell you / Life for me ain’t been no crystal stair,” Hughes wrote. “But all the time / I’se been a-climbin’ on.”)

Did Hughes inspire the dream?

King’s best-known speech is “I Have a Dream,” which he delivered during the 1963 March on Washington.

Nine months before the famous march, King gave the earliest known delivery of the “I Have a Dream” speech in Rocky Mount, North Carolina. (We can also now finally hear this connection after the reel-to-reel tape of King’s First Dream was recently discovered.)

But the roots of “I Have a Dream” go back even further. On Aug. 11, 1956, King delivered a speech titled “The Birth of a New Age.” Many King scholars consider this address – which talked about King’s vision for a new world – the thematic precursor to his “I Have a Dream” speech.

In this speech, I recognized what others had missed: King had subtly ended his speech by rewriting Langston Hughes’ “I Dream a World.”

A world I dream where black or white,

Whatever race you be,

And every man is free.

It is impossible not to notice the parallels in what would become “I Have a Dream”: I have a dream that one day … little black boys and black girls will be able to join hands with little white boys and white girls and walk together as sisters and brothers.

King spoke truth to power, and part of that strategy involved riffing or sampling Hughes’ words. By channeling Hughes’ voice, he was able to elevate the subversive words of a poet that the powerful thought they had silenced.

Smithsonian Channel
"I've seen the Promised Land," Martin Luther King Jr. said in a speech in Memphis on April 3, 1968. He was assassinated the following day. From: MLK: THE ASSASSINATION TAPES http://bit.ly/1nvQpfC 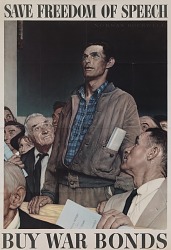 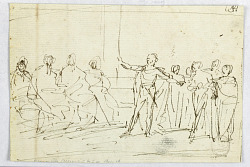 The speech of monkeys, by R.L. Garner .. 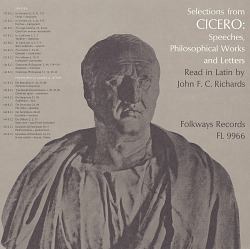 Text of selections in Latin and English in booklet (12 p.) inserted in original container. 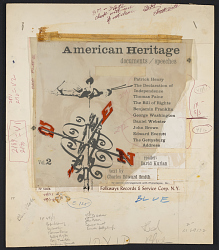