SI Center for Learning and Digital Access
Video and activity guide taking students on a special trip to the United States Naval Observatory to learn about one of the observatory's telescopes, the history of telescopes, and the work done at the observatory. Part of the resource, 'Exploring the Sky.'

Mountain observatories in America and Europe

Emmett Duffy, currently the Gluckman Professor of Marine Science at the College of William & Mary in Virginia, has been appointed director of the Smithsonian’s […]

The founding charter of the Genomic Observatories Network 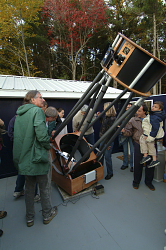 A call for an international network of genomic observatories (GOs) 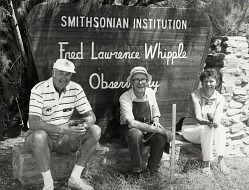 In Arizona, Fred Lawrence Whipple Observatory volunteers pose with symbols of their expertise. From left to right, John Kuntz grips a sledge hammer, Bob McDaniel steadies a vernier height gauge, and Shirley Spanner holds a rescued rainbow cactus. John Kuntz, a tour guide for the Observatory, has added the task of road-marker to his repertoire. Kuntz marked a 10-mile stretch of the road from the new Base Camp to the top of the mountain at 100 foot intervals for future road contractors. Bob McDaniel, a former machinist, has fashioned arcane bits and pieces of hardware for Whipple telescopes. Shirley Spanner, at the site of the Observatory's new Base Camp in the foothills of the Santa Rita Mountains, rescued a number of uncommon cactuses from the bulldozer's blade. 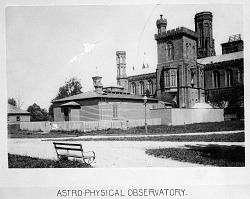 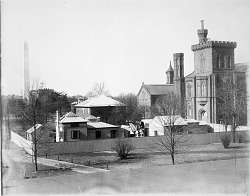 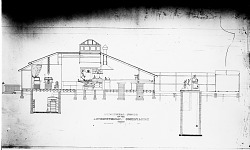 Plan of the Astrophysical Observatory 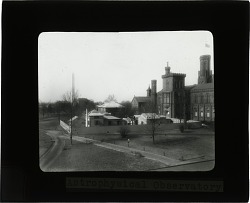 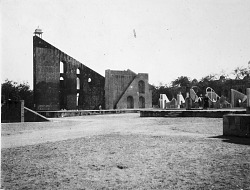 Smithsonian Archives - History Div
There are many photos of this area taken by Abbot in SIA RU7005 B187 F8. 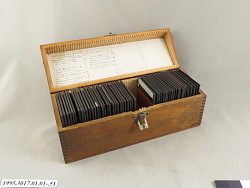 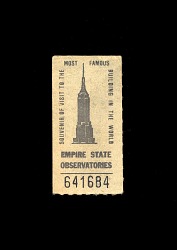 Souvenir of Visit to the Most Famous Building in the World: Empire State Observatories

Photobombs at the Observatory?!

National Air and Space Museum
It was just another day at the National Air and Space Museum’s Public Observatory… The Sun was shining, birds were chirping, and we ended up seeing both! This incredible footage was caught purely by accident as Smithsonian staff tried to image the Sun. The imaging process begins with a video capture of the Sun using   ...Continue Reading 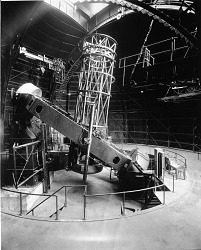 This photo is featured in the Smithsonian Annual Report for 1932, opposite page 141.

The Great Hooker 100-inch telescope used at the Mt. Wilson, California Observatory, which served as a Smithsonian Astrophysical Observatory station from 1905 to the mid 1930's. 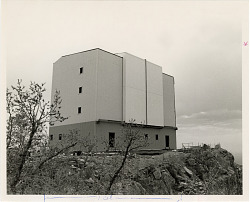 Caption from Torch: "The MMT facility high atop Mt. Hopkins now sports a new outer skin of metal siding, with the last portion of the installation completed by Smithsonian personnel in June. During May, the concrete floors of the building were poured. The next major milestone in construction of the joint SAO-University of Arizona project will be installation of the optical support system this summer. The MMT concept is apparently becoming the wave of the future in large telescope design. In April, the Kitt Peak National Observatory announced that work had begun on studies for a 25-meter (1,000-inch) version of the pioneering Smithsonian-Arizona telescope." 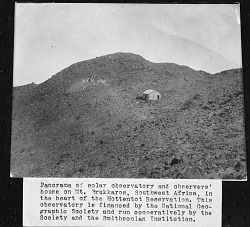 Smithsonian Archives - History Div
There are many other pictures of Mt. Brukkaros in 7005/168/7

In 1971, at the height of the Cold War, renowned U.S. and Soviet scientists gathered at Armenia's Byurakan Astrophysical Observatory (BAO) to ponder what contact with alien life would mean for humankind and how communication would be possible. “Communication with Extraterrestrial Intelligence (CETI),” as the symposium was called, was the first international scientific conference of its kind. 46 years later, at the exact same spot, six artists—a poet, sculptor, photographer, architect, installation artist and sound artist—came together for a residency and site-specific exhibition to pay homage to this historic gathering and to explore the theme of communication with extraterrestrial lifeforms through art.

This new pop-up exhibition, called CETI Lab: HAYP at BAO, lasted for 10 days last September and featured music, interactive installations (including the creation of hand-crafted “alien tracking devices”) and a space-inspired al fresco dinner. Berlin-based Lvis Mejia turned a large, inactive parabolic dish in nearby Orgov into an interactive sound installation that generated audio feedback from the massive neighboring gorge. “The dish looked post-Apocalyptic, like something out of a Kubrick movie,” says Anna Gargarian, co-founder of HAYP Pop-Up Gallery, who put together the exhibit. “Local shepherds were telling us they could hear it reverberating at the other end of the gorge. They were amazed.”

CETI Lab was a huge success, attracting approximately 700 visitors to the slopes of Mount Aragats, but the event was just one in a series of exciting new temporary exhibitions organized by HAYP Pop Up Gallery around Armenia. Gargarian and her cousin Charlotte Poulain founded the NGO as an experimental project in 2014 to draw attention to Armenia’s contemporary art scene. (The “hay” in HAYP is the local word for Armenians, and “P” stands for “pop-up.” The name also plays on the word “hype,” with the gallery's slogan being “Check Out the Hayp.”)

Gargarian and Poulain looked to match the country’s emerging artists with unused spaces, using online crowdsourcing to find buildings, ranging from vacant storefronts to deserted factories, that could be converted into pop-up galleries. HAYP hosted its first show in December 2014 in a then-empty floor of what is now one of Yerevan's elite business centers. Hosting various art installations, an improvisational instrumental duo and even an onsite film screening, they completely transformed the space into a short-lived modern gallery.

From there, HAYP's pop-ups flourished: a solo art show in the back room of an electronic cigarette shop (complete with e-cigarette flavor tastings that coincided with the exhibit), the takeover of an abandoned home and a mobile exhibition aboard a series of Soviet-made multi-stop trains running between Yerevan and Gyumri, Armenia's second largest city. “The [trains’] ticket controllers were almost becoming our ambassadors,” Gargarian said. “They'd explain to curious passengers what was happening: why two women were dancing together in one car while there was opera in another. It spurred a totally different type of conversation between the controllers and the passengers, many who ride the same route day in and day out.”

In Motion, a series of pop-up art displays on the train between Yerevan and Gyumri. (HAYP Pop-Up Gallery)

The key to keeping audiences engaged in the shows, Gargarian says, is to include variety – and to keep them short. Pop-ups typically run between four and 10 days, the latter being the perfect span, says Gargarian, because it's enough time to get the word out, but "not too long that people think they have a ton of time, and then miss it.”

While HAYP's rule of thumb is that it never exhibits in the same space twice, BAO may be an exception. The pop-up is already planning a large-scale partnership with the observatory for its 50th anniversary in 2021. This fall, in addition to a series of smaller pop-ups, HAYP is also joining forces with U.S.-based audio festival MEGAPOLIS to put on a sound/art pop-up in the northern Armenia town of Dilijan, featuring sound artists from Armenia, Iran, Europe and the U.S. This 10-day festival-style exhibition will highlight Dilijan's own historic musical ties, as well as its more recent experimental art initiatives.

In the three-plus years since HAYP's inception, Armenia's local art scene has grown exponentially. The Armenian Art Foundation—an independent non-profit that works directly with a diverse array of contemporary artists—launched in 2016, and Standart: Triennial of Contemporary Arts, an Armenian-based triennial international contemporary art exhibition, held its first event in July 2017. In 2016, the Nerka Design Pavilion, a pop-up dedicated to Armenia's emerging design scene, became the first Yerevan pop-up outside of HAYP, with UP Design Pavilion succeeding it the following year. Gargarian says she's happy to see the progress, since one of HAYP's goals was to inspire other similar spaces.

“Armenia is an exciting place to be right now, in terms of both art and in general” says Gargarian, “and being on the margins of Armenia's newly emerging art scene [as we are], without a fixed space, is actually quite powerful. We are not tied down to a specific location and its architectural, financial, audience and other restrictions, allowing us a more flexible format. We can be the connector between people, places and ideas.” 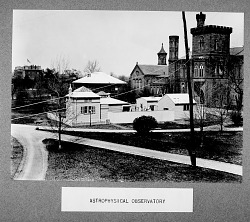 Smithsonian Archives - History Div
Buildings in the South Yard behind the Smithsonian Institution Building, include a building located on the southeast section built for use by the Smithsonian Astrophysical Observatory, established on March 1, 1890. The United States Department of Agriculture Building is in the background.

Hopes are high for Comet ISON, which has the potential to become the most spectacular comet seen in years. ISON is speeding through the inner […] 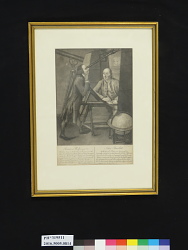 National Museum of American History
This mezzotint published in 1778 celebrates two men from modest circumstances who, through innate talent and rare opportunity, achieved respectability as observers in one of the best-equipped astronomical observatories in England. In this image, Thomas Phelps leans on an adjustable observing chair and looks through the 5-foot-long transit telescope made by Jonathan Sisson. John Bartlett sits nearby with pen and paper in hand, ready to record the time that Phelps reports a star or planet crossing the meridian. The astronomical regulator in the background was made by George Graham. The telescope at left, on a wooden tripod with an alt-azimuth mount, is probably a 3.5-foot-long refractor made by John Dollond. On the floor, at bottom right, is a large celestial globe. The text at bottom left reads: “Thomas Phelps, aged 82. Who from being a Stable Boy in the year 1718, to the then Lord Chief Justice Parker; afterwards Earl of Macclesfield, rose by his Merit to the upper Employments in that Family, and at last for his uncommon Genius, was promoted to be Observer, in their Observatory at Sherburn Castle. He was born at Chalgrove in Oxfordshire, January 1694.” The text at bottom right reads: “John Bartlett. At the time his Picture was drawn, aged 54. Originally a shepherd in which station, he, by Books & Observations, acquired such a Knowledge in Computation, and of the Heavenly Bodies, as induced the late George Earl of Macclesfield to appoint him Assistant Observer, in his Observatory at Sherburn Castle. He was born at Stoke Talmage in Oxfordshire, August 22d 1721 O.S.” The signatures read “James Watson fecit” and “Printed & Published March 14th 1778 by Jas Bretherton No 134 New Bond Street.” James Watson (about 1739-1790) was born in Ireland and became a prolific mezzotint engraver in London. Since no artist is here identified-as was the case with most of Watson’s prints-we assume that Watson created this image. James Bretherton (ca. 1730-1806) was an accomplished printer in London. George Parker, the 2nd Earl of Macclesfield, built his observatory at the 12th-century Shirburn Castle in Oxfordshire in 1739. His son, Thomas Parker, the 3rd Earl of Macclesfield, maintained the observatory until the 1790s, and may have been involved in the production of this print. Ref: Thomas Hornsby, “An Account of the Observations of the Transit of Venus and of the Eclipse of the Sun, Made at Shirburn Castle and at Oxford,” Philosophical Transactions of the Royal Society of London 59 (1769): 172-182.
1-24 of 3,218 Resources