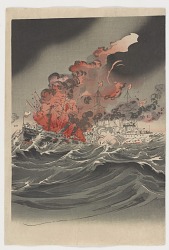 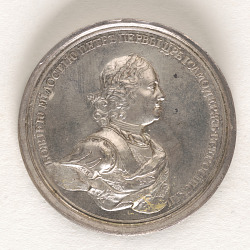 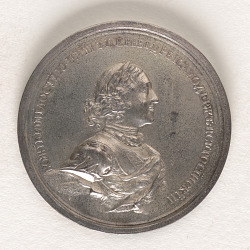 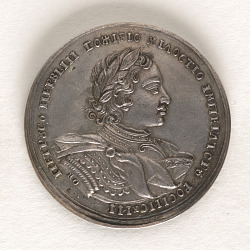 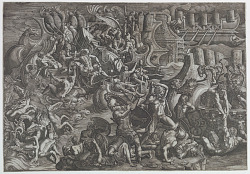 Naval Battle Between Greeks and Trojans

Smithsonian Channel
On May 31, 1916, a small skirmish between British and German warships would pave the way for the biggest naval confrontation of WWI--the infamous Battle of Jutland. From: BATTLE AT SEA: JUTLAND http://bit.ly/2nItqXx

Smithsonian Magazine
On May 31, 1916, a small skirmish between British and German warships would pave the way for the biggest naval confrontation of WWI 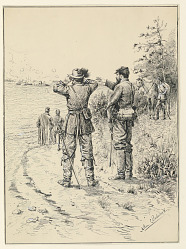 Cooper Hewitt, Smithsonian Design Museum
A general and an officer, both wearing swords, are watching a naval battle. Behind them is a screen of bushes and another soldier with a saddled horse.

The righteous war to chastize Russia, naval battle at Chemulpo

Naval Battle of the Russo-Japanese War at Chinmulpo, 9 February 1904 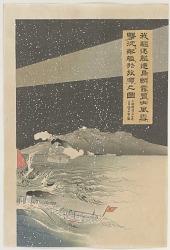 The Naval Battle At Port Arthur On The Snowy Morning Of February, 1904 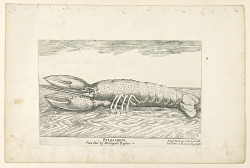 From a Series of Naval Battles for Wedding Festivities of Cosimo Il de'Medici, Ship of Periclymenus 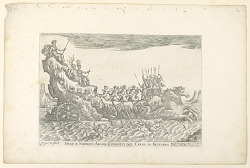 From a Series of Naval Battles for Wedding Festivities of Cosimo Il de'Medici, Ship of Neptune

Cooper Hewitt, Smithsonian Design Museum
The ship of Neptune decorated with shells on the far right is led by two sea horses on the far left. In the center, winged male figures with oars row the ship. To the right of these figures are a group of male soldiers. 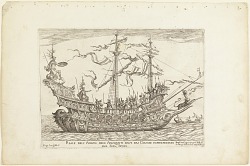 From a Series of Naval Battles for Wedding Festivities of Cosimo Il de'Medici, Jason's Ship

Cooper Hewitt, Smithsonian Design Museum
An elaborately decorated ship in profile moving from left to right with many banners raised. Soldiers stand on the deck of the ship as well as Jason, wearing a large helmet and seated towards the left. A goddess figure sits behind Jason in the rear of the ship holding a spear and shield. 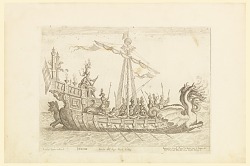 From a Series of Naval Battles for Wedding Festivities of Cosimo Il de'Medici, Ship of Heracles

Cooper Hewitt, Smithsonian Design Museum
Profile of a ship decorated with ornamental banding, moving left to right. The figurehead decorated with the Hydra and the stern decorated with Cerberus. Soldiers stand on the deck of the ship and Heracles sits towards the right.

This Swedish King Built a Warship That Redefined Naval Combat

Smithsonian Channel
In the 1560s, Eric XIV of Sweden was determined to change the way naval battles were fought. The result was Mars: a giant of a warship that would rely on artillery and firepower to devastate her rivals. From the Show: Monster Shipwreck http://bit.ly/2n5vG97

This wallpaper commemorates Commodore Isaac Hull and the first important American naval victory of the War of 1812 in a battle between the USS Constitution and the British frigate HMS Guerriere. Commodore Hull was credited for the victory owing to his superior seamanship, even though the Constitution was nearly 50% larger with a better firing... 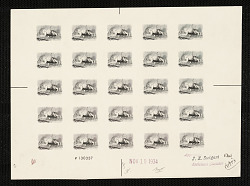 In late 2016, a team of 20 researchers took a detailed look at Ampelakia Bay on the Greek Island of Salamis and found what they believe is one of the ancient world’s most famous naval bases. The commercial and likely military harbor appears to be where the Athenian leader Themistocles prepared his united Hellenic fleet to battle the forces of Persian ruler Xerxes in 480 B.C.

According to Philip Chrysopoulos at the Greek Reporter, in November and December during a preliminary survey, researchers found evidence of harbor structures, fortifications and other remains of buildings in the historic bay that indicate it once served as a harbor in Classical and Hellenistic periods.

Rossella Lorenzi at LiveScience details that along the southern edge of the ancient harbor is a wall spanning about 200 feet with a remains of small, fortified round tower at the end. A large 160-foot stone mole, or breakwater, extends along the east side, defining the military zone of the harbor. The researchers also discovered another 130-foot breakwater and another wall (this one spanning 100 feet) with the remains of a square tower attached. Ceramics, broken jugs and coins found at the site also indicate that it was used at the time of the battle.

"This evidence, supplemented by the information from ancient historical and literary sources, leaves no doubt about the role of the bay as the main assembly and launching point of the Greek fleet in close proximity to the theater of the sea battle in the straits,” Yannos Lolos, president of the Hellenic Institute of Marine Archaeology, which partnered with a variety of scholars and scientists from other universities and archaeological organizations for the study, tells Lorenzi.

According to the Ministry of Culture, the research used aerial surveys to document all of the visible structures in the harbor and created an underwater map of the port that will guide the next stages of a joint research survey, which will continue until 2018.

The Battle of Salamis is considered one of the most significant naval battles in ancient history. It was the culmination of the Persian Wars, in which the ruler Darius began pushing the Persian Empire into mainland Europe. The Greek city-states held off a Persian invasion at the Battle of Marathon in 490 B.C. Ten years later, in August, 480 B.C., under the command of Darius’ heir Xerxes, the Persians fought a fleet of Greek triremes at the battle of Artemision. That clash was considered a draw.

The Greek fleet regrouped at Salamis to plan out the next fight. Sources vary, but the Greeks likely had between 300 and 400 ships while the Persians had roughly 1,200 or more. The next month, the forces clashed again, with the smaller Greek force winning a decisive victory over the Persians. A year later, the Greeks and Persians fought at Plataea on the Greek mainland. After suffering a defeat there, the Persians largely gave up their efforts to conquer Greece.

“It is difficult to predict what would have happened if the Greeks had lost at Salamis, but it is clear that a Persian victory would have had immense consequences, not only for Greece, but also for the rest of Europe," University of Copenhagen archaeologist Bjørn Lovén tells Lorenzi. "Had the Persians won, I truly doubt that we would have seen the effects that these amazing cultural and social developments have had on us today.”

Last year, researchers announced that they had discovered three Athenian naval bases in the port of Piraeus that were built on Themistocles orders. Those bases are where he constructed and outfitted new ships in anticipation of a naval attack by Xerxes.

Remains of a round tower found in the Salamis Harbor (Ministry of Culture and Sports/V. Mentoyannis)
1-24 of 207 Resources