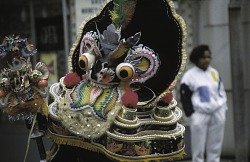 Anacostia Community Museum Archives
A festival participant wearing a Bolivian mask in the Parade of Nations during the Latino Festival in 1991.

The decorated black mask features red, yellow and green feathers inspired by the red, yellow and green colors found in the Bolivian flag. This mask is from a sculptural, barrel-like costume for the traditional Bolivian dance called La Morenada (Dance of the Black Slaves). The Morenada dance and costume style is inspired by African elements which speaks to the diversity of the Bolivian people. A popular theory describes the dance as being inspired by the African slaves brought into Bolivia to work in the Silver Mines of Potosí, Bolivia. Founded in 1971, the Latino Festival in Washington D.C. (also known as Fiesta D.C.) is an annual festival that celebrates Latin American and Latino culture. The festival features a parade, children's festival, food, arts and crafts and a community-based organization fair. The Parade of Nations features hundreds of dancers from Latin America, Spain and the Caribbean wearing traditional dress and performing traditional dances that represent their countries. 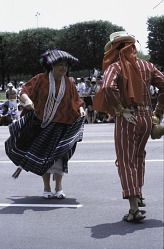 Anacostia Community Museum Archives
A woman and man perform a folk dance from Guatemala in the Parade of Nations at the 1991 Latino Festival on Constitution Avenue in Washington, D.C.

To the left, a woman wears a red huipil, long beaded necklaces, a skirt and a folded blanket over her head. To the right, the man wears a red and white striped Euro-American style pants and a long sleeve shirt.

Why a Latino Gallery Matters

Smithsonian Latino Center
Hear from members of the Smithsonian National Latino Board as they explain why they are supporting a national gallery dedicated to telling a Latino history of the United States. Donate: https://latino.si.edu/support/donate

SI Center for Learning and Digital Access
Exhibits Latino/a contributions to the history, arts, and culture of America from a Latino/a perspective. Includes current and archived exhibitions on Argentina, Panamanian passages, Mexican treasures of the Smithsonian, the Division of Community Education of Puerto Rico, LEGACY: Spain and the United States in the Age of Independence 1763-1848, and the Day of the Dead. Bilingual English/Spanish. 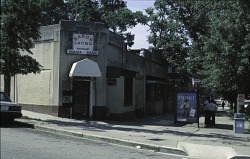 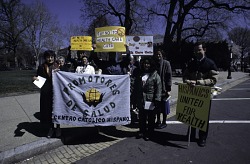 Anacostia Community Museum Archives
On April 5, 1995, ralliers gathered on the National Mall for a Latino Health Care rally to protest proposed reductions in Medicare and Medicaid in Washington, D.C.

A group of Latino ralliers hold banners that say (from left ro right): Promotores De Salud Centro Catolico Hispano (Community Health Advisor Program), Say No the Health Care Cuts Unhealthy Children Equals Unhealthy Economy, Say No To Health Care Cuts, Say No To Health Care Cuts, Hispanics United for Health. The Archdiocese of Washington created The Spanish Catholic Center in 1967 in an effort to provide education, health and social services to immigrants from around the world. The Spanish Catholic Center is a member of Catholic Charities, the largest private outreach organization in the Washington, D.C. area. 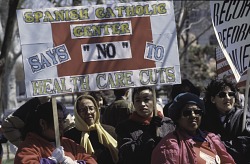 Anacostia Community Museum Archives
On April 5, 1995, ralliers gathered on the National Mall for a Latino Health Care rally to protest proposed reductions in Medicare and Medicaid in Washington, D.C.

SI Center for Learning and Digital Access
Interactive site for students to learn about prominent Latino figures in a virtual gallery, listen to Latino music, and explore Latin American history and holidays. 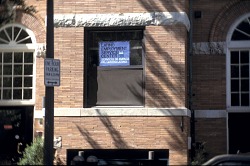 Anacostia Community Museum Archives
Photographic image of the Latino Employment Service Center in the Adams Morgan neighborhood of Washington D.C on May 5, 1994.

SI Center for Learning and Digital Access
Students examine the work of American painter Carmen Lomas Garza in this set of four lessons, divided into grades K-2, 3-5, 6-8, and 9-12. The youngest students write a story based on a scene from Garza's childhood. Older students consider the role that culture plays in our lives.

“Right now, being a Mexican in the United States is very scary,” says Ilan Stavans, Professor of Latin American and Latino Culture at Amherst College and editor of the recently published Norton Anthology of Latino Literature. “You are often at the bottom of the scale, and there is a lot of animosity.” Literature, Stavans says, can help smooth interactions among the diverse ethnic groups and cultures in the country. The 2,700–page anthology, which includes 201 authors, arrives at a pertinent moment. According to recent census statistics, more than one out of every two people added to the U.S. population between 2008 and 2009 is Hispanic, and by 2050, the group will increase to 30 percent of the U.S. population. Stavans recently discussed with me the exhaustive project of assembling the collection and the evolving role of Latino culture in the United States.

Can you describe the genesis of the project?

The project started 13 years ago. By then, a number of Latino writers had crossed from the margins to center stage. There was a lot of interest in how people would articulate this new literature that was emerging. Would it be a literature of specific groups, for example, Puerto Rican literature or Cuban American literature? Or, was there one single river that had a number of tributaries? Henry Louis Gates, Jr. had just published The Norton Anthology of African American Literature, and I thought that it was time for something similar to be done with Latino writers. Latino literature has now consolidated its presence. It is clear that it is here to stay and that it is pushing the limits of its own conditions, with novelists of all sorts reaching beyond what I would described as Latinidad— or what it means to be Latino in the United States. In the last several decades, Latinos finally have been entering the middle class. This anthology not only explains the forces behind that economic move but justifies the move. It is a book that all middle-class Latinos need, proof that we’ve made it: We’ve arrived.

How did you and fellow editors decide to use the term “Latino” in the title instead of other appellations such as “Hispanic”?

Two prominent terms, “Latino” and “Hispanic,” refer to people living in the United States who have roots in Latin America, Spain, Mexico, South America, or Spanish-speaking Caribbean countries. “Hispanic” is a reference to Hispania, the name by which Spain was known in the Roman period, and there has always been strong ambivalence toward Spain in its former colonies. Hispanic was the term adopted by the government—by the Nixon government in particular— and that made the community feel it was being branded. The term “Latino” has emerged as more authentic, although it’s gender specific. In any case these two terms, at present, keep on fighting for space. Newspapers will sometimes use both in the same article as if editors chose not to choose. The anthology’s editorial team endorsed the community-preferred word and made that clear in the preface.

Given that so much of the material included in the collection is political or historical and not necessarily what we think of as literature, how did the editors define literature?

The anthology understands literature in a very open-ended fashion, not only short stories and poetry and novels, but memoirs and nonfiction books, logs and letters and types of music ranging from corridos [traditional Mexican ballads] to pop songs, also cartoons, comic strips, and jokes. We ended up endorsing “literature” as a written expression that conveys the search for identity. Historically, the 19th century is defined by annexations and internal turmoil. For instance, the Treaty of Guadalupe Hidalgo in 1848 gave more than half of Mexican territory to the United States. Latino writers of that time could not avoid having some sort of involvement, either as activists or simply as observers of what was taking place.

Image by AP Photo / Daily Hampshire Gazette, Kevin Gutting. Latino writer Martín Espada is one of many mentioned in The Norton Anthology of Latino Literature who say Walt Whitman influenced them and consider him as a godfather. (original image)

Image by AP Photo / Frank Eyers. Jimmy Santíago Baca is an award-winning poet who taught himself to read and write while in prison at age 19. Along with Williams and Espada, Baca also views Walt Whitman as a godfather. (original image)

What are some of the common themes you found in Latino writing as you assembled this collection?

First and foremost is the idea of the search for a place to call home, individually and collectively. Are we at home in America? What does America mean to us? And what do we mean to America? This question of home results in tension between rebellion and consent. A current throughout the collection is frustration, anger and outright rebellion, particularly during the Civil Rights era, and the quest for validation. Then there’s the gender theme: How is gender dealt with in Latino society? The works in the anthology also explore the impact of poverty and alienation on a person’s mind and spirit. And then there’s the theme of language: What are our words? Are they Spanish or English? Or are they to found in Spanglish?

A number of the Latino writers included in the anthology say Walt Whitman influenced them. Why do you think this is so?

We can’t talk about America today without feeling that the ghost of Whitman is sitting next to us, particularly when you are dealing with so-called minority or ethnic literature. In the 19th century, Whitman was receptive to the idea of multitudes—a country that is made of many countries. He looks at New York City as a metaphor for the rest of the country, and that New York City is a symphony of voices, of backgrounds. In particular, when it comes to poetry, there are a lot of Latino writers that view him as a godfather, or even as a compadre. William Carlos Williams, Martín Espada, and Jimmy Santíago Baca, for instance. Whitman is in writers who want not only to produce aesthetic artifacts but also use those cultural and literary artifacts as tools or weapons for change.

In the section titled “Into the Mainstream” you say that Latinos are united by their language and minority status. Do you think that the literature will change when Latinos are longer in the minority?

It has been said that by the year 2050 one of every three Americans will be of Latino background. Maybe in 2050, you won’t have to put together a Norton Anthology of Latino Literature because Latino literature will be American literature. But, on the other hand, the more global the world and the country become, the more we emphasize our differences. The more we all look the same and eat the same food and dress the same way, the more we want to say that some of us came from Italy and some of us came from Ireland, or we’re Jewish or Latino. I think that we will see something not unlike the Jewish American experience, in which Latino culture becomes so integrated into the DNA of mainstream culture that it will be very difficult to distinguish between one and the other. How long that will take, I don’t know.