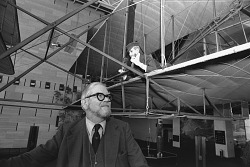 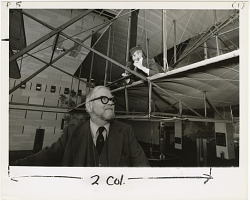 Professor Charles Gibbs-Smith, the Charles A. Lindbergh Chair of Aerospace History at National Air and Space Museum, with the Wright Flyer.

A call for feather sampling 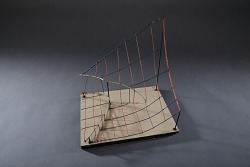 National Museum of American History
In the 1870s physicists in Scotland and the United States began to make three-dimensional models of the thermal properties of matter. The height of this wire surface corresponds to the volume of ice, water and steam as this changes with pressure (pressure increases coming toward the front of the model) and temperature (temperature increases going to the right). The solid state – with relatively slow changes in volume with temperature and pressure, and low temperatures - is represented by the relatively flat surface on the left. The part of the board under it is marked S. When ice melts, the volume decreases until melting is complete. Water expands more rapidly with temperature than ice, so that the surface rises more rapidly from the middle of the front going right. The part of the board under this section of the surface is marked L. As temperature rises, water turns to steam, and the volume increases even more rapidly. The section of the board under this part of the surface is marked V for vapor. A paper sticker glued to the underside of the base reads: No. 253 (/) Water Steam and Ice. This is one of a series of nine models Baker made that relate to thermodynamic surfaces. It was designed during his years at the University of Iowa under the supervision of his German-born colleague Karl Eugen Guthe (1866–1915), who taught in the physics department there from 1905 until 1909. Baker’s correspondence indicates that copies of the model were purchased by Columbia University and by the University of Michigan. The model remained in Baker’s catalog as late as 1931. A card catalog in the Baker papers indicates that the model sold at one time for $7.50. This particular example of the model was on loan for exhibition at MIT from 1939 until the mid-1950s. It, along with the other models in accession 211257, came to the Smithsonian from MIT in 1956. References: Accession file 211257. J. Willard Gibbs, “A Method Geometrical Representation of the Thermodynamic Properties of Substances by Means of Surfaces,” Transactions of the Connecticut Academy, 2, 1873, pp. 382–404. Gibbs refers to earlier work of the Scottish engineer James Thomson, who devised a surface for representing the pressure volume and temperature of carbonic acid and carbon dioxide. H. Randall to Baker, January 15, 1908 and Columbia University to Baker, August 6, 1918, Richard P. Baker Papers, University Archives, University of Iowa, Iowa City, Iowa. Richard P. Baker, Mathematical Models, Iowa City, 1931, p. 18.

On the fossil genus Basilosaurus, Harlan, (Zeuglodon, Owen) with a notice of specimens from the Eocene green sand of South Carolina. By Robert W. Gibbes ..

Extracted from the Journal of the Academy of Natural Sciences of Philadelphia. ser. 2, v. 1, Art. I.

Smithsonian Libraries
Extracted from the Journal of the Academy of Natural Sciences of Philadelphia, n.s., v. 1, pt. 1, 1847.

With: On the fossil genus Basilosaurus, Harlan, (Zeuglodon, Owen) with a notice of specimens from the Eocene green sand of South Carolina / Robert W. Gibbes. [Philadelphia, 1847] 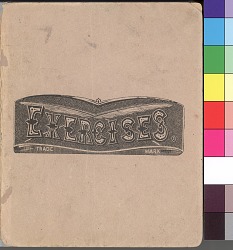 National Anthropological Archives
Fort Marion, also known as Castillo de San Marco, is a stone fortress in St. Augustine, Florida. Between 1875 and 1878, seventy-two prisoners from the southern plains were incarcerated in the fort. Captain Richard Pratt supervised the prisoners during their incarceration at Fort Marion. The prisoners consisted of 27 Kiowas, 33 Cheyennes, 9 Comanches, 2 Arapahos, and a single Caddo. With the exception of one Cheyenne woman, all the prisoners were men. They had been accused of participating in the recent Red River War, earlier hostilities, or both. With the exception of the wife and daughter of one of the Comanche men, the prisoners families were not allowed to accompany them to Fort Marion. For further information on Fort Marion see Karen Daniels Petersen, Plains Indian Art from Fort Marion, University of Oklahoma Press, 1971 and Richard Pratt, Battlefield and Classroom, ed. by R. M. Utley, Yale University Press, 1964.

Dr. Lincoln Godfrey of Ardmore, Pennsylvania inherited the book from his cousin Mrs. Bessie Valentine of Bryn Mawr, Pennsylvania. Upon Mr. Godfrey's death in 1959, the book passed to his wife, Mrs. Patricia Drexel. In 1998, the National Museum of Natural History purchased the book from the Robert Abbe Museum of Bar Harbor, Maine and Patricia and Victor Drexel.

Twenty drawings in a commercial exercise book that has been rebound. The book had been sewn into a second cover prior to its acquisition by the Smithsonian. This second cover was removed when the book was rebound. It is still with the manuscript. The drawings depict hunting, courtship, dance, social gatherings, Indian scouts, mounted and dismounted warriors, and part of the Kiowa Sun Dance. The inside of the front cover is inscribed, "Capt Pratt USA", "By the Indians", "By the Indians incarcerated in Fort Marion St. Augustine in 1876", "Engaged in the Custer Massacre", "Care of Capt Pratt in charge assisted by the following ladies Mrs Linethurst, Mrs Gibbs - Mrs S' Mother St Augustine Mrs Kingsly Gibbs aunt Mrs Valentine Phila Miss Reed", "Carlisle was the outcome of Capt Pratt's efforts assisted by Mrs Kingsly Gibbs of St Augustine". The back cover is inscribed "Works of the Indians while in prison in Fort Marion St Augustine Florida/ after the Custer Massacre in care of Capt Pratt/ The founder of Carlisle/ These Indians finally taken there for housing and taming/ by the Government/ under the care of Capt Pratt USA". In addition to the inscription, the back cover bears the image of a man wearing a breechcloth, which was scratched into its surface. The name "ZOTOM" appears in stencil block letters on the back cover and the inside of the front cover. Although Zotom was a noted Kiowa artist, it is not clear that he is responsible for the drawings. Candace Greene notes that they are unlike his later work and early documented examples of his drawing style have not been identified.

The Mysterious Motives Behind the Theft of ‘The Scream’

The Scream is a compelling image–a distorted man stands on a bridge, mouth open wide. It's also one of the most familiar in Western art: It was mass-produced by the artist Edvard Munch, and the figure of the man has inspired numerous pop culture references. At least one neurobiologist even thinks we’re hard-wired to respond to the face, writes Kristy Puchko for Mental Floss. In fact, The Scream is so compelling that some art thieves were compelled to steal from the Munch Museum in Oslo, Norway, at gunpoint, on this day in 2004. And nobody knows why they did it.

The painting is “almost impossible to value,” New York art dealer Franck Giraud told The New York Times at the time of the theft. He estimated that “it could sell for over $100 million and become the most expensive painting in the world,” In 2012, this actually happened with a different version of the painting. But given the difficulty of reselling such a famous painting, the value alone can’t explain why art thieves might have stolen it. The painting might have been taken for ransom, Walter Gibbs and Carol Vogel wrote for the Times.

But it was hard to know, especially given the showy (and dangerous) manner in which the thieves took the painting and another famous Munch piece, Madonna. The museum was open and it was just after 11:00 a.m. when two robbers wearing balaclavas entered the museum and threatened museum guards, who weren’t armed, with pistols.

Like 'The Scream,' Munch produced several versions of 'Madonna.' This is the one that was stolen from the Munch Museum. (Wikimedia Commons)

“Speaking in Norwegian, one of the men held the two guards at gunpoint, ordering them to the floor, while the other used a wire cutter to clip the framed paintings free of the wall,” Gibbs and Vogel wrote. “Witnesses described the thieves as clumsy, even dropping the paintings on the way out.”

The discovery later that day of the paintings’ frames and glass led art fans to fear the art had been damaged. But, two long years after the initial theft, the paintings were both recovered. Although some reports had suggested the paintings might have been destroyed, neither was very badly damaged–although, wrote Jonathan Jones for The Guardian in 2007, the damage the paintings did sustain “was caused by carelessness and neglect.”

The Scream and Madonna, he and others believe, were stolen to distract police from another investigation, one into a murdered Norwegian police officer. “This had not been a sophisticated crime,” the curator of the Munch Museum, Ingebørg Ydstie, told him. By the time the paintings were found, the perpetrators had already been identified, charged and found guilty of the theft of the paintings. Their motives remain mysterious to art fans, but they probably had little to do with the monetary value of the paintings.

It wasn’t the first time a version of the painting had been stolen–Munch did four versions in all, all confusingly titled The Scream. Two of them are finished paintings which belong to Norway, both of which have been stolen and recovered, while the other two–including the one that sold for almost $120 million in 2012–are pastel drawings.

In the 1994 theft, writes Puchko, “bandits placed a ladder up to the window of the National Gallery in Oslo, slunk inside, and made off with the other version of The Scream.” They left a note saying “Thanks for the poor security,” she writes. That time, the painting was back within three months. As Richard W. Stevenson reported for the Times, the story of its theft and recovery was equally mysterious and dramatic. There's just something about this painting. It’s been an exciting year at the Smithsonian Institution Archives. Reference and Photo Fulfillment merged to form an expanded Reference Team, streamlining the process of ordering photos and obtaining permission to publish them.

In addition, the photo collections housed at the former Smithsonian Photographic Services spaces in the National Museum of American History have been moved to a newly completed Cold Vault storage facility at the Smithsonian Institution Support Center in Landover, Maryland. This is the culmination of six years of planning, building and moving.

Researchers will have access to these images through our website. This quarter’s Hot Topics illustrations are examples of seasonal photographs currently available online.

When asked what the Smithsonian Institution Archives collects, we say we hold records about the history of the Smithsonian and its people, programs, research, and activities. While accurate, this doesn’t really give anyone a clue about what is actually in those records.

The SIA Reference Term handles an average of around 6,000 queries per year, and if you ask us what people have been researching at the Archives recently, you’ll get some pretty interesting responses. Although not comprehensive, here’s a snapshot of the diverse range of information encompassed by the history of the world’s largest museum complex!

Over the past three months,  researcher projects have included:

Upcoming publications using our photos or documents include: