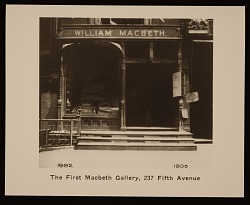 Archives of American Art
1 photographic print : b&w ; 21 x 26 cm. This was the first location of the Macbeth Gallery at 237 Fifth Avenue, New York, N.Y.
Item is a copyprint. 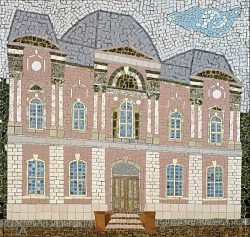 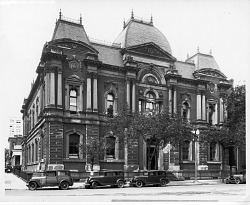 Smithsonian Archives - History Div
Original image may be located in the National Archives and Records Administration.

Exterior of the original Corcoran Gallery of Art designed by architect James Renwick, Jr. The c. 1930s image shows the building when it served as the U.S. Court of Claims. The niches on the facade, which once held statues by Moses Ezekiel, have been turned into windows. Some deterioration (sapling of stone) is visible at the base of the facade. The building is located at the corner of 17th Street and Pennsylvania Avenue, N.W., Washington, D.C., across from the Old Executive Office Building. 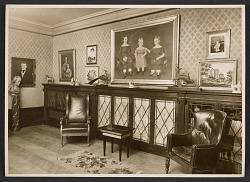 Photo shows a room within Edith Halpert's American Folk Art Gallery. The gallery was incorporated on October 9, 1931, and was located on the second floor above the Downtown Gallery at 113 West 13th Street in New York. 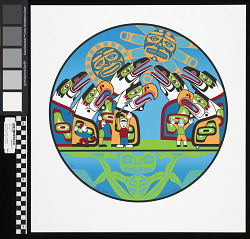 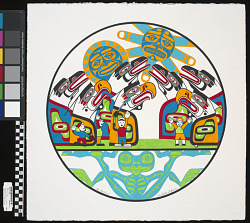 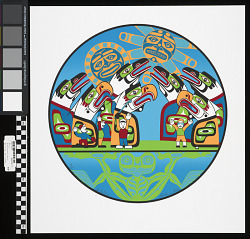 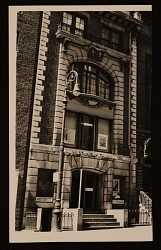 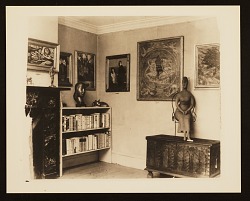 Item is a copyprint. 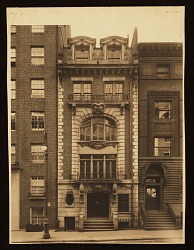 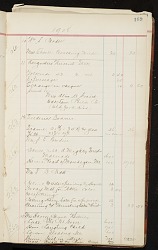 Archives of American Art
Account Book : 1 v. ; 35 x 23 cm. The title of this Macbeth Gallery account book is Order Book 2.
On page 169 there is a record of Gertrude Vanderbilt Whitney purchasing art work for the Eight Show of 1908.

Every day a work of art is stolen somewhere in the world. Thieves rip paintings from walls, sever canvases from their frames with razors or even screwdrivers, raid warehouses with assault rifles, saw sculptures from their bases with chainsaws and haul them away in trucks. In February, three masked men raided the E.G. Burhle Collection, a small museum in Zurich, Switzerland. At gunpoint, they forced patrons and museum staffers to the floor and made off with four 19th-century paintings worth about $165 million. Two of the paintings were later found in an unlocked car parked at a psychiatric facility, less than a mile from the museum. The thieves and the other two paintings remain missing. According to the Art Loss Register, a private company that tracks and recovers purloined art, at least 10,500 works of art and antiquities were stolen last year.

Art crime's history is long and bloody, dominated by the plundering of invading armies. Think of the eight Egyptian obelisks that still anchor the piazzas of Rome, spoils of the ancient Roman Empire's conquest of the Nile kingdom. Napoleon famously looted thousands of pieces from Italy. And innumerable works were stolen by the Nazis, forcibly sold, or otherwise lost, during World War II.

More recently, museums and ancient sites in Afghanistan and Iraq have suffered massive losses amid armed conflict while countries such as Cambodia, with rich artistic histories but meager resources to protect them, see their treasures smuggled out of the country and lost to history.

Most art crime, however, occurs on a much smaller scale, with about 40 percent of thefts reported to the Art Loss Register coming from private homes or collections and about 15 percent from museums and galleries. Whether it's a dramatic museum heist or opportunistic house-burglary, all of them fuel a lucrative black market. Because most thefts go unreported, the illegal trade in art and antiquities amounts to roughly a $6-billion a year industry. What's stolen changes with the fashion of the times, but unlike the stock market, the market for stolen art and antiquities has never and likely never will collapse.

Click here to view a slideshow of the past 100 years' ten most incredible art heists.

Image by Free Agents Limited/CORBIS. Stolen from the Louvre Museum, Paris, France, 1911
Status: Recovered
Displeased that such a monumental work by the legendary Italian artist hung in a French museum, a Louvre workman from Italy named Vincenzo Perugia hid in the museum after closing one night and cut the masterpiece from its frame. Among the suspects French authorities interviewed regarding the theft was Pablo Picasso. Two years later, Perugia was caught and the painting was recovered when he tried to sell it for $100,000 to the Uffizi museum in Florence, Italy. (original image)

Image by Archivo Iconografico, S.A. / Corbis. Stolen from the St. Bavo Cathedral, Ghent, Belgium, 1934
Status: Still missing
In the early 1400s Flemish painter Hubert Van Eyck began work on an elaborate altarpiece for the St. Bavo Cathedral in Ghent, Belgium. Comprising 24 different scenes, the panel painting may at one time have included mechanized movement and music. In 1934, The Just Judges panel was stolen from the altarpiece's lower register. The panel was never recovered and is feared destroyed, but it did find lasting fame in Albert Camus’ 1956 novel, “The Fall.” (original image)

Image by Pizzoli Alberto/Corbis Sygma. Stolen October 1969
Status: Still missing
After killing a young man in Rome in 1606, the revolutionary young artist Michelangelo Merisi da Caravaggio, master of chiaroscuro and intense realism, went into exile. During this time he produced dozens of masterworks, including an emotional nativity scene for the church of San Lorenzo in Palermo, Sicily. In October 1969, two thieves cut the nativity scene from its frame. The painting has never been found and is feared destroyed. (original image)

Image by The Irish Image Collection/Corbis. Stolen from Russborough House, Ireland, 1975-2002
Status: Partially recovered
Russborough House, which holds the Alfred Beit collection of fine art (including masterpieces by artists such as Rubens, Goya and Gainsborough) seems to be a chronic target for art heists. The first robbery occurred in 1974, when Irish Republican Army members stole 19 paintings. The paintings were found and the thieves jailed. In 1986, a gang led by Dublin crime boss Martin Cahill took 18 paintings. Of the lot, 16 have been recovered. In 2001, an armed gang stole a Gainsborough and a work by Belotto. The following year, thieves took five paintings, which were later recovered.  (original image)

Image by Danny Lehman/CORBIS. Stolen from the National Museum of Anthropology, Mexico City, Mexico, 1985
Status: Most items recovered in 1989
After visiting the museum at least 50 times to calculate what they would steal and how, the thieves broke into the grounds on Christmas Eve. They crawled through ductwork to reach the galleries from where they took 124 small but incredibly valuable Mayan, Aztec, Mixtec and Zapotec objects, including a vase then valued at more than $20 million. Two years later, 111 of the artifacts were found in a private home, the other 13 artifacts remain lost. (original image)

Image by Bettmann/CORBIS. Stolen from the Isabella Stewart Gardner Museum, Boston, USA, March 18, 1990
Status: Still missing
In what may be the biggest art heist in U.S. history, two thieves dressed as Boston police entered the museum and stole 13 works worth an estimated $300 million: Vermeer's The Concert, three works by Rembrandt, five by Degas, Manet's Chez Tortoni, Flinck's Landscape with an Obelisk, a Shang Dynasty beaker, and a gilt Napoleonic finial. The thieves left the museum's most valuable painting, Titian's Rape of Europa on the wall. Despite a $5 million reward, none of the works have ever been found. (original image)

Image by Abu Dhabi Islands Archaeological Survey. Stolen from the Kuwait National Museum and the House of Islamic Antiquities, Kuwait City, Kuwait, 1990-1991
Status: Most items recovered
In a move that recalled the looting habits of long-gone empires, some 20,000 items of Islamic art and craft were taken from the two Kuwaiti museums during the Iraq occupation, loaded onto trucks and driven to Baghdad. Almost all of the items were recovered after the war. (original image)

Image by Eye Ubiquitous/CORBIS. Stolen from the Angkor Wat temple complex, Cambodia, 1993
Status: Still missing
Armed with grenades and assault rifles, some 300 thieves stormed the storehouse of Cambodia's most treasured historical site in February 1993. They quickly overwhelmed the unarmed guards on duty, killing one of them, and made off with 31 statues. The statues joined tens of thousands of other priceless artifacts from the ancient Khmer kingdom on the black market. Looting and international trade of Cambodia's ancient treasures continues at an alarming rate despite domestic and international prevention and recovery efforts. (original image)

Image by Junge Heiko/epa/Corbis. Stolen from the National Gallery of Norway, Oslo, Norway, 1994. Stolen from the Munch Museum, Oslo, Norway, 2004
Status: Both Recovered
The Norwegian artist painted four versions of his most famous work, The Scream; two were stolen. The first theft occurred on February 12, 1994, when two thieves broke into the National Gallery in Oslo. Three men involved in the crime were arrested, and the painting was restored to the museum. A decade later, two men took The Scream and Munch's Madonna from the Munch Museum in Oslo. The paintings were recovered in 2006. (original image)

Image by Reuters/CORBIS. Stolen from the National Museum, Baghdad, Iraq, and from some 12,000 archaeological sites across Iraq in 2003
Status: Partially recovered
In the midst of the fighting during the 2003 U.S.-led invasion of Iraq, Baghdad's National Museum, home to countless, priceless Sumerian, Assyrian, Mesopotamian, Babylonian, and Islamic art and artifacts – perhaps the most important collection of such antiquities in the world – was looted, losing an estimated 15,000 pieces. Since then, about 4,000 items have been recovered. Today, illegal digging at archaeological sites continues unabated throughout the country. (original image) 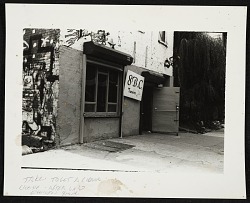 Identification (handwritten):Taken to get a liquor license - after we'd been open 8 months. 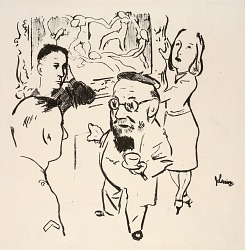 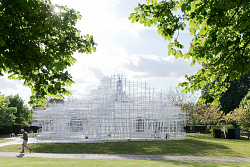 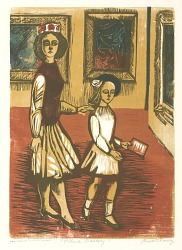 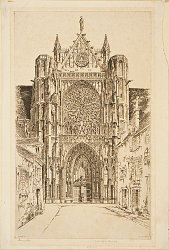 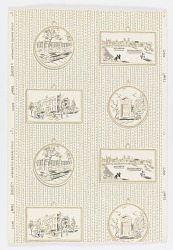 Cooper Hewitt, Smithsonian Design Museum
Alternating round and rectangular frames are suspended from nails by rings, each containing a scene of early Washington Square Park. Scenes include the Seventh Regiment Armory on Review, former Rhinelander Mansion on Washington Square North, a door with fan light, and a view of the park fence. The background has vertical gray stripes alternating with vertical rows of tear drops. Gold is used in the picture frames and in the pictures. The design copies a print room-style wallpaper. 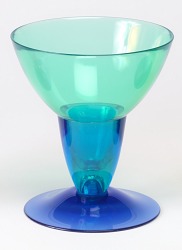 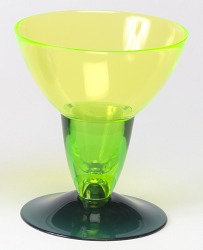 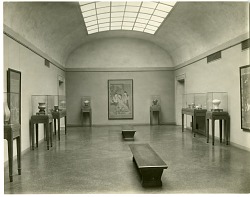 Smithsonian Archives - History Div
Looking north in Gallery XVIII at the Freer Gallery of Art, exhibit shows the installation of Chinese pottery in exhibit cases and Ming paintings on the walls. Benches for viewing are in the middle of the room.
1-24 of 118,251 Resources