Smithsonian Environmental Research Center
Itching to come to SERC for a field trip but challenged by funding? There a lot of opportunities out there for grants for field trips. Here’s one from Target! Check it out by clicking the image! Feel free to use … Continue reading →

Sidedoor hits the road, sneaking behind the scenes for the ultimate Smithsonian field trip we never took as kids. Lizzie and producer Justin O'Neill journey by bike, train, and even horse (okay, plastic horse) in a romp from museum to museum, encountering a hungry predator, a group of Broadway monsters, the last work of an iconic painter, and lots more. Join us!

Links from the episode:

Tarantula Feedings at the National Museum of Natural History

Mitsitam Café at the National Museum of the American Indian

by Kristen Minogue Move over, blue crabs. There’s a new predator in the education department. Sharks are making waves as the latest addition to field trips and engineering programs at the Smithsonian Environmental Research Center (SERC). This spring, SERC added sharks as another station in its “Shoreline Connections” and “Exploring Nature” field trips. The education […] 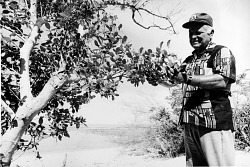 F. Raymond Fosberg on a Field Trip to Sri Lanka

Dr. Fosberg was a botanist especially noted for his work on tropical and Pacific basin vegetation. He was also the founder and editor of Atoll Research Bulletin, a well-known and frequently consulted conservationist, and a several time organizer of major scientific conferences. He was associated at various times with the U. S. Department of Agriculture, United States Geological Survey, and Smithsonian Institution. In 1966 he joined the Smithsonian's National Museum of Natural History in the Ecology program. In 1968 Fosberg transferred to the Department of Botany, where he became curator. In 1976 he became Senior Botanist, and in 1993 Botanist Emeritus. He published more than 600 papers on plant classification, plant distribution, ecology and conservation, and contributed to many scientific books. 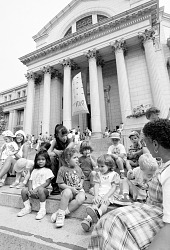 SEEC Children on a Field Trip

Children and their teachers from the Smithsonian Early Enrichment Center (SEEC) pause on the steps of the National Museum of Natural History during a recent field trip.

Smithsonian Astrophysical Observatory
When astronomers want to study young stars, this cluster - called Cygnus OB2 - is one of the first places they look.

SERC Field Trips: How to Prepare

Smithsonian Environmental Research Center
Teachers: Want to give your students a taste of outdoor science at the Smithsonian? The Smithsonian Environmental Research Center (SERC) does research on the western shore of Chesapeake Bay, and hosts hands-on, curriculum-based field trips for students in grades K through 8! In this 5-minute video, learn what SERC does, what to bring, how to dress and what to expect so your class can get the most out of their time doing science on the Bay.

A Virtual Field Trip to the Smithsonian Environmental Research Center

Smithsonian Education
Take a virtual fieldtrip to the center from the comfort of your computer and interact with Haddon as he describes approaches to teaching climate change using Smithsonian resources. Presented by: Mark Haddon Director of Education Smithsonian Environmental Research Center Original Airdate: September 29, 2009 You can stay connected with the Smithsonian's upcoming online events and view a full collection of past sessions on a variety of topics.: http://www.smithsonianeducation.org/educators/events/online_events.html 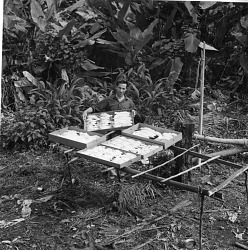 On far right is John Frederick Gates Clarke, later Curator of Lepidoptera, Department of Entomology, National Museum of Natural History, collecting butterflies with fellow students on a field trip to Union Flats, Washington, in 1930, when Clarke was 25 years of age. Clarke began collecting insects while he was a youth in Vancouver, British Columbia.

And a Star to Steer Her By Field Trip Guide

SI Center for Learning and Digital Access
Pre-field-trip teaching guide introducing students to the tools and techniques used to navigate by the stars. Provides classroom activities and background information. 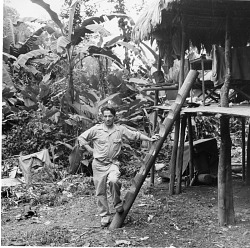 Watson M. Perrygo on a Field Collecting Trip to Panama

Watson M. Perrygo, National Museum of Natural History taxidermist and field collector, stands with one foot up on a notched tree trunk ladder used to climb into a hut built on stilts. He is at the mouth of Rio Imamado in Darien, Panama, on one of his trips with sixth Secretary Alexander Wetmore to collect specimens and conduct ornithological field work.

On a sunny day in early June I biked to the Brooklyn Navy Yard, a gigantic plaza that's served the needs of businesses who need a lot of space since it was decommissioned in the 1960s.

Today it’s home to a large production studio, a distillery, various art studios and, most notably, the world’s largest rooftop soil farm, Brooklyn Grange. The building housing the farm still clearly boasts an industrial feel; everything’s grey and heavy-duty materials are required. Exiting the elevator on the top floor and walking up a short final flight of stairs is an even more jarring experience because of it.

Opening that last door lets in fresh air with the unmistakable scents of agriculture: dirt, compost, flowers. You see the skyline of nearby Brooklyn neighborhoods and Manhattan just across the river, but right in front of you is a seemingly endless stretch of bright green spring plants.

In a corner, under a little bit of shade from some kind of metal outcropping, is an educator from City Growers. She’s gesturing excitedly while a group of surprisingly observant kids ask questions about pollination and agricultural systems. One of them is wearing a helmet painted to look like a favorite flower the noble honeybee—the reason the kids are here.

City Growers is a nonprofit educational organization founded by members of, but financially mostly unrelated to, Brooklyn Grange. The group conducts all kinds of educational efforts mostly aimed at the city’s many schoolkids; they’ll go to schools and do demonstrations on how to set up compost, or host workshops where kids plant seeds, or show kids the harvest at Brooklyn Grange’s rooftop farm (which totals more than 50,000 pounds of organic produce per year, by the way). “Agriculture is something that many city kids don’t really have access to,” says Courtney Epton, the director of education for City Growers, who sports two very small golden earrings shaped like a bee and a large tattoo of a bee on her forearm.

The bees are perhaps one of the most interesting parts of City Growers. “A lot of city kids are just kind of conditioned to believe that anything flying or stinging needs to be killed,” says Cara Chard, the executive director of City Growers. The organization is on a mission to change that. During the growing season, roughly late spring to mid-fall, City Growers hosts honeybee education field trips, right there on the roof, to teach kids about honeybees—and, in turn, where their food comes from.

The 90-minute field trips include letting kids see into an “observation hive,” which has been outfitted with a transparent wall, though the death of a queen this winter meant that wasn’t available during my visit. But they also include a honey tasting, lessons about the bee’s preferred flowers, the construction of “seed bursts” (balls made of compost, clay, and seeds of some of the honeybee’s favorite flowers, to be scattered around the city), and, of course, hefty question-and-answer sessions. My favorite: a sort of skit where three kids wear helmets (one bee and two flowers) and the bee “pollinates” the flowers with the help of some velcro.

The workshops are, says Epton, usually sold out, and they’re doing a lot of them: five days a week, two workshops a day, for the entire season. In fact, the hives have been so popular that City Growers is actively trying to find new sites; ideally, they’d like at least one in each borough. (For now, they have the Navy Yard in Brooklyn and another location in Long Island City, Queens). The biggest obstacle to expansion is simply finding locations: “There aren’t that many buildings that are comfortable with the idea of having kids on the roof,” says Chard. “And kids and bees…”

But the interest is there, and the kids love it—and, actually, aren’t nearly as scared of the bees as I thought they’d be. (Frankly, they were less skittish than I was.) Understanding pollination is a perfect base-level introduction to how agriculture works in general. Especially when it gets the kids out in the sunshine.

Head to citygrowers.com to get more information on booking a honeybee education workshop.

SI Center for Learning and Digital Access
Electronic field trip where curators from the National Museum of American History's America on the Move exhibit take students behind-the-scenes to show how they develop individual stories for exhibitions and provide guidance to students who want to create their own family stories by analyzing objects, documents, and other resources.

SI Center for Learning and Digital Access
Videos of electronic field trips to the museum providing viewers with a 20-minute tour by curators of the exhibit Separate is Not Equal: Brown v Board of Education, followed by a 30-minute videotaped question session about court decision and its legacy. One video targets middle schoolers; the other high schoolers.

Immigration, Migration, and How We Got There - Electronic Field Trip Part 1

SI Center for Learning and Digital Access
Video taking students on an electronic field trip to the Smithsonian's National Museum of American History. Curators take students through the America on the Move exhibit on transportation in U.S. history. Examine the impact of immigration and migration and the influence of various forms of transportation on American history.
1-24 of 7,943 Resources