The earth in past ages, by H.G. Seeley 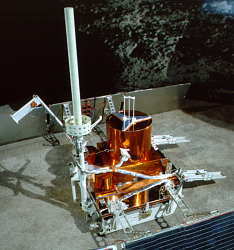 National Air and Space Museum
A device like this deployed on the lunar surface by the Apollo 11 crew in 1969 contained four seismometers powered by two panels of solar cells, which converted solar energy into electricity. The experiment measured lunar shock waves caused by moonquakes or impacts of meteoroids or of manmade objects on the surface. Data regarding the strength, duration, and approximate direction of the seismic event were relayed to receiving stations on Earth. The seismic instrument package continued sending data for about a month after the Apollo 11 landing. The seismic experiments left on the surface by the crews of Apollo 11 and four later Apollo missions continued to return valuable information even after the end of the Moon landings; the last one was shut off in 1981.

This unit was the Qualification Model for the unit deployed during the Apollo 11 mission. It was donated to the Museum by the Bendix Corporation in 1972. 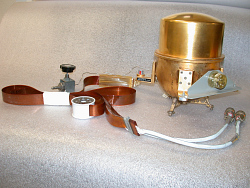 National Air and Space Museum
Instruments similar to this Passive Seismic Experiment Array were deployed as components of the Apollo Lunar Surface Experiment Packages (ALSEPs) deployed on Apollo 11, 12, 14, 15, and 16. This particular unit was built for Apollo 17, though it was not flown. The experiment was designed to detect vibrations on the lunar surface in the vertical and two horizontal directions. The seismometers were used to determine the structure of the moon's interior, the nature of meteoroid strikes, tidal shifts in the lunar surface, and changes in the moon's gravitational field. Like other ALSEP experiments, this experiment was powered by a Radioisotope Thermoelectric Generator (RTG).

This unit was stored by Bendix Aerospace until NASA transferred the object to the Smithsonian in 1982.

We can save frogs with science. Release trials in the wild begin this spring. On Earth Day weekend, the Smithsonian is convening the Earth Optimism […]

Everyone knows that the gravitational tugging of the moon makes earth’s oceans swell and recede. But did you know Earth’s tugging is causing the moon […]

Looking for another Earth? An international team of researchers has pinpointed which of the more than 4,000 exoplanets discovered by NASA’s Kepler mission are most […]

The global conservation movement has reached a turning point. We have documented the fast pace of habitat loss, the growing number of endangered and extinct […]

An Astronauts‚Äô View of Earth Could Change Us All

National Air and Space Museum
The "overview effect" profoundly changes the way space travelers view our planet. How can everyone experience it?

NASA Puts Earth Up for Adoption

The project is called Adopt the Planet and it’s an effort to help raise awareness for Earth science and environmental problems in celebration of Earth Day. NASA has divided the entire surface of the planet into 64,000 hexagonal pieces, each about 55 miles wide. Anyone who signs up for an adoption gets a randomly selected tile somewhere on Earth along with an adoption certificate and Earth science data that NASA scientists and collaborators have spent decades collecting.

The goal is to have every block adopted by Earth Day on April 22. And if all 64,000 blocks are adopted, NASA will go through the entire list again.

The project is not just a way to celebrate Earth Day, it’s also a chance for NASA to engage with the public about Earth science and get more people to take a close look at our home planet using their Worldview website. “NASA continually looks outward to find and learn about planets in our solar system and beyond, but no planet is better studied than the one we actually live on,” NASA says in the press release. “Our fleet of 18 Earth science missions in space, supported by aircraft, ships and ground observations, measure aspects of the environment that touch the lives of every person around the world.”

Worldview includes layers of data from each of those missions, including things like sea temperature, vegetation cover, cloud height, atmospheric dust, root zone soil moisture and dozens of other data sets.

In the last few years NASA has launched several Earth science missions, including the Global Precipitation Measurement Core Observatory, the Orbiting Carbon Observatory-2, which maps carbon dioxide concentrations, as well as instruments to measure ocean winds, measure soil moisture and a satellite to measure clouds and dust particles in the atmosphere. The most recent mission is the GOES-16 weather satellite which includes a nifty lighting tracker.

“We continue to be committed to studying our home planet,” Robert M. Lightfoot Jr., NASA’s acting administrator said in a recent address.“We’ll reshape our focus based on the resources available to us, and the budget, while it’s lower, is still in pretty good shape for us, for what we’re going to do in Earth science.”

SI Center for Learning and Digital Access
Interactive website exploring the dynamic forces that formed and are continually reforming the Earth and Solar System. Sections include gems and minerals, rocks and mining, plate tectonics and volcanoes, and the solar system.

Nearly four billion years ago, life arose on Earth. Life appeared because our planet had a rocky surface, liquid water, and a blanketing atmosphere. But […]

A 3-D rendering of the Apollo 11 Command Module with a view inside the hatch. The seats inside are where astronauts Neil Armstrong, Buzz Aldrin […]

We live in an age of satellites; the skies above are full of them, usually just beyond our sight. And while we benefit plenty from the information they provide and the technologies they make possible, my favorite satellite product has to be the imagery. Many people marvel at the Hubble pictures of deep space, but my preference is for the images of Earth and especially the ones in which our planet turns into an Impressionist’s dream.

For years, the USGS has collected many of its Landsat images into “Earth as Art” collections, and now many of them are being displayed in an exhibit at the Library of Congress; you can see some here on Smithsonian.com.

But now I (and tens of thousands of others) are enjoying another collection: the European Space Agency’s Flickr stream. I’ve highlighted eight of my favorites from the Earth from Space category in the gallery below. Which ones would you consider hanging as art in your home?

Image by ESA / NASA. An icy landscape in northern Canada almost looks like water, as seen from the International Space Station. (original image)

Image by ESA / NASA. Who lives on the side of Mount Vesuvius? Their lights can be seen on the side of the volcano, an otherwise dark spot in the middle of Naples at night. (original image)

Image by NASA. The ghostly green glow of the Aurora Australis, as seen from the International Space Station. (original image)

Image by ESA. Vegetation, false-colored in red, crawls up the side of the Himalayas and then abruptly stops. (original image)

Image by ESA. The color in this image, of the Tanezrouft Basin in the Algerian Sahara, comes from combining images from the Envisat satellite taken on three separate days; the colors represent differences in the images. (original image)

SI Center for Learning and Digital Access
Online exhibit looking at what we can learn about Earth from satellite imagery and how this technology is being applied. Includes guided questions about how satellite technology helps today.

According to the weekly report of the Smithsonian’s Global Volcanism Program, gas-and-ash plumes rose nearly one mile above the crater of Mexico’s Popocatépetl volcano from […]

Taking the Measure of Yellowstone’s Supervolcano

National Air and Space Museum
Still a threat, but don't cancel your vacation just yet.

Profound ideas don’t need to be complicated. A simple cube made of aluminum tubing, a centerpiece of a new exhibit “Life in One Cubic Foot,” […]

The Smithsonian’s history is right in line with Earth Optimism

The Smithsonian is celebrating Earth Day this month by hosting the first Earth Optimism Summit from April 21 to 23 in Washington, D.C. Its goal […]

The post The Smithsonian’s history is right in line with Earth Optimism appeared first on Smithsonian Insider.