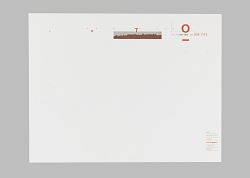 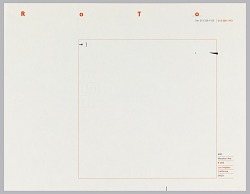 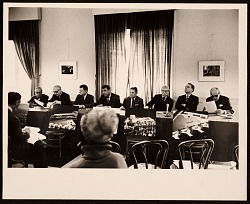 Architects for the Interama project 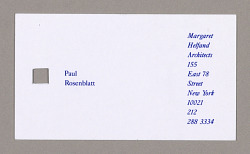 Letterhead - White tinted pale green on the recto and turquoise on the verso, the paper is imprinted Margaret/ Helfand/ Architects on the upper left; eight lines of type, comprising the address and telephone number, are imprinted on the lower left. A small incised square, aligned with these two groups of type, is centered at the left.

Envelope - The envelope color scheme is pale gray on the exterior and salmon colored on the interior. The incised square design of the letterhead is repeated on the verso, left; on the recto, it of course shows on the right, just below the flap. Margaret/ Helfand/ Architects, followed underneath by the address on five lines, are imprinted on the flap immediately above the square. When the letterhead is folded in thirds and inserted in the envelope, the turquoise paper is visible through the envelope's square.

Mailing label - The design is a variation of that on the letterhead. On the top left of the chartreuse rectangle, Margaret/ Helfand/ Architects is imprinted; the address and telephone number, identical to the letterhead except for NY, follow immediately underneath.

Business card - Next to an incised square, which is centered close to the left edge,

Paul/ Rosenblatt is imprinted. On the right, imprinted in italicized type, and occupying the full length of the card, are Margaret/ Helfand/ Architects, followed by the address and telephone number on seven lines, 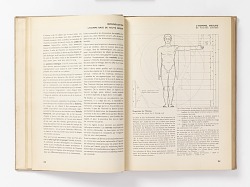 It's true that Detroit is in a grim state of deterioration. As much as 20 percent of the city’s 139 square miles are now vacant.

But that also makes it a community ripe to be reimagined.

That potential to help rejuvenate a major American city is at the heart of a thought-provoking exhibition unveiled late last month in Venice, Italy at the 2016 Architecture Biennale, an event that showcases innovative architecture from around the world. The show, sponsored by the U.S. State Department, organized by the University of Michigan and titled “The Architectural Imagination,” focuses on new looks and purposes for four different sites in Detroit.

“Detroit is a city on the brink of a new future and we felt architecture should be part of the conversation,” says Cynthia Davidson, executive director of the New York nonprofit Anyone Corporation and editor of the architecture journal Log, who along with Monica Ponce de Leon, dean of the Princeton University School of Architecture, curated the exhibition.

Together they formed an advisory board that included city officials and people involved with a number of Detroit-area nonprofits, and asked it to recommend sites whose makeover could have a real impact. From the original list of 20 suggested sites, Davidson and Ponce de Leon trimmed it down to four. They then selected 12 different teams of architects from the around the U.S. and assigned three of them to each of the four locations.

One is the site of a huge dilapidated plant on the city’s east side where the Packard Motor Company once built luxury cars. Another is a large, triangular lot next to a rail line, but also adjacent to a burgeoning immigrant neighborhood known as Mexicantown. Then there's a site near what's known as the Dequindre Cut, where a railway line once ran along the Detroit River. The final challenge was to rethink a 10-story mail-sorting facility that blocks a neighborhood called Corktown from the riverfront.

Each team was instructed to come up with a clear purpose for a site, and only then create a design for how the land or the remains of any buildings would be transformed.

“We also asked them to try not to demolish anything, because there’s already been enough demolition in Detroit,” says Davidson. She pointed out that while the projects are all based in Detroit, the problems they attempt to address plague many cities that have lost much of their industrial cores. One of the exhibition’s goals, she says, is to foster ideas that could be applied far beyond Detroit.

She and Ponce de Leon believed that Detroit was a particularly appropriate choice, not just because of its current problems, but also because of the city’s past as the place that, as much as any, helped shape how America looks, a country that was largely designed in response to the automobile.

For all the exhibition’s visions, it’s certainly possible that none of these designs will ever come to fruition. “The Architectural Imagination” is less about designing actual buildings than it is about fashioning inventive ideas that can help people start to think differently about where they live.

“We are all for fixing leaking roofs and broken sidewalks,” says Davidson, “but that’s not everything. How can we raise the status quo for not just one neighborhood, but the city as a whole. Can architecture do that? We think it can be a catalyst.”

“The Architectural Imagination” will remain on display in Venice until November, then it will move on to the Museum of Contemporary Art Detroit in February. 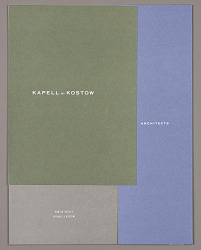 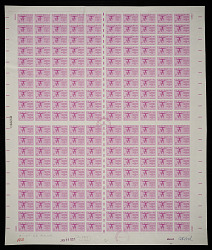 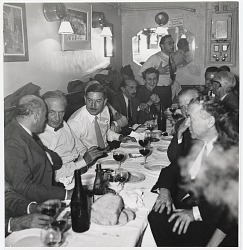 Architects in a Parisian cafe

Walter Gropius, second from the left; Marcel Breuer, right foreground; Le Corbusier, background on the right with head turned away. 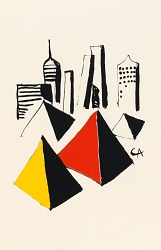 The Boston Society of Architects 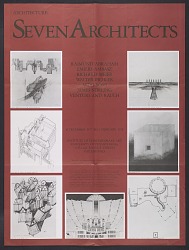 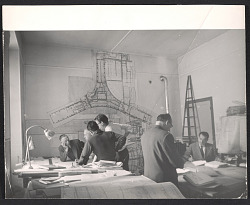 Architects' office at the UNESCO headquarters building in Paris 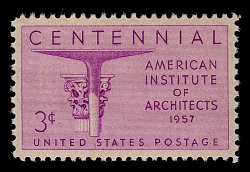 National Postal Museum
This Architects Issue stamp commemorates the 100th anniversary of the founding of the American Institute of Architects. The professional organization was founded in New York City in 1857 by a group of architects. The American Institute of Architects performs government advocacy, community redevelopment, and public outreach to support the architecture profession and improve its public image. The stamp depicts a column with a Corinthian capital and a mushroom type head and shaft.

What is Design? MOS Architects Answer 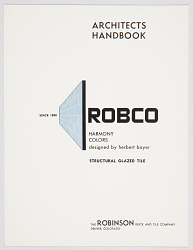 You can tell a lot about a country by looking at its money. The national figures, iconography and cultural institutions depicted on national currency, as well as its general design, are expressions of a country's values and heritage. Artist and designer Alphonse Mucha realized this when, in the wake of World War I, he designed banknotes for his native Czechoslovakia using distinctive organic forms rooted in local traditions. Consider also banknotes in the United States: the depictions of founding fathers and Neoclassical capital architecture alongside various symbols, signatures, and seals are, depending on your perspective, either celebrations of history and tradition or stubborn reminders of outmoded or lost ideals.

U.S. currency has evolved over time, but changes have been made for purposes of security, while aesthetic, accessibility, and cultural consideration seem to have been largely ignored. Norway, meanwhile, have changed their banknotes eight times since 1875, and the recently announced Series VIII notes are strikingly different from any previous versions.

Norges Bank, the central bank of Norway, decided to redesign the country’s currency to combat increasingly sophisticated counterfeiters and while the bank itself will of course oversee the bills’ new security features, it launched a competition last spring to find a new artistic motif for the bills. The mandated theme was “The Sea,” in honor of “its importance for Norway's business sector and economic prosperity.” From the 70 submitted proposals, a jury made up of artists, historians, and bank executives selected two very different winning entries to give each new notes a duality of both traditional and modern expression.

On the obverse, or "front," face, the Oslo-based graphic design firm The Metric System with Terje Tønnessen, created a a “typically Nordic” design that was found to be “very well suited to the incorporation of necessary security elements." A pixelated proposal by Norwegian architecture firm Snøhetta’s will be adopted for the reverse face.

In its selection, the jury considered representation of Norwegian culture, integration of security measures, good interrelationships among denominations, and the prominence high-contrast colors that make each bill easily distinguishable to the visually impaired (a long overdue feature in U.S. bills, which are embarrassingly similar to one another). While the Metric System Proposal scored very highly in all respects, it was seen as a little too traditional, and the bank intends to make changes to the design to “dampen the idyllic expression.”

Snøhetta’s original proposal, dubbed “The Beauty of Boundaries,” is an abstraction of the country’s coastline, represented through a pixel mosaic--“our times’ visual language,” note the architects--that change with each denomination, stretching with larger bills in accordance to the Beaufort scale, which measures wind speed according to an estimation of the wind’s effects.

Snøhetta, as architects are wont to do, describe their proposal at greater length:

The pattern and the abstracted motives create a horizon. The horizon is perhaps the most used dramaturgy for expressing border crossings. The nuances are tied together by the horizon and overlapping in the pattern. Just as our cost, the different banknotes are connected. We have chosen black and white photos to enhance the colors of the cubical pattern, as well as to complement the Norwegian style and tone. The pictures contrast the rational system, and have motives with both direct and indirect storytelling. Our goal is to bring people into creating their own interpretations and associations. You will never know exactly what or how, but the design invites you into the beauty of boundaries – the transition between digital and analog, soft and hard – a dynamic that creates tension and life; just as the boundaries of our coast.

Notably, the Series VIII banknotes will be the country’s first series that doesn’t feature a portrait of a significant cultural figure. Instead, “The Sea” was selected as the theme to explore a wide range creative possibilities while creating a visually cohesive system of banknotes. While from a design perspective, it doesn’t seem ideal to Frankenstein together two completely disparate concepts, the two designs are united by the maritime theme and, together, manage to create something unique, a type of liminal condition uniting past and present where, as Snøhetta says, “something meaningful and interesting happens.” Over the next few years, the designs will be adapted by the bank to accommodate new security elements that will make the notes counterfeit-proof - at least for now. Norges Bank expects the notes to be in wallets by 2017 and to have a circulation of 15 years - during which time new counterfeit measures will be developed and then the cycle will begin again.

National Museum of African American History and Culture
Brochure for Freelon/Bond Architects. The rectangular brochure has text and images on both sides. The front has black-and-white images of Philip Freelon and J. Max Bond, Jr. Below the images red and black text reads [Freelon/Bond An association of Davis Brody Bond and the Freelon Group]. The left side of the cardstock has [FREELON / BOND / Architects] within a design of red rectangles. The reverse of the card is titled in red [Freelon/Bond / Pursuing an American Dream]. There are five (5) images of building interiors and exteriors. Black text below reads [An historic opportunity - the planning and design for the new National Museum of African American History and Culture (NMAAHC) - is finally in sight. We are pleased to announce the teaming of our two architecture firms, The Freelon Group and Davis Brody Bond, in a joint affiliation to pursue the NMAAHC design commission]. Text on the right side begins [The collective strengths of this historic collaboration include:]. Signatures for J. Max Bond and Philip Freelon are at the bottom. 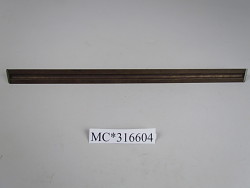 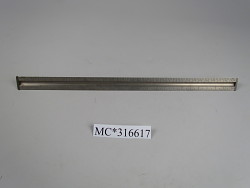