While fidget spinners are the latest trend in handheld amusements, spinning phenakistiscope discs such as the example shown here charmed 19th-century audiences. These discs were the first widespread devices that created an illusion of fluid motion. Before cinematography, adults and children alike were captivated by objects that combined art and optical illusion, and much of... 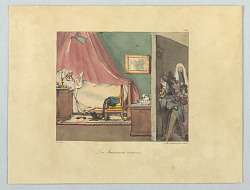 Cooper Hewitt, Smithsonian Design Museum
Man in nightcap in bed, left, reading. Over his head, a pitcher of water, controlled by a string through the door into the hall. Four people watch and wait, with a head on a stick. Title and artists' names below. 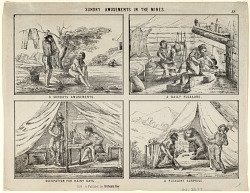 Sundry Amusements in the Mines

National Museum of American History
Black and white print depicting four mining scenes. "A Sundays Amusement" shows two miners washing clothes in a stream, "A Daily Plesasure" shows two miners cooking in their cabin, and two additional views with titles torn off show the miners sewing and fighting off a bear. This is an unused folded letter sheet with the image on its first page.

Amusements of Foreigners at Yokohama 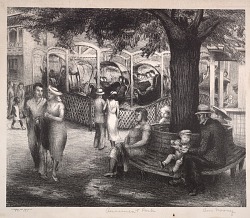 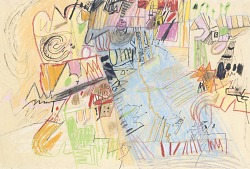 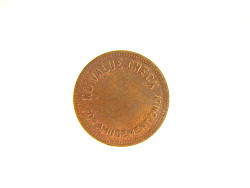 National Museum of American History
The Scovill Manufacturing Company of Waterbury, Connecticut produced this token during the late 19th century. The Scovill Company was established in 1802 as a button manufacturer and is still in business today. Scovill was an early industrial American innovator, adapting armory manufacturing processes to mass-produce a variety of consumer goods including buttons, daguerreotype mats, medals, coins, and transportation tokens.

Obverse: The legend reads: NO VALUE CHECK/FOR AMUSEMENT ONLY. 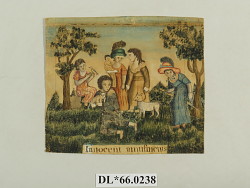 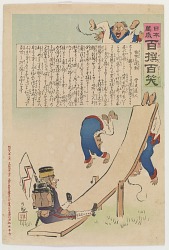 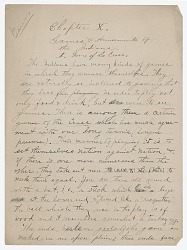 Extract from "Games and Amusements of the Indians- Chapter X. Game of La Cross"

Is this X of his Historical Manuscript ? 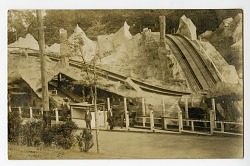 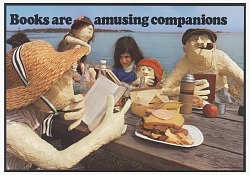 Cooper Hewitt, Smithsonian Design Museum
Photograph of a group of figures: one girl and a “family” of plaster figures all reading at a picnic table with lunch. Above in black: Books are amusing companions. 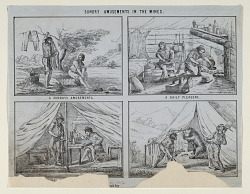 Sundry Amusement in the Mines

National Museum of American History
Black and white print on blue paper depicting four mining scenes. "A Sundays Amusement" shows two miners washing clothes in a stream, "A Daily Plesasure" shows two miners cooking in their cabin, and two additional views with titles torn off show the miners sewing and fighting off a bear. This is an unused folded letter sheet with the image on its first page.

Why This Ship Is Called a Floating Amusement Park

Smithsonian Channel
For passengers looking for on-board entertainment, the Carnival Vista has no shortage of options: from a mini-golf course, to two swimming pools, to a state-of-the-art 'SkyRide' suspended 150 feet above the sea. From the show Mighty Cruise Ships: http://bit.ly/2hIIoep 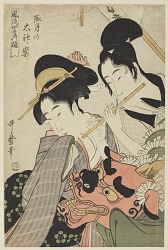 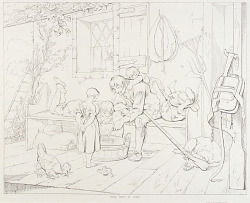 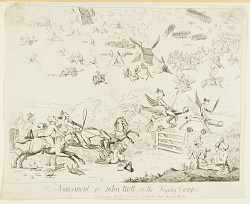 Amusement for John Bull or the Flying Camp

National Air and Space Museum
Uncolored etching of a caricature featuring George III and the Queen. Outdoor scene of soldiers riding flying cannons with wings as soldiers on horseback look on in stunned amazement. Sky contains the flying camp with more winged cannons and tents.

An amusement resort at the seashore 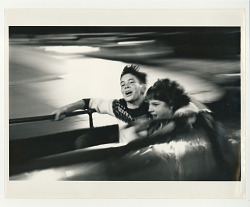 boy and a girl on a fast ride at amusement park 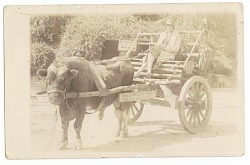 National Museum of African American History and Culture
A black-and-white real photograph postcard of a woman sitting in an ox cart at McLeod's Amusement Park, also known as Happy Hollow, in Hot Springs, Arkansas. The woman is wearing a dress, overcoat, cloche hat, hosiery and heels. The cart is made out of logs and planks. The woman is holding the reins to the ox, although the ox appears to be chained in place and is not moving. There is a sign on the cart that reads [TRAVELING - THRU - ARK./ ON - THE - WAY - HOME.] There is a license plate on the proper left side of the wagon, above the wheel, that is partially legible. In the background is a structure overtaken by vines with some partially legible signs, including: [HOTEL - INN/ HOT SPRINGS/ HAPPY HOLLOW] and [OUR SUMMER HOME].

The optical lantern, for instruction and amusement. By Andrew Pringle ..

It’s the 1830s and you’re in need of the most luxurious amusement in Manhattan. Naturally, you grab your bonnet and parasol and head to…Battery Park? Yes, that Battery Park. In the early part of the 19th century, it was home to a place called Castle Garden, which served as one of America’s most popular amusement parks until it became the precursor to Ellis Island.

The castle-like fort at the tip of the Battery wasn’t always a pleasure ground. Rather, it originated during a time of war. In 1808, foreseeing the danger of British invasion, New Yorkers started to build a series of forts to defend the harbor. Southwest Battery, as it was called, was built on a manmade island right off the shore of the southern tip of Manhattan. It was outfitted with 28 cannons and military fortifications.

Though the British did end up invading the United States during the War of 1812, laying waste to Washington, D.C., they never attacked New York. After the war, the fort was decommissioned and the Battery was filled in with city garbage to make it part of Manhattan. The government leased Castle Clinton, as the fort was known, to New York City, which renamed it Castle Garden and turned it into an amusement park.

Roller coasters and cartoon characters weren’t yet part of the definition of “amusement park,” but that didn’t bother fashionable New Yorkers. They flocked to Castle Garden for harbor views, a meal at its huge restaurant, and perhaps an opera or a fireworks show. “The illuminations, bands of music, and multitudes of people,” wrote one observer, “give it the appearance of an enchanted castle. The sea breeze, with delicious coolness, breathes its freshness from the bay. Refreshments of every kind are to be obtained at moderate cost; nor must a favourite American beverage called mint julep, a sort of punch, pass unnoticed in the catalogue of the delicacies, with which the place abounds.”

Castle Garden got fancier and more popular as the years went by. Its opera house became world-famous in 1850, when P.T. Barnum presented opera sensation Jenny Lind, the "Swedish Nightingale" there. Her American debut attracted 5,000 spectators and made her an instant hit. The park also hosted exhibitions of the latest in science and technology, like a demonstration of an underwater electronic explosive and the newfangled telegraph. Or, you could simply chill in the park’s saltwater baths for the “invigorating experience of…pure, renovating ocean-brine.”

But big changes were afoot in the United States, and the lazy days of Castle Garden ended in 1855. So many immigrants had been pouring into New York through its docks that the city needed a central processing location, so it repurposed Castle Garden and turned it into the Emigrant Landing Depot. It was New York’s first immigration center, and soon tens of thousands of people were pouring through its gates. Each immigrant was given a health examination, registered and given water for bathing before being released into the city with information about his or her final destination.

All in all, over 8 million immigrants passed through Castle Garden—two out of every three immigrants who entered the U.S. between 1855 and 1890, when Ellis Island was opened. The scene inside was so chaotic that it even sparked its own word: Kesselgarden, a Yiddish word that refers to a confusing, noisy situation and that emerged from Eastern European immigrants’ pronunciation of the name of the center.

Today, you can still catch a glimpse of Castle Garden in Battery Park—just look for the castle-like stone fortifications. The site is a national monument and you can search for the names of ships and immigrants who passed through Castle Garden on its website. It may be less known than Ellis Island, but the site was just as important to the millions of immigrants—and pleasure seekers—who passed through its gates. 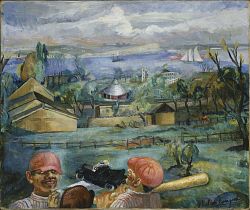