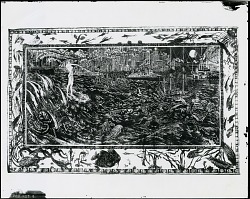 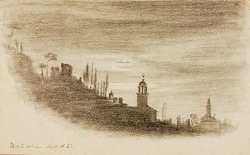 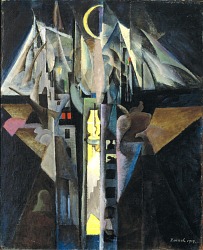 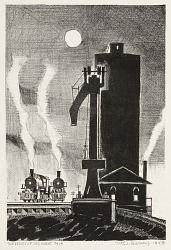 The Beauty of the Night 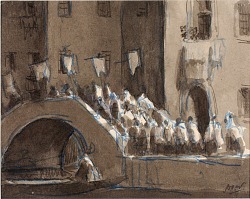 Procession in the Venitian Night 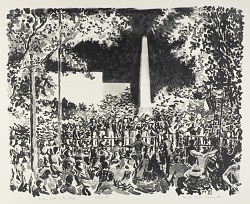 Sunday Night in the Plaza 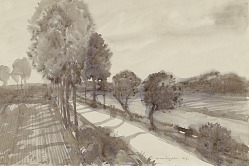 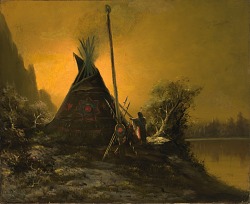 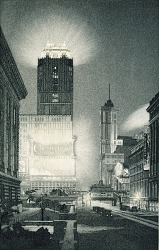 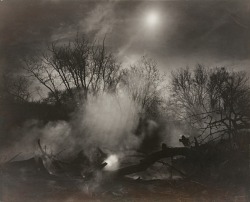 Night Scene, "Ah! when shall all men's good Be each man's rule, and universal Peace Lie like a shaft of light across the land...") --Alfred Lord Tennyson, "The Golden Year," 1842. From the series Great Ideas of Western Man. 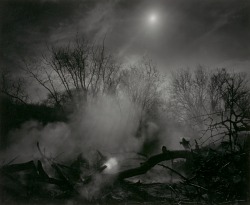 Night Scene, "Ah! when shall all men's good Be each man's rule, and universal Peace Lie like a shaft of light across the land...") --Alfred Lord Tennyson, "The Golden Year," 1842. From the series Great Ideas. 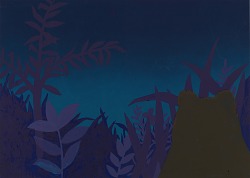 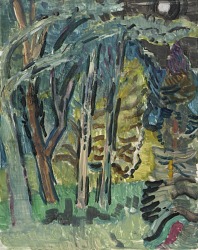 Night Woods with Touch of Moonlight 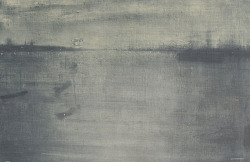 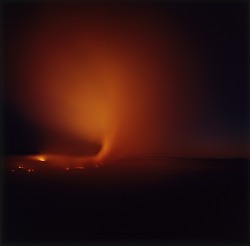 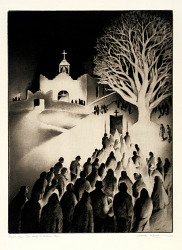 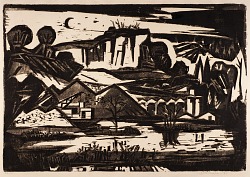 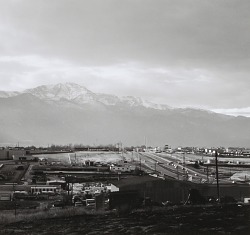 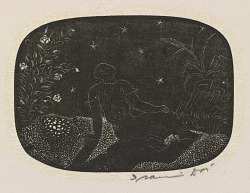 (The Wayward Muse, portfolio) Here Beneath the Canopy of Stars I Shall Sleep a Thousand Years of Dreamless Nights 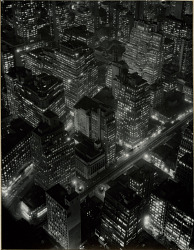 National Museum of American History
Unmounted silver print by Berenice Abbott, "Night Aerial View, Midtown Manhattan." Aerial view of city at night, emphasis on crisscrossing diagonal lines in composition. Buildings in bottom left create subtly darker area than the rest of print. Circles of distorted light and tone along top edge and bottom middle center; railroad tracks run from right edge middle to bottom left corner. Distorted circles of light in bottom middle center of photo may be the whirling lights of police cars. Verso: Print: Stamp, "Photograph, Berenice Abbott, Maine 04406;" Mount: Handwritten by Abbott, "Aerial Night Shot, 19." During the 1920s, Berenice Abbott was one of the premier portrait photographers of Paris, her only competitor was the equally well-known Dada Surrealist Man Ray who had served as her mentor and employer before she launched her own career. An American expatriate, Abbott enjoyed the company of some of the great twentieth century writers and artists, photographing individuals such as Jean Cocteau, Peggy Guggenheim and James Joyce. One of the critical elements of Abbott’s portraiture was a desire to neither enhance nor interfere with the sitter. She instead wished to allow the personality of her subject to dictate the form of the photograph, and would often sit with her clients for several hours before she even began to photograph them. This straight-forward approach to photography characterized Abbott’s work for the duration of her career. Thematically and technically, Abbott’s work can be most closely linked to documentary photographer Eugène Atget (COLL.PHOTOS.000016), who photographed Paris during the early 1900s. Abbott bought a number of his prints the first time she saw them, and even asked him to set some aside that she planned to purchase when she had enough money. After his death in 1927, Abbott took it upon herself to publicize Atget’s work to garner the recognition it deserved. It was partly for this reason she returned to the United States in 1928, hoping to find an American publisher to produce an English-language survey of Atget’s work. Amazed upon her arrival to see the changes New York had undergone during her stay in Paris, and eager to photograph the emerging new metropolis, Abbott decided to pack up her lucrative Parisian portrait business and move back to New York. The status and prestige she enjoyed in Paris, however, did not carry over to New York. Abbott did not fit in easily with her contemporaries. She was both a woman in a male-dominated field and a documentary photographer in the midst of an American photographic world firmly rooted in Pictorialism. Abbott recalls disliking the work of both photographer Alfred Stieglitz and his then protégé Paul Strand when she first visited their exhibitions in New York. Stieglitz, along with contemporaries such as Ansel Adams and Edward Steichen, tended to romanticize the American landscape and effectively dismissed Abbott’s straight photography as she saw it. Not only was Atget’s work rejected by the Pictorialists, but a series of critical comments she made towards Stieglitz and Pictorialism cost Abbott her professional career as a photographer. Afterwards, she was unable to secure space at galleries, have her work shown at museums or continue the working relationships she had forged with a number of magazine publications. In 1935, the Federal Art Project outfitted Abbott with equipment and a staff to complete her project to photograph New York City. The benefit of a personal staff and the freedom to determine her own subject matter was unique among federally funded artists working at that time. The resulting series of photographs, which she titled Changing New York, represent some of Abbott’s best-known work. Her photographs of New York remain one of the most important twentieth century pictorial records of New York City. Abbott went on to produce a series of photographs for varied topics, including scientific textbooks and American suburbs. When the equipment was insufficient to meet her photographic needs, as in the case of her series of science photographs, she invented the tools she needed to achieve the desired effect. In the course of doing so, Abbott patented a number of useful photographic aids throughout her career including an 8x10 patent camera (patent #2869556) and a photographer’s jacket. Abbott also spent twenty years teaching photography classes at the New School for Social Research alongside such greats as composer Aaron Copland and writer W.E.B. DuBois. Perhaps the most intriguing aspect of Abbott’s career was the printing of Eugène Atget’s photographs, one of the few instances in which one well-known photographer printed a large number of negatives made by another well-known photographer. The struggle to get Atget’s photographs the recognition they deserved was similar to Abbott’s efforts to chart her own path by bringing documentary photography to the fore in a Pictorialist dominated America. Though she experienced varying levels of rejection and trials in both efforts, her perseverance placed her in the position she now holds as one of the great photographers of the twentieth century. The Bernice Abbott collection consists of sixteen silver prints. The photographs represent a range of work Abbott produced during her lifetime, including her early portraiture work in Paris, her Changing New York series, Physics and Route 1, U.S.A. series. 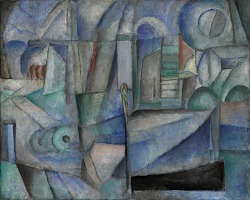 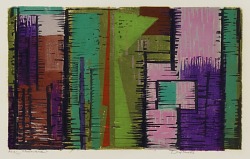 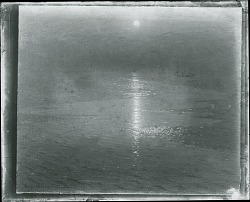 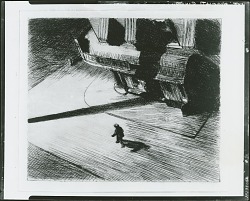