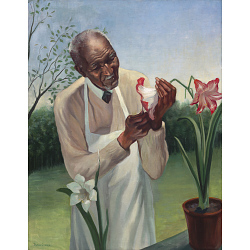 In this collection, we look at portraiture through the lens of the 30 second look strategy. This looking strategy allows participants 30 seconds to look at a portrait, and then turn away from the portrait and have a conversation about what they saw. This activity challenges participants to first look on their own and then have a collaborative conversation with their peers.

Visually rich portraits, with both objects and setting, are most effective when using this strategy.

The 30 Seconds lesson helps students to use their visual and memorizing skills. The lessons will sentence starters like "I think and I know" to introduce fact and opinion, which will encourage creativity.

The activity can also help to exercises their....

The activity can be done as a whole group discussion, partner work, or independently. I will use the Kagan strategy Rally Coach on the second portrait with the purpose of building their language skills and taking ownership of their learning. Students will work with a peer what they saw during the 30 seconds of looking at the portrait. Then, they will share in their opinion what they think is happening in the setting and what is the person in the portrait doing and thinking.

This collection was created in conjunction with the National Portrait Gallery, as well as resource and information. 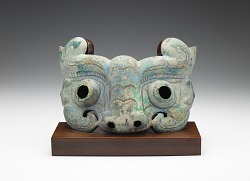 Allow small groups to "look/think/wonder" about a mask image:  Look and describe what you see. Based on what you see, what do you think the mask is for? What do you wonder about the mask (or want to learn about the mask)? Then allow students to click the Information button to learn more. Groups can report out to the whole class.

Facilitate a discussion with students using some open ended questions:

Direct students to sketch their ideas to plan for creating a mask.

Journey of the Vin Fiz

The Vin Fiz was the first aeroplane to cross the United States from coast to coast. At a maximum speed of 51 mph and many in flight set backs, the Vin Fiz made the crossing in over 84 days. 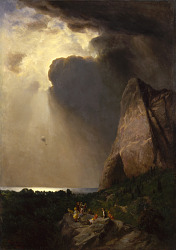 According to the Poetry Foundation, "An ekphrastic poem is a vivid description of a scene or, more commonly, a work of art. Through the imaginative act of narrating and reflecting on the "action" of a painting or sculpture, the poet may amplify and expand its meaning"

This collection is based on a lesson plan from the Smithsonian American Art Museum, which guides users through the process of using artwork to inform and inspire poetry. Strategies for developing original poems, sample ekphrastic (art-inspired) poems, and suggested artworks are included to stimulate thinking.

Creative Questions about the Great Wall

This collection highlights the Creative Questioning thinking routine from Project Zero. Students will watch a video clip about the Great Wall of China and generate questions they have about the topic. Then, they will use the question starters to improve and expand upon their questions. Finally, they will choose one of their questions as the starting point for further research. 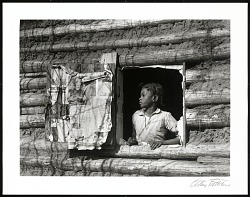 Developing an inquiry-based strategy to support students can allow them to investigate objects and images as historians do. In this example, students try to reveal the story behind the image. They raise questions for their own further research. Because the image has only a title, the photographer's name, the "sitter"'s name, the place and the date, students have to rely on their own analysis of evidence in the image, rather than someone else's interpretation. When they read the expert's analysis, they will have already considered many of the elements that the expert highlights and can compare their interpretations.

"Girl at Gee's Bend, Alabama" is a provocative photograph that can be used in discussions ranging from history of the South during the Great Depression, to social justice. 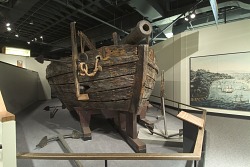 Through photographs, text, videos, interviews, a map & a 3D model, students can explore the history of the oldest surviving American naval vessel, the Gunboat Philadelphia, which is in the permanent collections of the Smithsonian's National Museum of American History. The Philadelphia (1776) played an important role during the Revolutionary War. The first five resources in this collection show the discovery and preservation of the sunken boat, while the last three offer more information on its historical significance.

This could be used by students to consider what each type of media reveals. What information can you learn from the single resource? From the collection of media combined? What more context is needed? 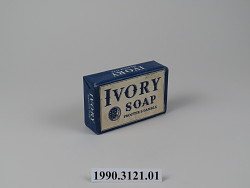 This teaching collection and student activity includes the resources necessary to teach an EDSITEment lesson on the Ramayana where students read closely to find examples of the Hindu concept of dharma.

Benjamin West began painting in America during the late colonial period. His works represented a variety of styles. He was equally good at portraiture which was what most customers wanted and romantic renditions of battle scenes. Later in his career he devoted much of his time to Greek and Roman mythological themes. 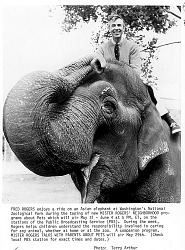 Mr. Rogers is quoted as saying, “When I was a boy and I would see scary things in the news, my mother would say to me, "Look for the helpers. You will always find people who are helping." This collection will give students a framework to "look for the helpers"--the people who are trying to change society for the better during difficult times. Students will be introduced to a variety of strategies and tactics used in social movements, and consider how these might apply to an area of their own interest.

Included is a chart listing possible strategies for social movements that encourages students to find examples of tactics/strategies from the collection and determine the goals of each.

Opportunities for extension include:

Identify a social movement that relies on more than one strategy (most do). Can you create a "recipe" listing the various tactics used to create a successful movement?

Who is involved? Choose one of the examples from above to study further. Who was involved in that particular tactic or strategy? Consider different occupations (teacher, writer, church leader, student, mother) and also different demographics (gender, race, age, ethnicity, etc.)

What's missing? Are there strategies that you have encountered in your research that don't fit into this chart? 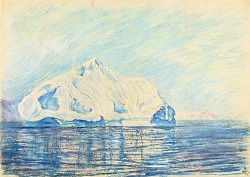 What can we learn about global climate change by examining icebergs? This teaching collection provides resources to support a lesson on climate change and polar ice melt. It includes a video, link to a lesson plan and photo essay from the Global Oneness Project, images, and a Smithsonian article. 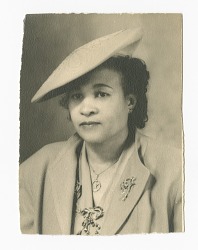 Who is Frances Mary Albrier?

This is a collection of items belonging to, or about, Frances M. Albrier. Although an important female leader and activist during the mid-20th century, many students may not have heard of Ms. Albrier. Encourage students to act as history detectives, exploring the collection to determine why this woman's belongings are in the collections of the Smithsonian.

Some questions to consider:

In preparing to paint his large-scale mural, Manifest Destiny, a commission for the Brooklyn Museum's re-opening in 2004, Alexis Rockman consulted with climate change experts to imagine what Brooklyn might look like several centuries in the future when the glaciers have melted and sea levels have risen.

Teachers can use this painting as a starting point to discussing the issue of climate change, understanding what's at risk, and exploring mitigation strategies coastal cities might take to prevent an outcome like the one Rockman predicts. 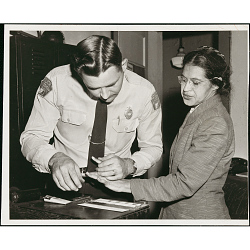 Using Portraiture to Teach the Struggle for Justice

This collection supports the January 2017 Google Hangout facilitated by the National Portrait Gallery in coordination with the Smithsonian Center for Learning and Digital Access. 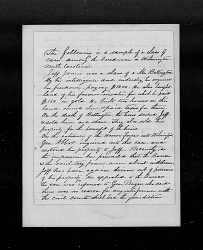 Reconstruction in the American South #TeachingInquiry 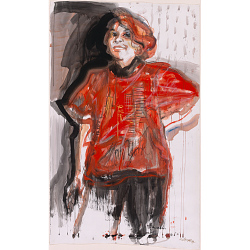 This topical collection explores Antonio Martorell's portrait of prolific Latina author Nicholasa Mohr, and is displayed with a range of resources that offer a view, through art, portraiture, and literature, into the lives of Puerto Rican migrants to the continental United States in the early to mid-twentieth century. The images and resources can be used as discussion or writing prompts in a variety of courses, including history, culture, literature, and language.

The portrait itself,  one of a series of 45-minute portraits that Martorell made of his artist friends, captures Mohr's spirit, much in the way that Mohr's writing brings to life the people, sounds, and activities of New York's Puerto Rican migrants in the twentieth century. The collection also includes a bilingual video with National Portrait Gallery curator Taína Caragol, as well as the first page and a review of "Nilda," one of Mohr's most well-known novels, about a Puerto Rican girl coming of age in New York during World War II. This book was selected as an "Outstanding Book of the Year" by the New York Times, and a "Best Book of 1973" by the American Library Association.

The collection includes images and a bilingual podcast by Martorell speaking about a different work in the Smithsonian American Art Museum collection, "La Playa Negra" ("Tar Beach"), which is the term used by Puerto Rican migrants for the rooftops of tenement buildings. As the label describes, in this painting, "a fashionable woman wears a fur-collared coat and sits in front of a New York City skyline. Her hardworking double on the left sits behind a sewing machine. In his "Playa Negra" ("Tar Beach") series, Martorell juxtaposed migrants' prosperous self-image with a glimpse of their tiring labor."

The collection also includes a series of photographs from the collection of the Smithsonian American Art Museum, by Hiram Maristany, a resident and photographer of the El Barrio neighborhood. Maristany grew up with eight siblings on East 111th Street. In addition, the collection includes links from PBS Learning Media on Puerto Rican history and migration. 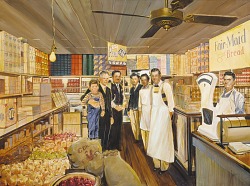 This collection contains resources – photographs, paintings, objects, documents, and more – representing familial ideas and themes that a student could be proud of. This collection is part of an activity for Tween Tribune tied to a student reading of the article For Nearly 150 Years, This One House Told a Novel Story About the African-American Experience. A lesson plan is included in "Notes to Other Users," click on the (i) tab in the upper-right to learn more. 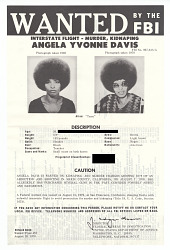 Long before the camera went west, artists like George Catlin were preserving the images of the native Americans on the western plains. Catlin's paintings are numerous and divide into two genre: the group activities and portraiture. This learning lab focuses on group activities of many plains indians including hunting, traditional dances, and recreation.

During the 1830s, George Catlin and his team produced over five hundred images of native American life on the western plains. Nearly half of his work consisted of exquisite portraits of Indians of many different tribes. Some tribes like the Hidatsa disappeared before any other visual representation of them could be made. 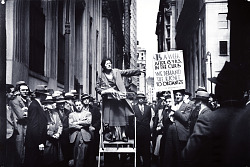 Aspects of the New Deal

Each item in this collection matches a part of the New Deal. Students must justify their answer using evidence in the image.

The early years in Virginia's first colony were fraught with starvation and illness. Many of the Jamestown colonists were not "survivors". Most were gentlemen searching for gold and riches and had no experience living in the wilderness. America was a challenge: the forest primeval had never been cut, there was no available farmland, few had experience at fishing or hunting and gathering. Our story about tells about the ultimate in desperation. 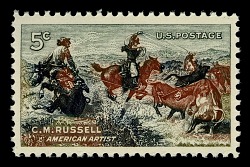 Charles Russell brought the west alive with his paintings and sculptures of western life. His authentic depictions of Native Americans allow the viewer to appreciate the dress and life of the plains Indians. Also skilled in sculpture, Russell depicts cowboys and wildlife in action settings. This lab provides samples of Russell's best work.