Lemur Extinctions Are Harmful to Madagascar's Plant Life, Too

The human-driven extinction of fruit-eating lemurs on Madagascar has created multiple "orphan" plant species with precarious futures because their primary seed dispersers are gone, scientists say.

The findings, detailed in this week's issue of the journal of the Proceedings of the National Academy of Sciences, could have implications for conservation efforts not only in Madagascar, but around the world.

Among the world’s most unique primates, lemurs play a vital role in Madagascar as seed dispersers for many plants and are essential for maintaining healthy and diverse forests on the island.  Fruits make up a large part of many lemurs' diets, and the animals will often ingest whole seeds and then poop them out far from the parent tree, thus helping the plants spread.

"In other tropical areas, the primary seed dispersers are birds, but in Madagascar, that's not the case," says study first-author Sarah Federman, a graduate student at Yale University. "The burden of seed dispersal falls mainly on lemurs, of which there are very few."

The researchers examined lemur features, like the skull of this mouse lemur, to identify what seeds the primates may have had a role in dispersing. (Courtesy Sarah Federman)

That number is dwindling even further. Scientists estimate that in the past few thousand years, at least 17 lemur species on Madagascar have been driven to extinction by human activity, through either direct hunting or loss of habitat.

To investigate how these extinctions have affected Madagascar's forests, Federman and her team matched the diets of extinct lemurs with the seeds of plants on the island, including some plant species that scientists suspected were “orphans”--plants that did not have any existing animal seed dispersers.

To infer whether the extinct lemurs were capable of eating and dispersing the seeds, the group analyzed the animals' gape sizes–how wide their jaws could open–as well as other clues, such as their tooth shapes and dental wear.

The scientists concluded that many of the extinct lemur species they examined had once indeed been seed dispersers. Furthermore, one large extinct lemur in particular, called Pachylemur, was likely the primary disperser for a group of orphan plants on the island called Canarium. More than 30 Canarium tree species are found on Madagascar, and the largest of these have seeds that resemble large olives and are too big for Madagascar's existing lemurs to eat.

Bereft of their main seed dispersers, today's Canariums must rely on less-effective secondary dispersers such as strong winds and rodents to spread their seeds, but their days could be numbered, Federman and her team concluded.

Mauro Galetti, an ecologist at Paulo State University in Brazil, says the new findings foreshadow what could happen in many other regions, such as continental Africa, Asia and South America, as large fruit-eating animals such as elephants, gorillas, and rhinos are driven to extinction.

"More and more we find evidence for the importance of large frugivores [(fruit-eaters)]to our planet," says Galetti, who was not involved in the study.

Federman says her group's findings have practical and even philosophical ramifications for species conservation.

"Traditionally, conservation tended to be species-specific ... but now people are moving toward more ecosystem-level projects because we’ve realized that you can't protect a species in a vacuum," she says. "Our analysis facilitates thinking about how Madagascar’s lemurs fit into their ecosystems, but it also raises the question of what do you do with a tree that can no longer disperse its seeds. Do we intervene? Or do we just let it go extinct?" 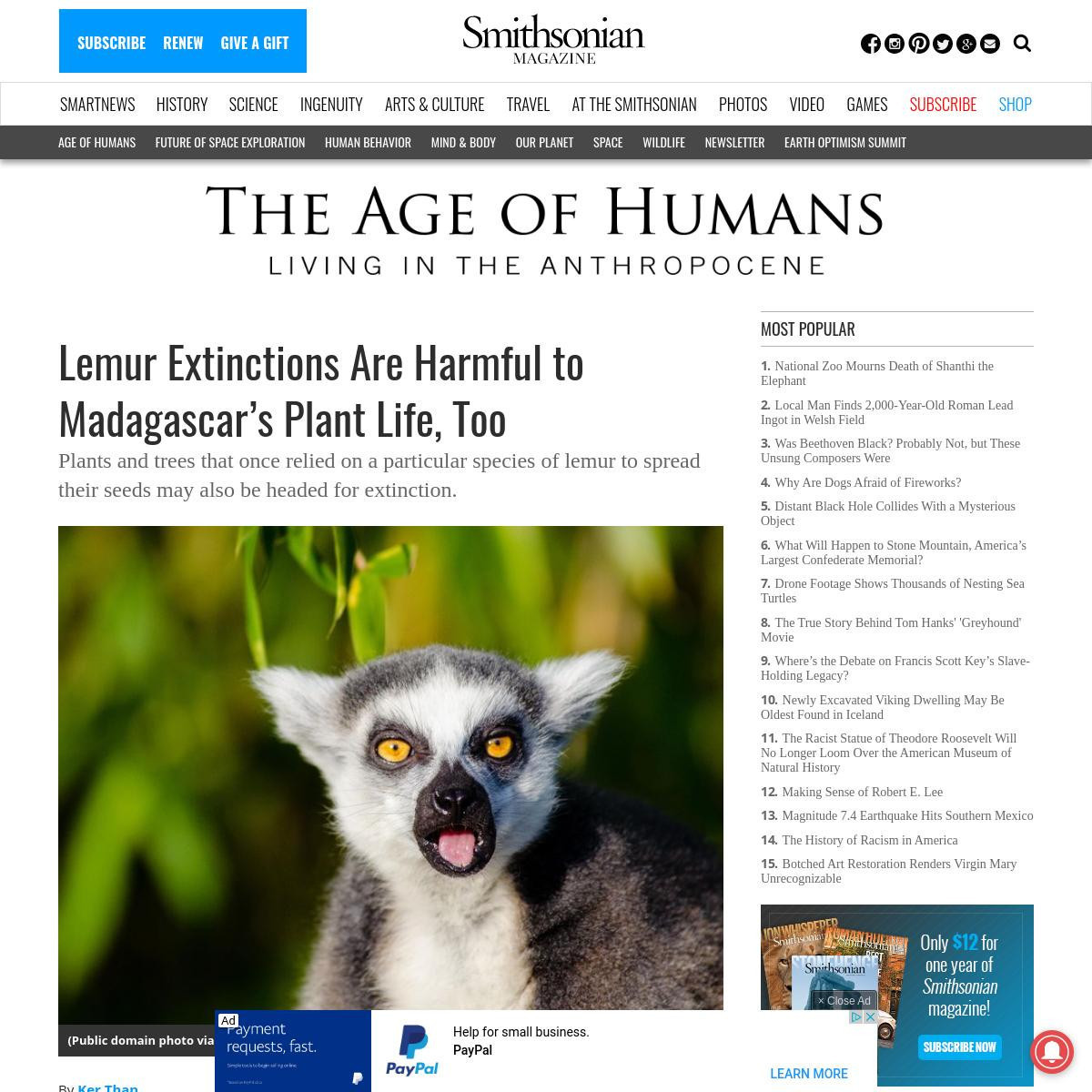