After dogs, cats and fish, birds are America’s fourth favorite pet. An estimated 14 million birds live in captivity across the United States, a great many of them parrots. And no wonder: With their captivating colors, acrobatic antics and often silly personalities, these avian characters are hard to resist.

Pet parrots can be incredible if demanding friends, but for people more accustomed to fluffy mammalian companions, they can present some unexpected challenges. The long-lived, intelligent and highly social birds need especially high amounts of attention and enrichment, or else they can pick up bad habits and find themselves bored and stressed to the point where they pluck out their own feathers.

While some pet parrots come from breeders, trade in exotic parrots is big business around the globe, and it contributes significantly to their decline in the wild. Thankfully trafficking in wild birds has been less of a problem in the U.S. since the passage of the 1992 Wild Bird Conservation Act and CITES restrictions on importing exotic species.

Now, in honor of the 14th annual National Bird Day, get a little bird-brained with these 14 facts about parrots:

1. Some Parrots Grind Their Own Calcium Supplements

As a famous research subject, the African grey parrot Alex was said to have the intelligence of a human 5-year-old. Now the psittacine tribe can claim another brainy feat: tool use. Researchers at the University of York and the University of St. Andrews observed captive greater vasa parrots (Coracopsis vasa) using date pits and pebbles to pulverize cockle shells. Male vasas ate the powder and then offered a regurgitated calcium-rich snack to females before mating. Be thankful you get chocolates.

Like most other birds, parrots have four toes per foot. But instead of the usual three-in-front-one-behind arrangement, parrot toes are configured for maximum grip: two in front and two behind, like two pairs of opposable thumbs. Combined with beaks that can crack even the world’s toughest nuts, their unique feet make them formidable eaters, not to mention dexterous climbers.

Many parrots are omnivores and will eat pretty much anything—fruit, seeds, nuts, insects and even meat. Some species, like the rainbow-colored lories and lorikeets of the South Pacific, feed almost exclusively on nectar with brush-tipped tongues, though recently even these birds were seen eating meat at feeding stations in Australia. In New Zealand, native kea (Nestor species) were first observed attacking and killing sheep in 1868 and were persecuted as sheep-killers until 1986, when they were granted protected status.

4. Not All Parrots Are Tropical

Of the roughly 350 known species of parrots, most live in the tropical and subtropical regions of Australia, Asia, Central and South America and Africa. But some parrots break that geographic mold. Keas live in alpine regions of New Zealand and nest in ground burrows, while the endangered maroon-fronted parrot (Rhynchopsitta terrisi) dwells at 6,000 feet in the Sierra Madre Oriental Mountains of Mexico.

A popular pet, the African grey parrot is at risk in the wild. (Dodge65/iStock)

5. A Third of the World's Parrots Face Extinction

Due to a combination of habitat destruction and persistent poaching for the pet trade, more species regularly land on the IUCN Red List of Threatened Species. A November study, for instance, found that logging has decimated 99 percent of the African grey (Psittacus erithacus) population in Ghana, threatening wild numbers of one of the most iconic parrot species.

With a couple of notable exceptions, males and females of most parrot species look virtually identical. It takes a keen eye—and usually a lab test—to tell a boy bird from a girl bird. But some species, like the Solomon Island eclectus (Eclectus roratus), are so different that for many years people thought they were distinct species of birds. Males are bright emerald green with flame-colored beaks, while females top off their crimson and royal blue ensembles with black beaks and a bright scarlet head.

7. Parrots Taste With the Tops of Their Beaks

Though parrots do have some taste glands at the backs of their throats, most of their 300 or so taste buds are located on the roofs of their mouths. Compared with the 10,000 taste buds in a human mouth, the birds' palate may not seem like much, but parrots do show definite preferences for certain foods.

8. The Heftiest Parrot Weighs as Much as a Cat

Parrots cover an incredible range of shapes and sizes. The tiny buff-faced pygmy (Micropsitta pusio) weighs a mere ounce and is about the size of an adult human’s finger. The world’s longest parrot is the brilliant hyacinth macaw (Anodorhynchus hyacinthinus), checking in at nearly 3.5 feet from tip to tail. But New Zealand’s flightless, nocturnal kakapo (Strigops habroptilus) wins for weight: A fully grown male can register as much as nine pounds—the average weight of an adult housecat.

9. Your Pet Parrot May Outlive You

Many parrots have near-human lifespans, a consideration many people don’t truly grasp when seeking a parrot as a companion. Larger species like macaws and cockatoos are known to live for between 35 and 50 years. Tarbu, an African grey in England, lived to the ripe old age of 55. The current oldest parrot is 82-year-old Cookie, a Major Mitchell’s cockatoo (Lophochroa leadbeateri) that resides at the Brookfield Zoo in Chicago.

Feathers from the scarlet macaw must be full of psittacofulvins. (Roberto A Sanchez/iStock)

A parrot’s brilliant plumage has a special defense against damage: Psittacofulvins, a bacteria-resistant pigment that only parrots are known to produce, give the birds' feathers their red, yellow and green coloration. In a 2011 study in Biology Letters, researchers exposed different colors of feathers to a feather-damaging bacteria strain and found that the pigments helped protect the glorious plumage from degradation.

Though most species occupy a home range throughout the year, the swift parrot (Lathamus discolor) and the orange-bellied parrot (Neophema chrysogaster) are known to migrate each year across the Bass Strait between Australia and Tasmania. Both species are critically endangered.

Though parrots are generally famous for being chatty, Puck, a cheery blue parakeet, landed in the 1995 Guinness Book of World Records for his vocabulary skills, with a recognized set of 1,728 words. In addition to speaking, Amazon parrots are renowned singers, including Groucho, who entertained TV audiences with a rendition of “How Much is that Doggie in the Window” in 2010.

13. The Black Palm Is the Panda of Parrots

Native to rainforests in the South Pacific, the black palm cockatoo is one of the most difficult birds to breed and raise in captivity. Chicks often die around one year of age—even wild pairs have difficulty successfully rearing chicks. The causes for their reproductive troubles are still unknown but may be related to their photosensitive skin, which reacts to natural sunlight.

14. A Parrot-Proof Tracker Is on the Horizon

Little is known about wild parrot behavior, in part because the canopy-dwelling birds are hard to see and follow. Also, GPS-tracking studies of parrots are extremely uncommon, since the birds are adept at removing foreign objects from their bodies. But a 2015 study published in The Auk might help scientists better track these elusive animals. By encasing GPS trackers in bite-proof plastic, the researchers were able to track a group of keas in New Zealand without any obvious ill effects on the birds. 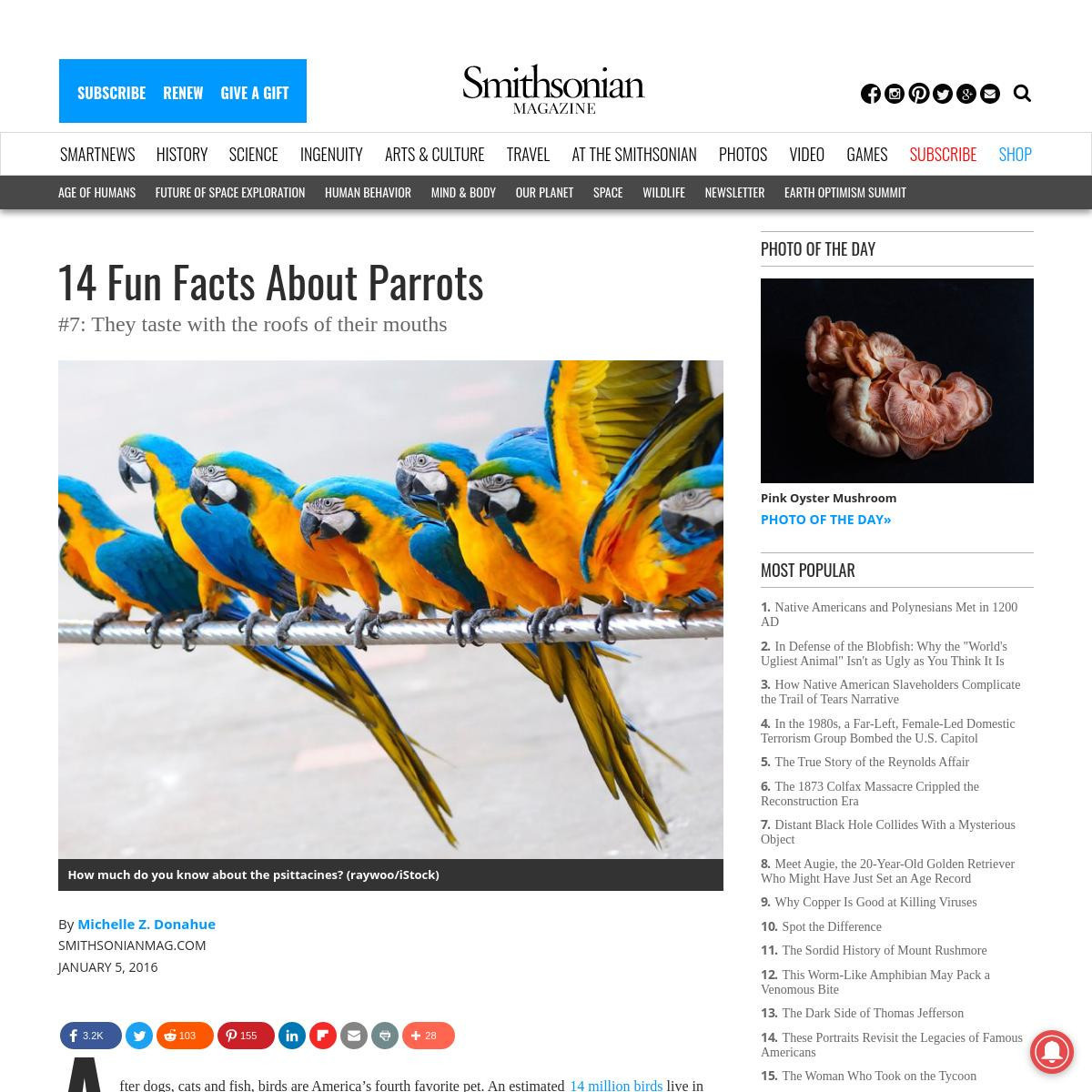