Description
A small, 11" cloth doll might seem like an incongruous object for discussing the issues of the American Great Depression. Yet enduring the depression required ingenuity and a community's collaborative effort—a story this doll tells. 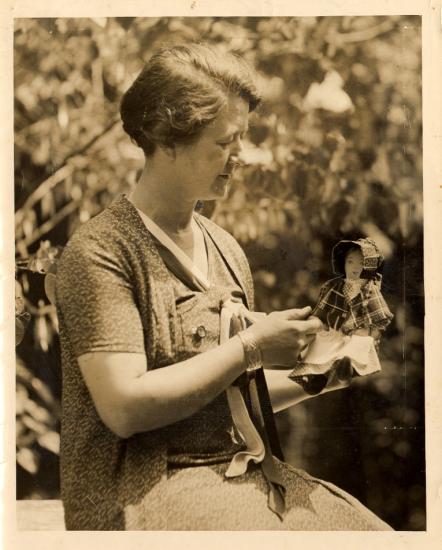 Americans had lived with painful business cycles throughout their history, but the Great Depression was unprecedented in breadth, depth, and duration. After her husband lost his job with RCA in Camden, New Jersey, Portia Howe Sperry moved with her husband and four children to rural Indiana—a place they had only driven through on previous vacations. Sensing they could eke out a living in the countryside, the family rented a small shack without running water or electricity.
Portia found a part-time job in the Nashville House Inn's gift shop selling handmade objects from the area. Hoping to generate more income for the family, the entrepreneurial Portia Sperry decided to design and market a doll based on native crafts and local skill. Having no experience in such an endeavor, Portia’s project took many months and lots of experimentation with the help of local artists and handy farmwives. With aplomb, Perry convinced the large Chicago department store, Marshall Fields, to carry the first doll (called Abigail) and the Quaker Oats Company to donate boxes to ship them in. Portia then organized local women to make the cloth doll bodies and craft the clothes. 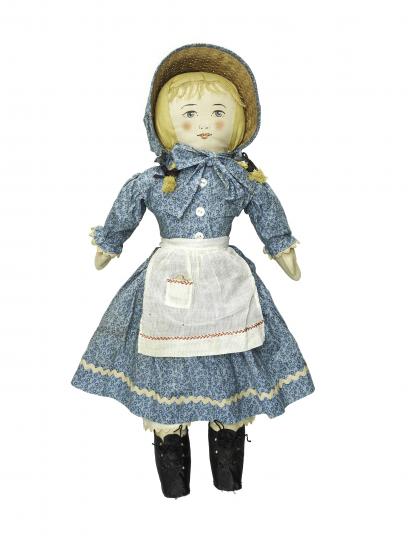 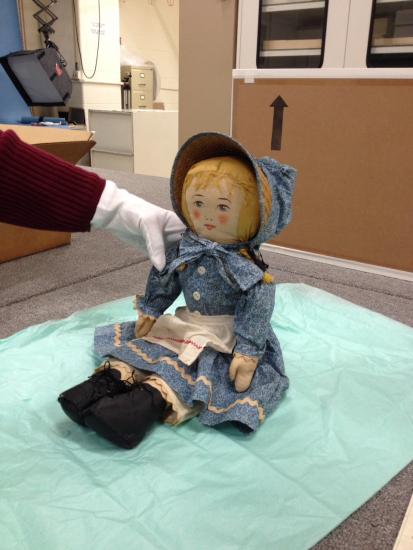 The Abigail doll was a big marketing success at Marshall Fields, putting $2,000 in the hands of Browne County, Indiana, women during the 1932 Christmas season. A year later, Sperry created the Nancy Hanks doll named after Abraham Lincoln's mother. That too did well.
By 1934 the inn's little gift shop was on the map. While touring the Midwest to encourage a depressed rural populace, First Lady Eleanor Roosevelt visited the gift shop, touted the cooperative nature of the crafts activities as a national self-help model, and purchased a Nancy Hanks doll (though not the one featured on this blog). 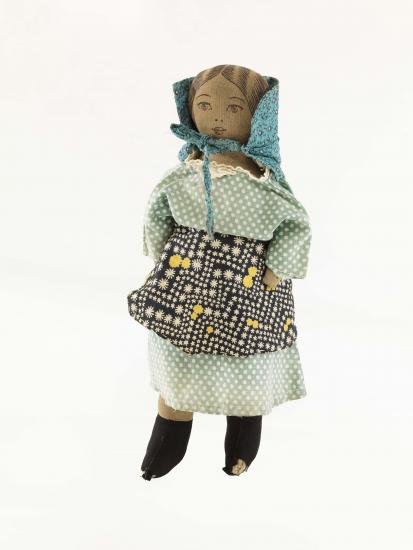 So the community prospered, but how did Portia and her husband Ralph fare? The story of Portia's entrepreneurial efforts spread. She gave talks to local groups, wrote an article on her families' depression experiences for the 1934 Woman's Home Companion, and in 1938 published a popular children's book entitled Abigail. In 1934 the Wurlitzer Piano Company offered Ralph a job designing their new upright spinet piano. The little craft shop remained in family hands until 1984.
With the generous assistance of Sperry's descendants, the museum was able to collect an original "Abigail" doll. Visitors to American Enterprise, opening July 1, will be able to see Abigail and learn more about how everyday Americans weathered the Great Depression.
An earlier version of this blog post appeared on the American Enterprise pre-exhibition website in May 2011. For further reading: Dirks, Barbara J., "'Doing It Together': The Sperry Family of Brown County, Indiana," Traces of Indiana and Midwestern History 13 (Fall 2001), 34–43.
Want more stories of American innovation and inventiveness? Join us to explore the theme of American innovation through blog posts, exhibitions, collections, programs, and more.
Related Staff Member:
DavisNE
Categories: 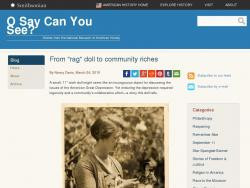