The world's youngest country is now home to Africa's smallest and most endangered elephants.

The researchers spotted the critically endangered pachyderms, which are smaller than their more famous savannah cousins, using camera traps set up in South Sudan's Western Equatoria state, a region of densely forested hills near the borders of the Democratic Republic of the Congo and the Central African Republic.

The elephants weren't the only surprise. A total of 37 species appeared in the images, including four more species never before documented in South Sudan: an elusive African golden cat, a water chevrotain (sort of like a tiny deer), red river hogs and a giant pangolin.

The cameras also picked up previously known South Sudanese species, such as chimpanzees, leopards, forest buffalo, bongo antelope and honey badgers. Such a cornucopia is the product of Western Equatoria's unique position in South Sudan, where the Congo Basin meets the flat savannahs of the Horn of Africa.

The thriving forest wildlife is good news for South Sudan, a five-year-old country that hopes to someday promote wildlife tourism but is mired in a brutal civil war. Since the war broke out in December 2013, 50 percent of elephants collared by the Wildlife Conservation Society are believed killed, bringing estimates for the country's total elephant population down to just 2,500 individuals. The hunting was likely done by soldiers and civilians alike hunting wildlife for sustenance amid near-famine conditions.

The discovery is also good news for forest elephants generally. Across Africa, over 60 percent of the animals disappeared between 2002 and 2011 amid intense poaching pressure, according to a 2013 survey published in PLOS ONE. South Sudan is far to the north and east of forest elephants' previously known range, which opens the possibility that the animals inhabit large tracts of the Democratic Republic of the Congo in between.

"Forest elephants are already critically endangered—they're really under fire," says Reeder, who co-led the camera-trap investigation. "We've just significantly extended their range to the east. If you look at 2013, of where forest elephants remain, they're nowhere near this part [of Africa]."

Image by FFI & Bucknell University. A bongo antelope wanders into the view of a camera trap in South Sudan. (original image)

Image by FFI & Bucknell University. This honey badger don't care that it was caught by a camera trap in South Sudan. (original image)

Image by FFI & Bucknell University. A giant pangolin hurries past one of the South Sudan camera traps. (original image)

Image by FFI & Bucknell University. The camera traps caught a family of up to eight forest elephants in South Sudan. (original image)

Image by FFI & Bucknell University. A leopard stalks through the grass of Western Equatoria. (original image)

Image by FFI & Bucknell University. A chimpanzee walks across a log in South Sudan. (original image)

Image by FFI & Bucknell University. A ranger and a wildlife ambassador set up a camera trap in the South Sudan forest. (original image)

To find the elephants and other animals, Reeder and her colleagues assembled a team of South Sudanese wildlife rangers and "wildlife ambassadors" drawn from local communities. They set up 23 camera traps across some 3,100 square miles of Western Equatorian forest.

After six months, the team checked the photos and found images of a family of up to eight forest elephants lumbering through the forest, standing in the rain and eyeballing the camera.

"Thousands and thousands of photographs you're looking through, and then the first one is an elephant looking through a frame," says Reeder's co-leader Adrian Garside of FFI. "Absolutely amazing."

Persistent wars since the 1950s have restricted scientists from accessing the area that is now South Sudan to study what lives there. Reeder only started researching in the region in 2008, three years after the end of a 22-year civil war.

And a recent increase in fighting between South Sudan's rebels and its government could create opportunities for further criminal activity and force civilians to hunt more wildlife for survival.

For these reasons, the researchers have been careful not to release any details about where the forest elephants were spotted in Western Equatoria's 30,600 square miles. They continue to work with South Sudan's wildlife conservation ministry training dozens of rangers and educating hunting communities about which animals need protection.

"This doesn't in any way say forest elephants aren't really endangered," Reeder says. "It extends the range where we need to have protective measures."

Still, given the steady stream of depressing news coming from South Sudan over the past two years, finding so many unique species thriving despite the chaos is a glimmer of hope.

"The whole of South Sudan was one of the most phenomenal areas for wildlife," says Garside. "In the course of civil wars that was depleted considerably, but what we are discovering is there are these little pockets left in South Sudan and in this region where there is significant wildlife. ... There's hope for the future." 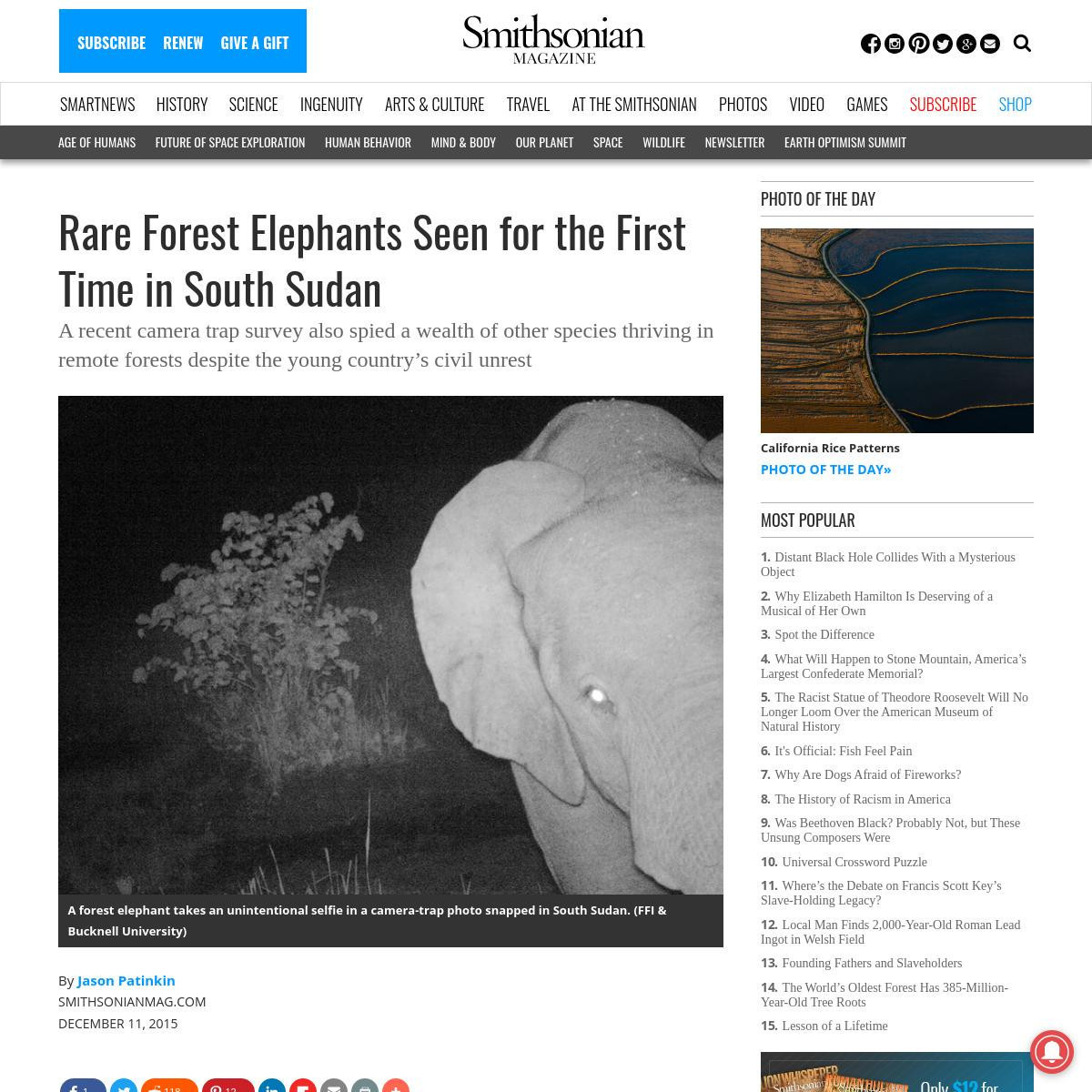