Last Thursday morning, Nicole Seminara, a dermatologist at New York University, received a text message from her aunt Jovanna Porter. Her aunt had heard about the shortage of face masks for healthcare workers responding to COVID-19 and asked if she could sew homemade masks for Seminara, who volunteered at her hospital to treat patients with COVID-19, the disease caused by the coronavirus. “I made Nicole her baby blanket,” Porter says, “and I hand embroidered and made the pillow for the ring bearer when she got married,” so the instinct felt natural.

Seminara knew firsthand about the mask shortage. She learned that healthcare workers had to continuously use equipment that they previously would have discarded after use with one patient. Her hospital had notified employees about dwindling supplies. She had heard that elsewhere, a healthcare worker put a plastic bag over his head because Personal Protective Equipment, or PPE, wasn’t available.

As her aunt started sewing, Seminara and her residents formed a campaign called Masks4Medicine to solicit masks more widely. “I just thought it was such an amazing idea, if we could do it on a large scale to try to help bridge the shortage of personal protective equipment,” Seminara says. In the first few days, they collected around 100 homemade masks and more are on the way, many from fashion industry workers who trained at a top design school and have appeared in outlets such as Vogue and Harper’s Bazaar. Their efforts have also revived the discussion over whether homemade masks are better than no masks at all.

Jovanna Porter has sewn brightly colored face masks to send her niece, Nicole Seminara. "The masks that are coming out are absolutely stunningly beautiful," says Seminara. "If this were not for safety reasons, I think they would be really a hit just for fashion reasons." (Jovanna Porter)

As of Thursday afternoon, the Centers for Disease Control and Prevention (CDC) reported 68,440 COVID-19 cases in the United States. The CDC has recommended that healthcare workers use N95 respirators, but supplies of those and of surgical masks are low.

Masks4Medicine isn’t the only group sewing and distributing masks to address the shortage. Besides New York, efforts are underway in California, Minnesota, Ohio, Washington state, and elsewhere. At least 170 institutions in 28 states are accepting them, according to a list by students at University of California, Berkeley School of Public Health. Kathy Braidich, founder and director of The Turban Project, a nonprofit that supplies volunteer-made apparel to medical patients, says that views of the organization’s mask-making video from 2018 increased almost 1,000 percent in less than a week.

But the New York City efforts are unique because the need is so high (on Thursday the city had 21,393 reported cases) and because many of the people making masks are from the fashion industry. Those volunteers find themselves with a desire to help, as well as free time as they have temporarily closed their studios and as clients have canceled orders.

One person distributing masks to Seminara’s Masks4Medicine and other places is Samantha Sleeper, a Parsons School of Design alumna and former instructor who runs a studio that makes couture gowns. “I wanted to get my mind off of the anxiety I was feeling and just do something concrete and do design for good,” she says. So she sewed a mask prototype and posted instructional videos on Instagram. Then she prepared around 500 “sew kits” to distribute consisting of twill tape, strings and pieces of muslin, which is unbleached cotton fabric. “A lot of us who run fashion businesses have the small-scale infrastructure you need,” she says. “We have cutting tables, we have supplies, we have machines.”

Another Parsons alumna involved is Jamie McCarty, a stylist, fashion designer and tailor who runs a vintage store. She made 30 masks and distributed them to an emergency room doctor who contacted her through Instagram. She later teamed up with Sleeper. “It was always a joke when we were in school at Parsons, ‘Oh calm down, it’s just fashion, you’re not saving lives,’” McCarty says. “But now we find ourselves with these sewing skills that could actually be useful to healthcare workers.”

Their Brooklyn-based operation now has six neighborhood leaders, five runners and 34 sewers or potential sewers. As of Wednesday afternoon, they had completed at least 163 masks and signed up to sew more than a thousand, according to a Google spreadsheet of their progress. Sleeper plans to distribute another 500 sew kits on Friday.

New York Governor Andrew Cuomo tweeted that people should get “creative” to help with the shortage of equipment, and larger fashion industry operations have also responded. Designers such as Christian Siriano are making masks and others have opened their factory space to manufacture masks and offices to sort donations. Outside of New York, a sew shop in Los Angeles has raised almost $50,000 for supplies to produce masks. The Council of Fashion Designers of America, a trade association, provided information to members about coordinating with government agencies. Companies like Prada, H&M and Zara are also getting involved.

But the masks have to work.

Seminara points to CDC guidance saying healthcare workers can use homemade masks and even bandanas as “a last resort.” She says the homemade masks should go to “people more peripherally involved,” not to those directly treating COVID-19 patients. “It frees up [N95] masks to go to the people who are really, really high risk,” she says. Healthcare workers can also wear the homemade masks over the N95 and surgical masks to make them last longer, and infected people can wear them to lower the risk of transmission, she says.

Many of the homemade mask-makers have cited a 2013 study by researchers in the United Kingdom who found that homemade masks filtered particles, though surgical masks were three times more effective. The researchers found that a cotton T-shirt had a mean filtration rate of around 70 percent for one bacteria and around 51 percent for another. By comparison, a surgical mask had rates of somewhere between 90 and 96 percent. The study concluded, “A homemade mask should only be considered as a last resort to prevent droplet transmission from infected individuals, but it would be better than no protection.” In other words, infected people should use them to reduce transmission, but healthcare workers should not use them for protection, it said. The study was the most-read paper for the University of Cambridge on ResearchGate last week. (A Cambridge University Press journal published the study, but the authors were from other institutions.)

But Anna Davies, lead author of the study, says she feels “uncomfortable” that people are using the study to justify homemade masks for professionals. “We didn’t even think about it for healthcare workers. We were just looking at it for the general public,” says Davies, now a research facilitator with the Department of Veterinary Medicine at the University of Cambridge. “It was really about people at home cutting up T-shirts to make a mask for when they need to go to the shops.”

But given the current shortage, Davies says, if homemade masks “stop people from using surgical masks that can be used by healthcare workers, then they’re not a bad thing.” Davies says her email inbox is flooded with questions from people about how to make masks. She has now published a guide on doing so.

Studies from 2008 and 2010 support the idea that homemade masks are better than no masks. And last week, a group of researchers published an article on Medium making the case that “simple do-it-yourself designs or commercially available cloth masks could reduce the spread of infection at minimal costs to society.” But the World Health Organization says that cloth masks “are not recommended under any circumstance.” Medical-grade masks consist of melt-blown fabric, which is much different than the fabric that the fashion designers and others are using.

One study found that cloth masks might actually be worse than no masks, potentially because they could retain moisture and not filter particles properly. University of New South Wales researchers wrote in a 2015 study that nearly 97 percent of particles penetrated the cloth masks, compared to 44 percent for medical masks. “Cloth masks should not be used by workers in any healthcare setting, but particularly high-risk situations such as emergency departments, intensive care, pediatric, or respiratory wards,” lead author Raina MacIntyre said at the time. (More recently, MacIntyre told Live Science otherwise: “When doctors are facing not having PPE, I think they should use whatever they can, and if it is homemade, it’s better than nothing.”)

The White House said Wednesday that it planned to ship 9.4 million N95 masks and 20 million surgical masks to hospitals around the country. For that reason, Anthony Fauci, director of the National Institute of Allergy and Infectious Diseases, said at a White House press briefing that homemade masks were unnecessary. “You would only recommend that under desperate situations if you don’t have any masks,” he said. “But what we’re seeing now, as you’ve heard, is a rather significant inflow of masks that are coming in that are going to be available.”

But the need is significant. “It’s been the craziest and most chaotic time of my entire life,” says Seminara. She says colleagues in her department have caught the coronavirus. “You hear about social isolating. We’re doing the exact opposite,” she says. “Everyone in medicine knows multiple people now who have been infected.”

She adds about the cloth masks, “There’s already such a critical shortage and some hospitals are essentially out, and so they need these now. It’s not the best thing possible; It’s the best thing we’ve got at the moment.” 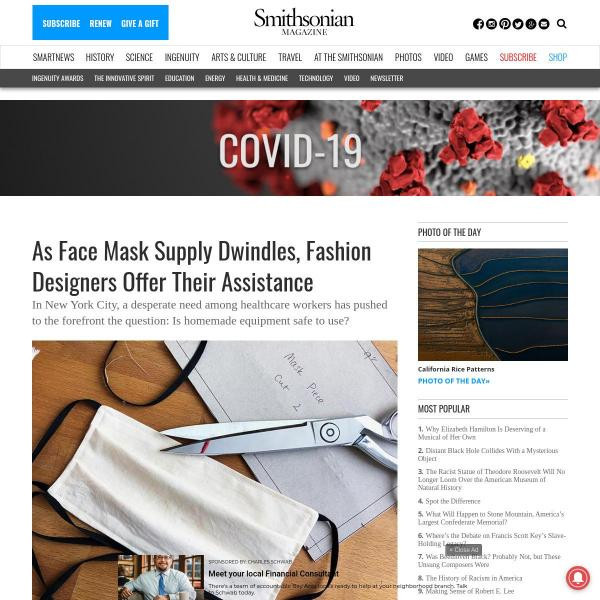