Between December 1944 and January 1945, members of Hungary’s fascist Arrow Cross Party executed as many as 20,000 Jews on the banks of the Danube. Éva Székely was 17 years old when a young official came to round her up. Decades later, providing survivor testimony to the University of Southern California’s Shoah Foundation, she recalled his unique appearance: “One of his eyes was grey and the other one was brown. And this stayed with me, as never before had I seen a man with different colored eyes.”

Székely’s father attempted to plead with the fascist, claiming that his daughter was sick and unable to walk. When that failed to sway the official, her father tried a different approach: “She is the swimming champion of Hungary,” he said, “and one day you will be happy you saved her life!”

Miraculously, Székely was spared. And her father’s words would prove prophetic. In 1950, she won a gold medal in an international swimming competition held on Hungary’s Margaret Island. One of the people presenting her prize was the major of the Communist Political Police.

“Imagine, there I was standing there, up on top of the dais … and the man looks at me,” she recalled. “It was that Arrow Cross man, with his different colored eyes.”

Székely, whose remarkable life was marked by both great adversities and great triumphs, died on February 29 and the age of 92, according to Emily Langer of the Washington Post. The cause of death is not known, but Székely’s health had reportedly been declining. She remained active late in life, continuing to swim even as she neared the age of 90.

Born in Budapest in 1927, Székely became interested in swimming after listening to a radio broadcast of Hungarian swimmer Ferenc Csik winning the 100-meter freestyle at the 1936 Berlin Olympics, reports the Guardian’s Andy Bull. She joined a local sports club team that went on to win a national open water title, but was soon booted from the team because of her Jewish heritage.

Her father, she said, told her that “when all the madness was over one’s religion would make no difference.” But conditions for the Jews of Budapest continued to worsen. Forced to live in buildings marked with Stars of David, some 20,000 were rounded up and deported to Auschwitz-Birkenau. Then, in November 1944, the Germans forced more than 70,000 Jews to march from Budapest to camps in Austria. Those who survived the brutal journey—and many did not—were taken to concentration camps or put to work as forced laborers. Any Jews who remained in Budapest were relocated to a closed ghetto.

Székely, according to the Guardian, was recruited into a labor battalion, but escaped by “leaping onto a passing streetcar during a forced march through the city.” She spent the latter years of the war in a Swiss-operated safe house where 42 people were packed into just two rooms. According to theEncyclopedia of Jewish Women, Székely stayed in shape by running up and down five flights of stairs 100 times every morning.

After the war, Székely started competing in international sporting events. At one competition, she met Dezsö Gyarmati, a Hungarian athlete regarded as one of history’s best water polo players. They married and had a daughter, Andrea.

Between 1946 and 1954, Székely snagged 32 national individual swimming titles and 11 national team titles. In 1948, she competed at the Olympic Games in London, placing fourth in the in the 200-meter breaststroke. Four years later, she competed in the same race at the Olympic Games in Helsinki—and this time, she won the gold medal, setting an Olympic record in the process.

In 1956, not long after the outbreak of the anti-communist Hungarian Revolution, Székely and Gyarmati traveled to Melbourne for the Olympic Games. While in Australia, they learned that the uprising had been brutally crushed by the Soviets. Székely was sick with worry for her daughter and parents, who had stayed behind in Budapest; she reportedly lost more than 12 pounds in the lead-up to the Olympics. Still, she competed, winning a silver medal in the 200-meter breaststroke.

Székely and Gyarmati went back to Hungary and subsequently defected to the United States. They soon returned, however, to care for Székely’s elderly parents. Székely decided to retire from active competition, working instead as a coach for young swimmers—among them her daughter, who would go on to become an Olympic medalist in her own right.

Székely accompanied her daughter to the infamous 1972 Munich Games, during which eight Palestinian militants attacked the Israeli Olympic team. She befriended Moshe Weinberg, an Israeli wrestling coach who was one of the 11 team members killed; according to the Guardian, the two had coffee the morning before the massacre.

In spite of the persecution she had experienced in her lifetime, Székely did not attempt to obscure her Jewish identity—a fact that set her apart from many other Hungarian-Jewish athletes, according to the Encyclopedia of Jewish Women. In 1974, she gave an interview for Hungarian television in which she recalled the discriminatory laws of the 1940s. Some people at the time, she noted, could prove that their grandparents were not Jewish.

“That was no problem for me,” she said. “I did not have to go back as far as my grandparents. Unequivocally, I was a Jew.” 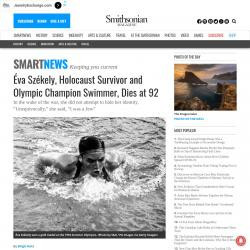