In the coming months, library patrons will likely experience extended wait times for new e-books. Readers can thank Macmillan Publishers—a “Big Five” publishing house with imprints including Picador, Henry Holt and Farrar, Straus, and Giroux—for the delay: As of November 1, the company only allows library systems to purchase one electronic copy of a book during the first eight weeks following publication.

The publisher’s new policy has generated widespread outrage among librarians and book lovers alike. Macmillan, however, argues that the moratorium is necessary to ensure the publishing industry’s survival in lieu of digital lending’s increasing popularity.

CEO John Sargent announced the change in a July memo sent to Macmillan authors, illustrators and agents. According to the note, loaned library copies make up 45 percent (and counting) of the company’s total e-book reads across the United States.

“It seems that given a choice between a purchase of an [e-book] for $12.99 or a frictionless lend for free,” wrote Sargent, “the American [e-book] reader is starting to lean heavily toward free.”

Sargent tells NPR’s Lynn Neary that the publishing industry operates similarly to the movie business. Films generate the biggest box-office returns during their opening weekend, while most book sales take place in the first few weeks after publication.

In the past, library loans had less of an impact on publishers’ sales due to “friction,” or complications, associated with borrowing books: Patrons had to visit the library in person, return loans on time and pay pesky late fees.

E-books have simplified the borrowing process significantly. As Sargent explained in an October 29 letter to concerned librarians, “In today’s digital world there is no such friction in the market. As the development of apps and extensions continues, and as libraries extend their reach statewide as well as nationally, it is becoming ever easier to borrow rather than buy.”

The Macmillan executive added, “This causes a problem across the publishing ecosystem (authors, illustrators, agents, publishers, libraries, retailers, and readers). We are trying to find a solution.”

On October 30, a group of “library advocates” associated with the American Library Association (ALA) stopped by Macmillan’s offices to deliver a petition urging the publisher not to move forward with the embargo. Organizers collected some 160,000 signatures, but as they note on the online petition portal, Sargent “did not listen.”

According to ALA testimony presented in front of the U.S. House of Representatives’ Committee on the Judiciary last month, e-book publishers engage in a host of “anti-competitive conduct” practices. Amazon Publishing, for example, refuses to sell digital titles to libraries, meaning readers have to purchase from Amazon directly. And when publishers do sell copies of e-books to libraries, the prices are often inflated. (Anthony Doerr’s All the Light We Cannot See, the 2015 Pulitzer Prize winner for fiction, costs consumers $12.99, but a library purchasing a two-year license for a single electronic copy pays $51.99.)

In an essay written for the San Francisco Chronicle, City Librarian Michael Lambert says the embargo impacts libraries’ central mission of “ensuring access to information and content for all.” He adds that the policy places individuals with visual impairments at a disadvantage, as these readers rely on easily formatted e-books to keep up with the latest titles. Large-print paper copies of new books often take months to come out. People with dyslexia and other learning disorders also rely on e-books to make reading easier.

Macmillan’s policy is poised to disproportionately impact larger library systems. A small rural library may be able to manage with just one copy of an e-book, but cities or counties with hundreds of thousands of patrons will have to place would-be borrowers on lengthy waiting lists.

Former ALA president Sari Feldman tells NPR’s Neary she doesn’t think the policy will increase retail or digital sales for Macmillan, as many people who borrow e-books have a limited income and will simply opt to read more accessible options. Given the fact that libraries purchase a significant number of e-books, the publishing house could also lose digital sales during the key weeks immediately post-publication.

Moving forward, Feldman says, the ALA may pursue legislative action against the restrictions.

In his open letter, Sargent said the decision is designed to help authors, booksellers and other players in the publishing world.

“We are not trying to hurt libraries; we are trying to balance the needs of the system in a new and complex world,” he wrote. “We believe windowing for eight weeks is the best way to do that. I am the first to admit we may be wrong. But we need to try to address this issue.” 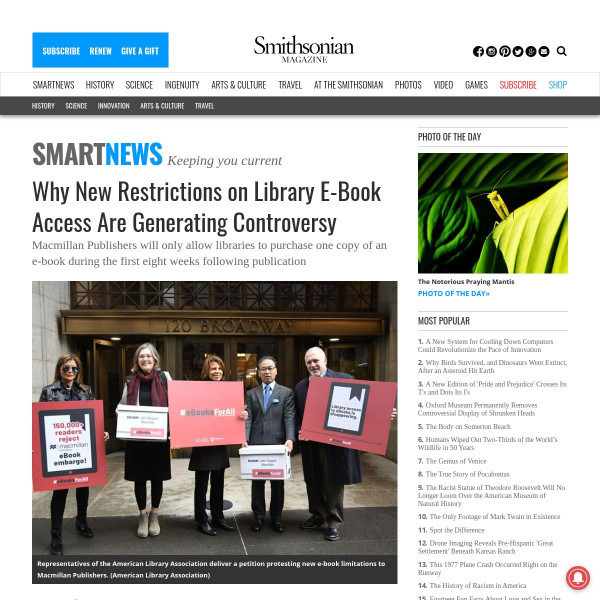