Since researchers discovered the first exoplanets in the 1990s, astronomers have gotten pretty good at finding satellites orbiting distant suns, cataloguing 4,000 planets in more than 3,000 planetary systems since then. Now, researchers are interested in learning how these planets form, and a new technique may help them find hard-to-locate baby planets.

Young stars often have a disk of gas and dust swirling around them. Planets typically coalesce from this material, and eventually grow large enough to clear a path through these protoplanetary disks. But researchers aren’t certain that all of the gaps they’ve found actually come from young planets. That’s why a team recently looked at these disks in a new way, as they describe in a new study published in the journal Nature.

Astrophysicist Richard Teague, who conducted the study at the University of Michigan, and his team examined new high-resolution data from the Atacama Large Millimeter Array (ALMA), a radio observatory in Chile. In particular, they were able to observe the velocity of carbon monoxide gas moving within the protoplanetary disc around a young star called HD 163296. While hydrogen makes up the majority of the gas in the disk, carbon monoxide emits the brightest wavelengths, giving researchers the most detailed picture of how gas moves within the disk.

“With the high fidelity data from this program, we were able to measure the gas’s velocity in three directions instead of just one,” Teague, who is now a research fellow at Harvard-Smithsonian Center for Astrophysics, says in a statement. “For the first time, we measured the motion of the gas rotating around the star, towards or away from the star, and up- or downwards in the disk.”

When the data was processed with computer modelling, it revealed three areas where gas from the surface of the disc flows toward the middle layers, like a waterfall. The findings line up with previous studies that suggested three giant planets—one half the size of Jupiter, one Jupiter-sized and one twice the size of Jupiter—are forming in the disk.

“What most likely happens is that a planet in orbit around the star pushes the gas and dust aside, opening a gap,” Teague says in a statement. “The gas above the gap then collapses into it like a waterfall, causing a rotational flow of gas in the disk.”

Erika K. Carlson at Astronomy reports that the findings also suggest that the movement of gases within these protoplanetary disks is pretty complex. “There’s a lot more going on than we previously thought,” Teague tells Carlson. “We thought it was just rotating in a rather smooth manner.”

Since researchers have not directly observed the young planets forming in the disk, it’s possible HD 163296’s magnetic field is causing the anomalies in the disk. But co-author Jaehan Bae of the Carnegie Institution for Science, who ran the computer simulations, says planet formation is the most likely cause.

“Right now, only a direct observation of the planets could rule out the other options,” Bae says in a statement. “But the patterns of these gas flows are unique and it is very likely that they can only be caused by planets.”

Carlson reports that the team hopes to look at HD 163296 using other wavelengths to see if they can get data on gas movements deeper within the protoplanetary disk. And after that, the hope is that such observations will be confirmed visually when a new class of telescopes comes online in the early part of the next decade, including the James Webb Space Telescope scheduled for launch in early 2021. 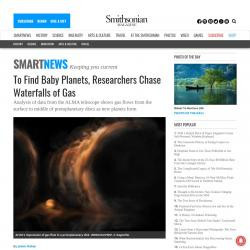