Change Author / Owner : 3-D Map to Digitize Part of Carlsbad Caverns Down to the Millimeter

Several years before Carlsbad Caverns was established as a National Park in 1930, a mineral examiner by the name of Robert A. Holley was dispatched to survey the famed New Mexico limestone cave system carved out of acidic water.

After one month of study, Holley left humbled. "I enter upon this task,” he wrote, “with a feeling of [no] temerity as I am wholly conscious of the feebleness of my efforts to convey in words the deep conflicting emotions, the feeling of fear and awe, and the desire for an inspired understanding of the Divine Creator's work which presents to the human eye such a complex aggregate of natural wonder in such a limited space."

Things have changed since Holley’s day. Now, Adrian Hedden at the Carlsbad Current-Argus reports, the National Parks Service is working with the University of Arkansas’ Center for Advanced Spatial Technologies to use a light-detection and ranging tool known as LiDAR to create a 3-D map that will detail the nuances of the namesake cave “down to the millimeter."

According to a press release by the University of Arkansas, researchers made three trips back in January and February to begin scanning everything visible from the 3.5 miles of developed trail inside the Carlsbad Caverns, including the most-popular trail, the Big Room, the “largest single cave chamber by volume in North America,” according to the NPS. The ambitious project, which started in 2015, is slated to wrap by the end of this year.

Alongside the mapping work, a team led by Kimball Erdman, an associate professor at the University of Arkansas, is also creating a cultural landscape inventory (CLI) of the Carlsbad Caverns' modern history. A CLI is an interdisciplinary document whose purpose is to "identify cultural landscapes in the national park system and provide information on their location, historical development, characteristics and features, condition, and management."

“We’re looking at the ways in which humans have interacted with this environment in the past 100 years,” says Erdman in a statement. “With this the National Park Service can take the next steps for restoration, rehabilitation, or whatever needs to be done.”

Native Americans have known about the existence of the cave system—which includes some of the best-preserved fossils of ocean life from the Permian Era, back when a barrier reef formed there millions of years ago as part of an inland sea—for hundreds, if not thousands, of years. But national recognition only came to the site in the 1920s, two decades after a cowboy named James “Jim” Larkin White stumbled upon it in 1898. It was first declared a national monument by President Calvin Coolidge in 1923, following Holley's survey. Two years later, the first wooden staircase was built to allow visitors to access the caverns.

Details about various attractions, such as the “underground lunchroom” that sits 750 feet below the surface, as well as information about how various natural features in the National Park were named will also be included in the inventory.

According to the NPS, the mapping project and historical survey “will serve as a guide for the National Park Service as it manages both natural and developed environments in the caves.” It is expected that the NPS may also use the work to earn the caverns a spot on the National Register of Historic Places. 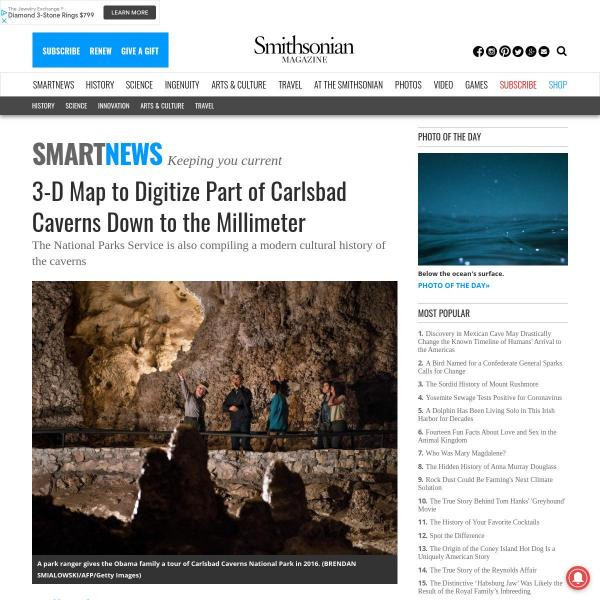