The 21-year-old Mei Xiang, the National Zoo’s female panda, is taking a breather from entertaining visitors because Zoo keepers saw she was exhibiting potential signs of a pregnancy. The Zoo has announced that the Giant Panda House is now closed, but reminds visitors that they can still see the other pandas, Tian Tian and Bei Bei, playing in their outdoor yards.

Mei Xiang’s ambiguous maternal behaviors (is she, or isn’t she pregnant?) delivers heightened anticipation this time of year around Washington D.C., where cub births are welcomed with universal joy.

But just because Mei is spending most of her time sleeping, and is sensitive to noise, and is showing an increase in her hormone levels, that also could mean that she is experiencing a pseudopregnancy. The question of pregnancy will remain unanswered until either the keepers detect something in an ultrasound, or she gives birth.

Meanwhile, here for reader edification, we present our list of 14 Fun Facts About the Zoo’s Giant Pandas.

1. What other behaviors do female pandas show when they are experiencing hormonal changes?

In her den, Mei Xiang also began building a small nest of shredded bamboo. Keepers expect her to start showing less interest in food in the coming weeks. She might also cradle her toys and exhibit body-licking.

2. How many giant pandas are there in the world today?

There are only 1,864 giant pandas living in their native habitat in central China's provinces of Sichuan, Shaanxi and Gansu. Another 500 pandas live in zoos and breeding centers around the globe. For more about at-risk panda populations, check out our story “Panda Habitat is Severely Fragmented, Placing Pandas at Risk.” The Smithsonian’s National Zoo is one of the top leaders in conservation. Working closely with experts in China, researchers at the Zoo are leading efforts to better understand giant panda ecology, biology, breeding, reproduction, disease and proper animal care.

Mei Xiang, born on July 22, 1998, has oval eye patches and a faint black band across the bridge of her nose. (National Zoo)

3. What do the names of the three pandas at the National Zoo mean?

Mei Xiang, who was born on July 22, 1998 at the China Research and Conservation Center, is an adult female with a pale black band across the bridge of her nose and oval eye patches. Her name means “beautiful fragrance.” The male Tian Tian, who was also born at the China Conservation Center on August 27, 1997, has eye patches shaped like kidney beans and two black dots across his nose. His name means “more and more.” Bei Bei is the male cub of Mei Xiang and was born at the Zoo on August 22, 2015. His name means “precious treasure.”

4. How many times has Mei Xiang given birth?

Six times. On July 9, 2005, she delivered Tai Shan, who stayed four years at the Zoo and then, by agreement, left for China on February 4, 2010. Another cub was born September 16, 2012, but died a week later from liver damage. Bao Bao was born August 23, 2013 and left for China on February 21, 2017. A stillborn cub was delivered a day after Bao Bao’s birth. Two years later Mei Xiang again delivered two cubs on August 22, one was Bei Bei, the other cub died.

5. Why must the panda cubs leave Washington, D.C. for China?

Giant pandas are on loan to the Zoo and by agreement, when the cub reaches the age of four, the animals are sent to China to become part of the breeding population. To learn more about the breeding center, check out our story “The Science Behind the Unbearably Cute IMAX Movie Panda.” The four-year-old Bei Bei is soon to leave for China, as well. Bao Bao’s departure in 2017 was delightfully reported in this piece “How to FedEx a Giant Panda.” The adult pandas Mei Xiang and Tian Tian will continue to live in Washington, D.C. through 2020.

6. How long is a panda pregnancy?

It takes 90 to 180 days, with the average gestation lasting 135 days. Ovulation for a female panda occurs only once a year in the spring and it lasts just two to three days. Panda breeding is a specialized science, for much on that, see our story “How Does Science Help Pandas Make More Panda Babies?”

7. How are the pandas cared for at the Zoo?

They are fed bamboo, sweet potatoes, pears, carrots and apples and biscuits, all carefully monitored for proper nutrition requirements. The bamboo is grown by the Zoo’s nutritionists at the Smithsonian Conservation Biology Institute in Front Royal, Virginia. Keeping the panda’s busy with fun activities is also a key to their proper care. This video shows the way keepers keep the animals entertained. Keepers are especially attuned to the animals’ needs, but are always mindful that the creatures are dangerous and are much stronger than humans. So, they never enter into the animals’ spaces.

Because pandas are adapted to the high-altitude forests in the mountainous central regions of China, snow is their happy place. Take a look at the Zoo’s “Panda’s Play in the Snow” videos to see how much the animals love the city’s winter weather. But for hot, humid summer days, the Zoo keeps air-conditioned spaces with misting sprays where the animals can go to remain comfortable.

One of the giant panda cubs born on Aug. 22, 2015 at the Smithsonian's National Zoo is examined by veterinarians. (National Zoo, Pamela Baker-Masson)

The Zoo’s popular Giant Panda Cam is one of the best ways to listen in for the chirps, honks, bleats, barks and squeals. According to the Zoo, the vocalizations can indicate distress (chirps and honks), pain (squeals), a friendly gesture (bleats), a defensive threat (chomp—a teeth clattering rapid opening and closing of the mouth), or a bark to scare off an enemy.

10. Why are the animals black and white?

There is really not a certain science for this question. The Zoo tells visitors that when a giant panda is sitting quietly without moving in a patch of dense bamboo, they are nearly invisible. On snow-covered rocky outcrops in their mountainous habitat, they are also quite hard to find. So likely their characteristic black and white patches are a very effective form of camouflage. The black and white patterns might also be a way for giant pandas to see and identify each other. They are solitary creatures. So a panda might use the patterns to identify other pandas in order to keep their distance. The black and white markings could also help with temperature regulation—black absorbs heat and white reflects it.

They have a “pseudo thumb” that helps them hold onto bamboo stems. It is formed from an elongated and large wrist bone that is covered by a fleshy pad of skin.

The National Zoo’s Hsing-Hsing lived until the age of 28. Pandas in the wild likely have shorter lifespans than zoo animals, but some pandas have reportedly lived to the age of 38.

13. Whats’ the best time to visit the pandas?

Mornings are best, if only to avoid long lines. The panda house is currently closed for Mei Xiang’s comfort, but the outdoor yards are open all day from 8 a.m. to 6 p.m., during the summer. One cautionary item is that the pandas get to make the decision about when they want to see you. All of the animals at the Zoo have spaces where they can go to get away from the crowds. In the summer, the giant pandas prefer the cool air conditioning indoors.

14. Where else are pandas represented at the Smithsonian?

There’s a large taxidermy specimen at the entrance to the mammal hall at the National Museum of Natural History on the National Mall. Near the Luce Foundation Center on the third floor of the Smithsonian American Art Museum at 7th and F Streets, muralist Kelsey Montague created a cheeky panda bearing posies and perfectly poised for Instagram poseurs. 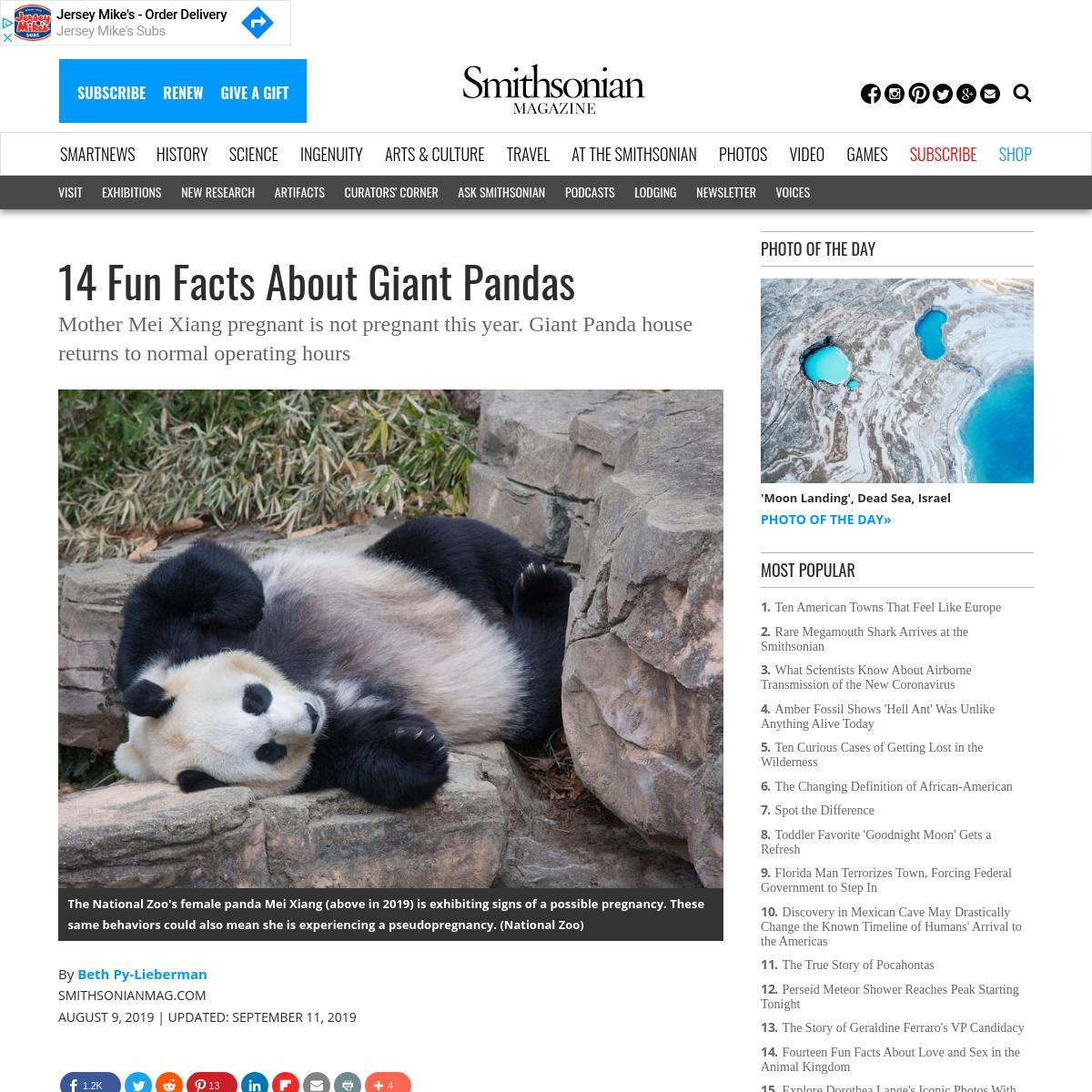