Women could choose from at least seven professions in ancient Egypt: priestess, musician, singer, dancer, mourner, weaver and midwife. But the full diversity of women’s occupations in ancient Egypt hasn’t been reflected in the artifacts and texts that have survived through the millennia, as a recently analyzed set of teeth suggests.

The find comes from Tell er-Rub’a, the site of Mendes, an ancient city, which was briefly the capital of Egypt. In the late 1970s, the New York University Institution of Fine Arts went on an expedition to Mendes and excavated 68 burials there. In the 1990s, Nancy Lovell of the University of Alberta and her team excavated the remains of an additional 66 adults there. That left Lovell and Kimberley Palichuk, her former student, a total of 1070 teeth. Among them, they noticed unusual wear patterns in the teeth belonging to the skeleton of one older woman, whose burial was also more elaborate than the rest of the dataset, populated with alabaster vessels, a bronze mirror and cosmetics.

Her 14 chompers showed flat abrasions while the incisors were worn into wedge shapes. Horizontal wear showed she was also a habitual tooth brusher, a rarity in the ancient world.

In some cultures, tooth modification is intentional, but that’s not the case in ancient Egypt. The wear patterns appear similar to those found in other parts of the world where craftspeople split vegetative material like reeds with their teeth. In Mendes, papyrus reeds would have been plentiful and the silica phytoliths found in them would have scoured her teeth and likely led her to brush her teeth regularly to clean off the plant material.

Based on that evidence, the researchers believe the woman presents the first solid evidence that Egyptian women were employed in craftwork.

“A strong case can be made that the plant was Cyperus papyrus, an aquatic sedge that grew abundantly in the delta,” the researchers write in a paper published in Bioarchaeology of Marginalized People. “Papyrus stalks were used for firewood, to make boxes and baskets for storage and transport of goods, and to make sandals, curtains, and floor mats.”

The finding is not particularly surprising, according to the researchers, since there’s available scholarship that shows ancient Egyptian women and men were equal under the law when it came to “owning, purchasing, inheriting or disposing of their property.” Women, they note, could also “enter into contracts, take oaths and witness statements.”

The distortion in what they could do professionally and what they were documented doing occurred because tomb paintings were made by men and commissioned by men. Thus, they write in their paper, they “represent an idealized and stereotyped world, conforming to the conventional view of daily life in which women do not work in anything other than domestic contexts.”

The women’s tooth wear contradicts this narrative, they write, making visible “the professionalization of women that is not registered in the documents and tomb scenes that are created by men and reflect male interests and biases.”

Egyptologist Joann Fletcher of the University of York, not involved in the study, tells Rosie McCall at IFLScience that the finding adds to our understanding of ancient Egyptian culture. “I think we can say it adds to a growing amount of evidence that the women of ancient Egypt played a far more active role in economic life than has traditionally been acknowledged, something which equates with their role within society as a whole,” Fletcher says.

Sonia Zakrzewski, a bioarchaeologist at the University of Southhampton, not involved in the study, echoes this sentiment. In an interview with Forbes’ Kristina Killgrove, she says, the finding helps place Egyptian women in the correct context. “We can now see her as being at the core of her community rather than as a marginalized person,” Zakrewski says, “albeit after having been marginalized by archaeologists in the past.” 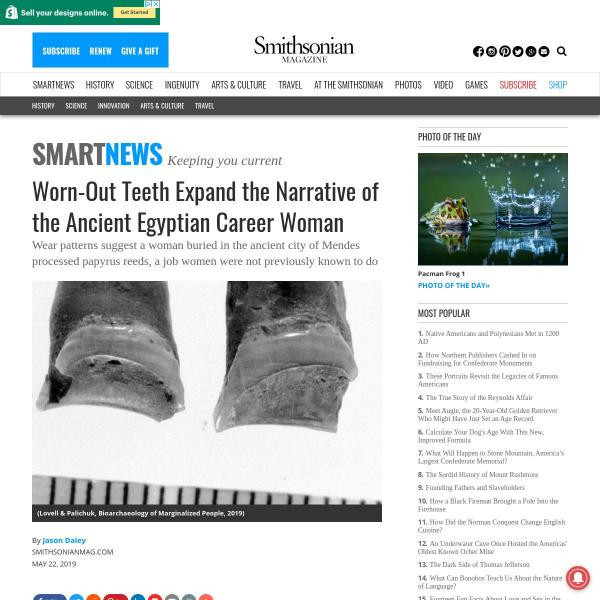