Change Author / Owner : These Photographers Venture Into Derelict Buildings in Texas So That We Don't Have To

Shane and Jessica Steeves see abandoned buildings as photo ops. For the past decade, the Plano-based couple has been traveling the highways and byways of Texas in an effort to capture as many of the state’s abandoned hospitals, hotels, schools, churches and factories before they disappear. Over the years they’ve photographed enough abandoned places to create a website and, now, even fill the pages of a book. Abandoned North Texas, set to release on April 29, features striking imagery of buildings in various states of decay, from metropolitan Dallas to the small town of Mineral Wells.

“It has always amazed us how these spectacular properties can just sit open in plain view while everyone else chooses to dismiss them,” the couple writes in the book’s introduction. “Most people just don’t see the beauty in them like we do. One of our favorite things to witness is for nature to reclaim a location.”

Smithsonian.com talked to the pair to find out more about the Depression-era hotel that originally stoked their interest, the sudden popularity of capturing abandoned places on social media and how they stay safe when setting foot into the unknown.

What made you interested in exploring abandoned places in North Texas?

Shane: We came across a picture that [professional photographer] Noel Kerns took of the Baker Hotel [in Mineral Wells] back in 2008. A few weeks after seeing the picture some of our friends were talking about going to the [long-shuttered] hotel and checking it out for themselves, so Jessica and I tagged along. We ended up getting inside the hotel, and we spent a good five or six hours exploring it. It really created an obsession for us.

What was it in particular about the Baker Hotel that captured your attention?

Shane: It was just the sheer size and aesthetic of it. It’s a very beautiful-looking building with old architecture [dating back to 1929]. It’s massive, and it has a spooky look to it.

Jessica: And it’s supposed to be one of the most haunted places in Texas as well.

Shane: This is where her experience is different than mine. She’s had some really weird experiences and is pretty positive that we’ve run into ghosts in a few spots, but I don’t believe in ghosts. I think they’re just weird sounds from the building.

Jessica: A lady’s voice is not a weird sound. I heard it clear as day in the lobby of the Baker Hotel. Shane was standing right next to me, and he says he didn’t hear anything.

What are some of the more surprising things you’ve happened upon inside these abandoned buildings?

Jessica: Also with schools too, when they close down sometimes every single thing is left behind. All of the books and desks, you would think that somebody somewhere could use them because they’re in great shape, but instead they just sit there and wither away.

In the time since you’ve explored these buildings, did any of them get renovated?

Shane: Unfortunately, most of them go the other way, and continue to deteriorate and get vandalized, burned down or scrapped.

Jessica: One place that was redone is Dallas High School, which was turned into lofts and apartments.

How do you decide which locations to explore?

Shane: Honestly, it’s kind of trial and error with us. We usually have a long list of locations we want to check out.

Jessica: That’s actually what we’re doing right now. We’re in Port Arthur and visited a closed-down waterpark called Paradise. We’re currently working on a book about abandoned places in South Texas. We visited it last night and the sheriff came up and asked us what we were doing. He told us to come back in the morning when it’s daytime so that it’s safer.

Shane: We were photographing the remains of it. It was destroyed by Hurricane Harvey, and there was still quite a bit of the park there, it’s just buried in sand. We understand that anytime there is police, we go out and greet them. We try to be cooperative and don’t make them come into the building to try to find us. We keep ourselves out of trouble, and a lot of times they realize we’re just there to take photos and nothing else.

What are some of the precautions you take to ensure your safety?

Shane: I usually walk through the building real quick before my wife comes in to make sure there are not squatters inside. And we’ll take respirator masks with us in case a place is moldy and has asbestos.

Jessica: A lot of the places we can’t actually get into. Yesterday we were in downtown Dallas, and we were trying to enter the Pilgrim’s Pride building, which was an old chicken processing plant, but there were a lot of [people] hanging out there, and we just didn’t feel safe.

Why do you think fascination with abandoned buildings has grown in recent years?

Shane: It’s ridiculous how much this has became a thing. When we first started doing this, everybody looked at us like we were idiots, and they didn’t understand. Now, two or three years later, those same people who questioned us are saying that what we’re doing is really cool and they ask if we can take them with us the next time we explore a place. Especially over the last five or six years, it’s really blossomed into a trendy thing. I’m seeing people all over Instagram and Facebook doing it. And we run into people constantly now, whereas before we would never run into anybody inside the buildings.

What do you hope people take away from reading your book and viewing your images?

Jessica: We see the inner beauty and historic value of these structures. Our photography gives us a chance to let people view abandoned buildings in a different light. Many people choose to ignore the majority of these dilapidated locations that they may pass on a daily basis.

Shane: We enjoy the challenge of taking something that may not necessarily be pretty and turn it into an interesting image. 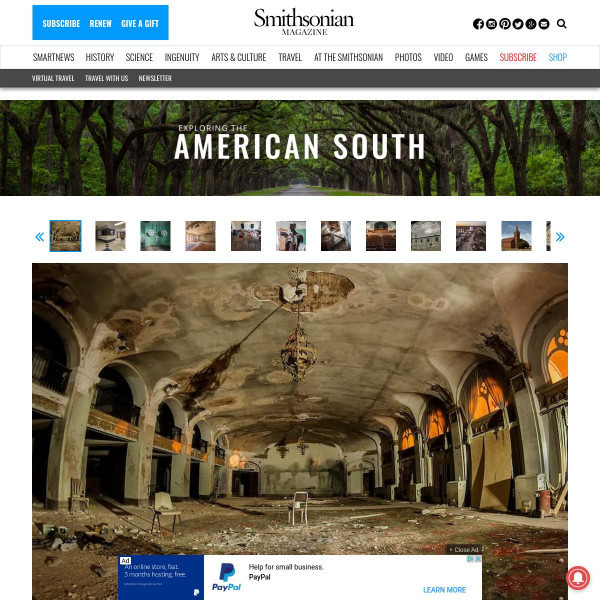