Change Author / Owner : Yet Another Study Finds No Link Between Measles Vaccine and Autism

A study of more than 600,000 children in Denmark has found that the vaccine for measles, mumps and rubella does not increase a child’s risk of developing autism, adding to a substantial body of evidence that refutes some parents’ fears about a possible connection.

The new study, published in the Annals of Internal Medicine, is one of the largest of its kind, according to NPR’s Rob Stein. Using data from population registries, researchers looked at 657,461 children born in Denmark between 1999 and 2010; the children were followed from the age of one until August 2013. Ninety-five percent of the young study subjects were vaccinated, reports Lisa Rapaport of Reuters. Of the children involved in the study, 6,517 were diagnosed with autism.

But the researchers did not find any increased risk of autism in children who received the MMR vaccine, compared to those who did not. Crucially, the study authors also looked at subgroups of children considered susceptible to the disorder due to several risk factors, like having siblings with autism and being born prematurely. “A concern about observational studies is that they do not often take into account the possibility of MMR vaccination triggering autism in susceptible subgroups of children,” the study authors acknowledge. But even among these subgroups, the researchers did not observe any connection between MMR vaccination and autism risk.

Fears about possible connections between vaccines and autism spectrum disorder can be traced back to a now-retracted 1998 Lancet study, involving only 12 children. The study was led by the British gastroenterologist Andrew Wakefield, who was later banned from practicing medicine after Britain’s General Medical Council concluded he had shown “callous disregard” for children in his work. After the paper’s publication, it was revealed that Wakefield had been paid by a law firm hoping to sue the manufacturers of the MMR vaccine, and that he had “altered or misrepresented” his results, according to CNN’s Edith Bracho-Sanchez.

Subsequent studies have repeatedly found no link between the MMR vaccine and increased autism risk. However, so many parents have nevertheless declined to vaccinate their children that the World Health Organization deemed “vaccine hesitancy” one of its top ten global health threats for 2019. Just last month, a measles outbreak sparked a state of emergency in Washington state, and experts are concerned about the possibility of other outbreaks in “hotspots” of vaccine opposition across the country. If a high percentage of a given population is immunized, the MMR vaccine can protect even those who are not immune. But as little as a five percent reduction in “vaccination coverage” could triple the number of measles cases in the United States, one study found.

Measles is a highly contagious viral illness that can have serious complications, such as pneumonia and encephalitis, or swelling of the brain. In some cases, these complications prove fatal. And as the new study and others like it indicate, there is no reason for parents to put their children at risk of contracting this illness due to autism fears.

“We believe that our results offer reassurance and provide reliable data on which clinicians and health authorities can base decisions and public health policies,” the researchers write.

Or as Anders Hviid, lead study author and epidemiologist at the Staten Serum Institute in Copenhagen, succinctly summarized in an email to NPR’s Stein: “MMR does not cause autism.” 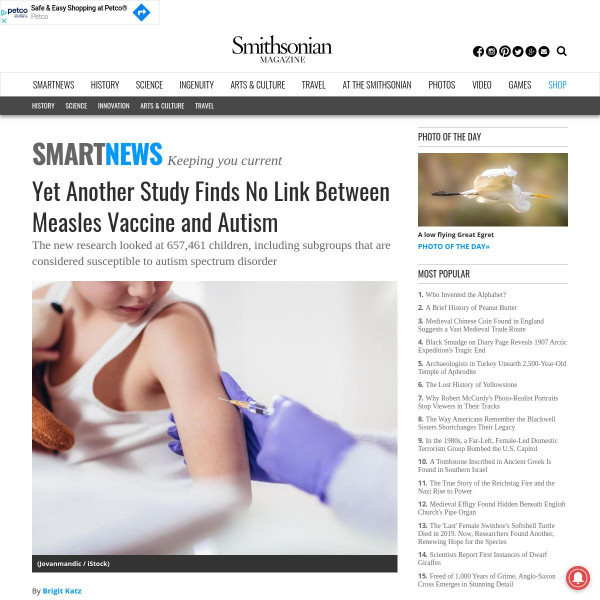