A 10th floor terrace at Tate Modern in London offers a spectacular view of the city; from this elevated vantage point, you can get a good look at St. Paul’s Cathedral, the Shard, Houses of Parliament and other landmarks that dot the streets of London. Some visitors, however, prefer to peer into the luxury apartments, equipped with floor-to-ceiling windows, that sit across from the art museum. Residents launched a legal battle in an effort to put a stop to the peeping, but as Alex Marshall reports for the New York Times, a judge has ruled in favor of Tate.

“These properties are impressive, and no doubt there are great advantages to be enjoyed in such extensive glassed views,” British High Court Justice Anthony Mann said of the apartments, according to Marshall. “But that in effect comes at a price in terms of privacy.”

The viewing platform at the heart of the legal tussle is part of the museum’s Blavatnik Building, an extension that opened to the public in 2016. Residents who occupy the multi-million dollar flats across the road were suddenly greeted by strangers waving at them, taking pictures of their apartments and even making obscene gestures at them.

In 2017, four owners in the building, which is part of a development known as Neo Bankside, sued Tate, citing a “relentless” invasion of privacy that in turn prevented the residence from being “a secure home for young children.” They wanted the gallery to either “restrict access to parts of the terrace adjacent to their homes or to erect a screen,” Marshall reported in November. For its part, Tate argued that its plans for the terrace were public knowledge when the apartments were being sold. The museum also suggested that residents install blinds.

The complaints of the apartment owners were, generally speaking, met with little sympathy from the public. In the midst of the legal battle, the artist Max Siedentopf installed binoculars around the observation platform so visitors could get an even better look into the residences. The installation was not authorized, and Tate took it down.

Justice Mann visited both the gallery and the apartments before reaching his decision, according to the Guardian’s Mark Brown. Mann acknowledged that “a significant number of people ... demonstrate a visual interest in the interior of the flats” (obscene gestures, he opined, are “probably very rare”). But the justice did not grant the residents’ request to close or block off part of the platform. He issued a similar recommendation to that of the museum: apartment owners concerned about their privacy can put up curtains, “lower their solar blinds,” or even place tall plants in front of their windows to obstruct the view into their homes.

Mann noted that his ruling is contingent on Tate Modern upholding two measures put in place to appease the institution’s neighbors. The museum had previously reduced the platform’s opening hours, and installed guards on the terrace to stop visitors from taking pictures of the residences.

“The level 10 viewing platform is an important part of Tate Modern’s public offer and we are pleased it will remain available to our visitors,” a Tate spokesperson said after the judgement was issued. “We continue to be mindful of the amenity of our neighbours and the role Tate Modern has to play in the local community.”

Natasha Rees, a lawyer representing the residents, was not quite as satisfied with the outcome of the lawsuit. “The limited steps taken by the Tate to prevent visitors viewing into my clients’ apartments are ineffective,” she said, according to Brown. “Both my clients and their families will have to continue to live with this daily intrusion into their privacy. We are considering an appeal.” 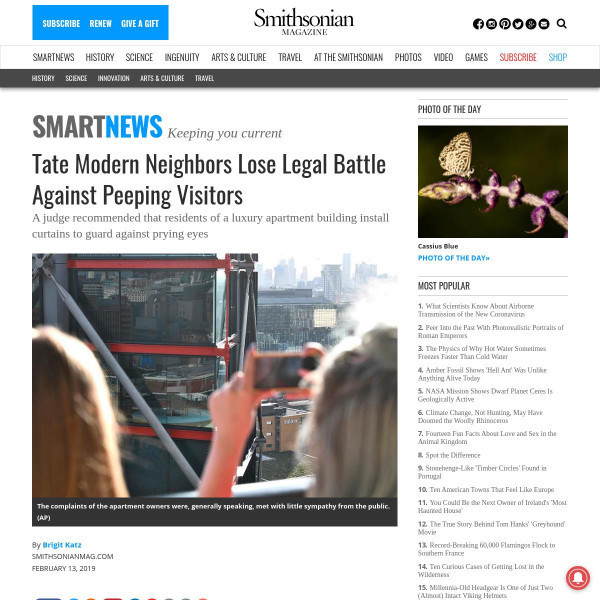