The dynamics associated with the carbon cycle and the linkage between the oceans, the atmosphere, and land plants provide an opportunity to correlate marine and terrestrial sedimentary sequences using stable isotopes of carbon ([delta]13C), but few studies have tested this approach. For instance, it has been proposed that changes in plant community (e.g., gymnosperm-dominated vs. angiosperm-dominated) could have significantly altered/amplified the carbon-isotope ratios of bulk sedimentary organic matter derived from land plants ([delta]13CTOM), compared to that of the marine carbonates ([delta]13Ccarbonate). Here, [delta]13CTOM values in a terrestrial sequence of the Colombian tropics are compared to the composite Paleocene-Eocene [delta]13Ccarbonate curve from Zachos et al. (2001) to evaluate the use of [delta]13CTOM values as a reliable chronostratigraphic tool. Sediments of the studied terrestrial sequences were deposited in a transitional setting dominated by mudstones, coals, and small lenses of sandstones (Late Cretaceous-Middle Paleocene sediments) and in a mixture of deltaic and fluvial conditions (Late Paleocene-Early Eocene sediments). The biostratigraphic control was based on palynological zones for the region. The [delta]13CTOM values for the studied terrestrial sequence show three carbon-isotope excursions, which correlate closely with those present in the marine record. The [delta]13CTOM values decreased from - 24.2[per mille sign] to - 26.5[per mille sign] in sediments accumulated during Early to Middle Paleocene, increased from - 26.5[per mille sign] to - 23.8[per mille sign] during the Late Paleocene, and decreased from - 23.8[per mille sign] to - 26.5[per mille sign] near the Paleocene-Eocene boundary (52-50 Ma). Selected biomarkers indicate that most of the organic matter derived from both gymnosperms and angiosperms. Moreover, the analyses of selected biomarker ratios (CPI, Pr/Ph, Paq, and [beta][beta]/[beta][beta] + [alpha][beta] hopanes) show some diagenetic transformation in the preserved organic matter. However, no correlation between diagenesis and [delta]13CTOM values was detected, thus suggesting that [delta]13CTOM could be correlated with [delta]13Ccarbonate values. The close correspondence that was found between [delta]13CTOM and [delta]13Ccarbonate values ([Delta]13CTOM-carbonate ~ - 27[per mille sign]) provides support to the hypothesis that a tight land-plant-oceans linkage exists through geologic timescales via atmospheric carbon dioxide. 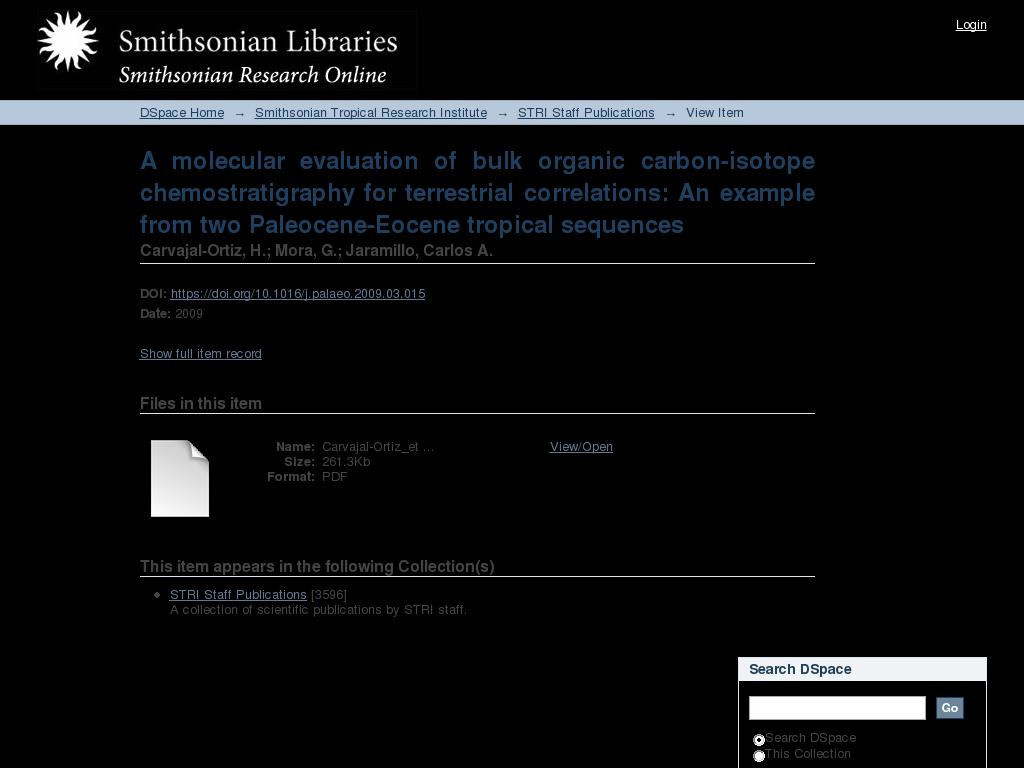