For almost 400 years, the Taj Mahal, just south of the Indian city of Agra, has stood as a gleaming white monument to love; the iconic mausoleum was built at the command of Mughal emperor Shah Jahan to commemorate his favorite wife, Mumtaz Mahal who died during childbirth. But lately the tomb has lost some of its shine—bug poop and industrial pollution have begun to turn its white marble green, black, brown and yellow, and state caretakers have struggled to keep the building clean. Now, reports Gareth Harris at The Art Newspaper, the Supreme Court of India has handed down an ultimatum—“Either you demolish [the Taj Mahal] or you restore it.”

The BBC reports this is not the first time the court has weighed in on the state of the Taj. In May, the court instructed the state of Uttar Pradesh, where the Unesco World Heritage Site is located, to seek out foreign experts to help stop the “worrying change in color” of the monument since it appeared state experts were unable or unwilling to save the monument. Since that order, however, the federal and state governments had not filed any sort of action plan or follow-up, prompting the court to accuse them of “lethargy” and to issue the hyperbolic mandate that they might as well demolish the site if they weren’t going to take care of it.

The once-gleaming Taj Mahal faces several threats, most of them manmade. In another article, the BBC reports that an insect called Chironomus calligraphus has invaded the monument, leaving patches of green-black frass in many parts of the structure. While the bug is native to the Yamuna River, which flows past the Taj, its population has exploded in recent years due to pollution of the waterway. “Fifty-two drains are pouring waste directly into the river and just behind the monument, Yamuna has become so stagnant that fish that earlier kept insect populations in check are dying. This allows pests to proliferate in the river,” environmental activist DK Joshi tells the BBC.

The bug poo can be scrubbed away, but frequent scrubbing of the marble is labor intensive and dulls its shine.

Industrial pollution is also taking its toll. Nearby oil refineries, a 200-year-old wood-burning crematorium, and other factories have caused the marble to start turning yellow. Though the government has closed dozens of nearby factories, it has not stopped the yellowing of the Taj. While conservators use a special type of mud plastered to the walls to pull out the pollutants every few years, the pollution stains keep returning.

The threat to demolish the iconic landmark is certainly a bluff, but one the federal government is not planning to call. Today, Dipak K. Dasha and Vishwa Mohan of The Times of India report that the government is preparing to file an affidavit with the court including a 100-year plan for the Taj in response to the Supreme Court’s admonishment. The plan includes closing down more industries near the Taj, cleaning up and preventing pollution discharge into the Yamuna, establishing a green mass transit system in Agra, improving the area’s sewage treatment plants and establishing a rubber dam to maintain the flow of water in the river, which can help in conservation efforts.

“We’ll take all possible measures on a war footing in a time bound manner to conserve the Taj Mahal and protect it from all kinds of pollution, be it air or water,” water resources minister Nitin Gadkari tells The Times. “We are sad over the Supreme Court’s observations. We, perhaps, couldn’t tell the court as to what all we have already done and what all we have been doing. We’ll inform the court all this in our affidavit.”

Any investment to preserve the Taj Mahal is probably worth it. The nation’s top tourist attraction draws up to 70,000 visitors per day, and all the dollars that go along with that. Of course, tourism is a double-edged sword, too: All that foot traffic is impacting the foundations of the aging structure and the touch of oily human hands and moist breath is discoloring the interior. That’s why earlier this year the Archaeological Survey of India proposed capping the number of Indian visitors to the site at 40,000 per day. And in March the Survey implemented a 3-hour limit to visits, also an attempt to keep crowd sizes down. 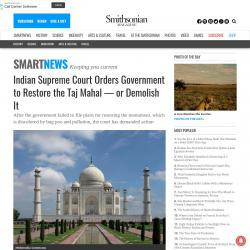