The trauma of losing its first leader, George Washington, was greatly felt by a new nation. Ezra Stiles, a pastor of the Second Congregational Church in Newport, Rhode Island, and later president of Yale, implied in one of his wartime sermons that the nation perceived Washington as an instrument of God. This view was shared by many artists and poets of the revolutionary era.

After George Washington died on December 14, 1799, Samuel Folwell, an artist from Philadelphia, created a series of designs for memorial embroidered pictures to honor his death. Other artists followed his example, and these embroidered pictures became known as mourning pictures. They included an assortment of plinth and urn forms, mourners, angels, and trees in a garden setting. These symbols had classical roots and were brought to the American colonies in the 1600s. Folwell’s wife, Elizabeth, had a school in Philadelphia where many of these embroideries were probably executed.

The oval embroidered memorial above is dedicated to George Washington. It features an urn-topped plinth. The urn is inscribed “GW” and the inscription on the plinth is “SACRED TO THE MEMORY OF THE ILLUSTRIOUS WASHINGTON.” To the left of this group are two weeping willow trees with crossed trunks. Overhead is an angel with a trumpet and a laurel wreath. Many people see the willow tree as a symbol of mourning and sorrow. The angel, trumpet, and laurel wreath could signify the deceased being summoned by the trumpet of the archangel.

Not only were pictures embroidered in memory of George Washington, but young ladies, often in academies for women, also worked embroideries in memory of deceased relatives. According to an object record from the Moravian Museum of Bethlehem displayed on the website of the Bethlehem Digital History Project, “the mourning piece later transcended its original purpose and became a fashionable needlework motif exemplifying refinement and culture.”

Because the embroideries created by the young women used advanced techniques, the students often had help with stitching as well as with painting the background, the faces, and hands. I’ll share with you a few of the interesting mourning pictures in our collection and what we’ve been able to learn of their makers: Susan Winn, Hannah Walbridge Converse, Olive Brown, and Hester Ann Posey. Because the lives of women in this era are often poorly documented, these objects are particularly important in increasing our understanding of their lives and their roles in their families, communities, and their nation.

The example above was embroidered by Susan Winn, around 1816, in Lititz, Pennsylvania, and dedicated to her sister Caroline, who died in infancy in 1806. It is 25 ¼ x 25 ¼ inches. A cloth-draped urn on which is printed “rests in Peace” appears at the top of the plinth. The woman and girls depicted wear necklaces with pendants or plaques; the one worn by the girl on the right is lettered “SW.” The boy holds a book on which is printed “Ble—ed are the Dead that die in the L—-.” Printed in blue ink on the front of the plinth is “Sacred to the Memory of / my dear Sister / CAROLINE WINN. / Sweet be Thy sepulchral rest / Sister dear! supremely blest! / May the ties which us unite / Be renew’d in realms of light! / Erected by / Susan Winn.”

Susan Winn was born October 18, 1801, in Baltimore, Maryland. Her father was a flour merchant and entered Susan and her sister Elizabeth, who was two years younger, in Linden Hall Seminary in 1815. Located in Lititz, it was a Moravian boarding school. This is where she embroidered this picture.

Another mourning picture in the museum’s Textile Collection was made by Hannah Walbridge Converse. A memorial to several members of the William Poole family of Williamston, Vermont, the mourning picture led us on a genealogical journey. Hannah Walbridge Converse lived with the Poole family while teaching school in Williamston. She painted it on cotton velvet in 1828 and it is 20 x 27 inches.

On the back of this picture dedicated to members of the Poole family—many of them quite young—was attached a slip of paper that made it known that the picture was made by Mark Hanna’s grandmother. Well who was Mark Hanna, and why was he so notable? If you are from Ohio, you may know who he is. For the rest of us, it took another clue to solve that puzzle. A flyer about President William McKinley was in the museum’s accession folder that mentioned Hanna. Hanna was McKinley’s campaign manager and was also a senator from Ohio. With that connection made, Google and Ancestry.com led me to Hannah Walbridge Converse, the maker of this mourning picture.

Hannah Walbridge was born in Stafford, Connecticut, on October 11, 1751. She married Israel Converse on June 27, 1771. Israel served in the Revolutionary War at the Lexington alarm in 1775 and then again later in 1775 and 1776. In 1780 they moved to Randolph, Vermont, where they were among the first settlers. Hannah and Israel had a son named Porter. Israel died in 1806. Hannah probably found employment as a teacher to support herself. She died in Ohio, two years after making this picture, on October 17, 1830. Porter went on to marry and have a daughter who married Leonard Hanna—Leonard Hanna’s son was Mark Hanna.

In addition to these pictorial mourning works, girls sometimes also crafted samplers with mourning or “in memoriam” aspects.

Olive Brown was born November 7, 1782, in Winchendon, Massachusetts. On November 30, 1809, she married Dr. Nathaniel Howard from Temple, New Hampshire. They had four children. She died March 13, 1820.

In 1837, 14-year-old Hester Ann Posey combined a family record with a memorial to her sister Margaret. It is 27 x 25 1/4 inches. On a pyramidal monument flanked by rosebushes and butterflies, under a weeping willow tree, she stitched, “sacred to The Memory of Margaret Posey Who died Feb 2 A.D. 1824 aged 8 YS 1 Month and 14 days.”

In a box on the left she included this poem, "Weep not my friends as you Pass by, as you are now so once Was I, as I am now So you must be, prepare to meet me in Eternity.”

Hester Ann Posey was a teacher. She did not marry. Toward the end of July 2016, a descendant of Posey’s came to the museum to see her sampler. She informed us that Posey’s death date was November 7, 1916, and that she was buried in Frederick, Maryland, at the Mount Olivet Cemetery. It is always wonderful when a descendant or others can help us correct or complete our genealogical information about the maker or user of an object in the Textile Collection.

Sheryl De Jong is a volunteer in the Textile Collection, Division of Home and Community Life. 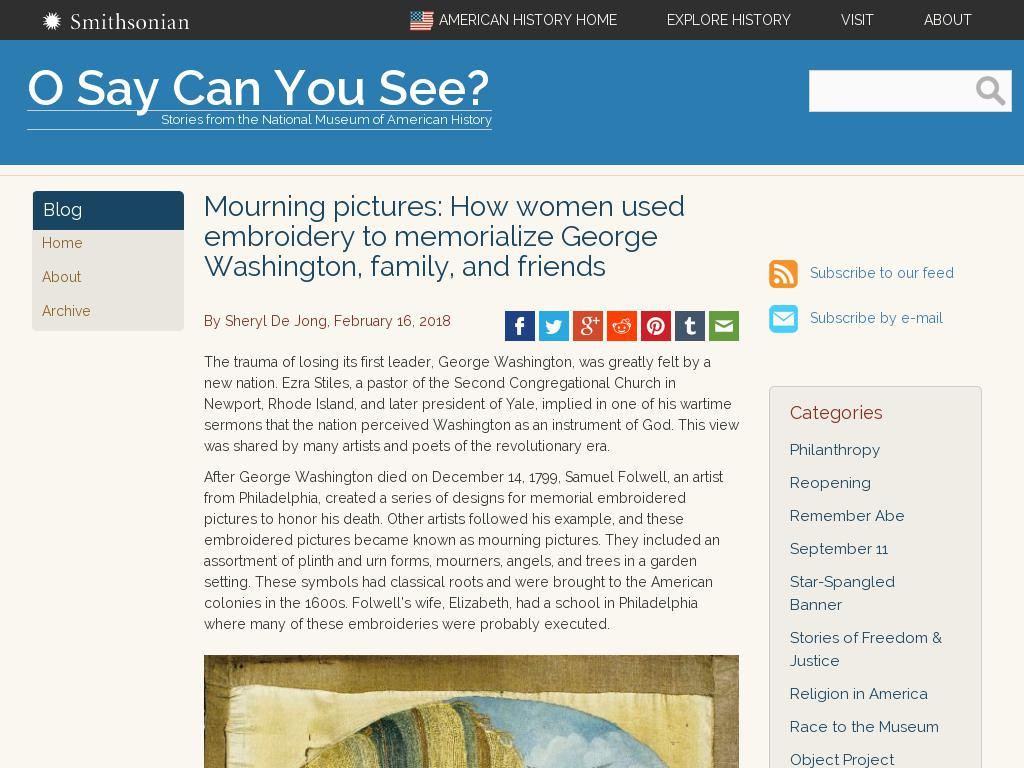