Change Author / Owner : The dueling designs for the modern x-ray tube in World War I

Twenty years before the start of World War I, a new "light" that could pass through a human body revealing its underlying structures caused a public sensation. Within a few years, the x-ray had become a standard worldwide diagnostic tool in medicine. The early equipment used to produce the x-rays was unstable and difficult to use, but scientists Julius Lilienfeld of Germany and William Coolidge of America found solutions independent of each other at essentially the same time. Their similar, sometimes competing, work during World War I resulted in the x-ray technology we use today. 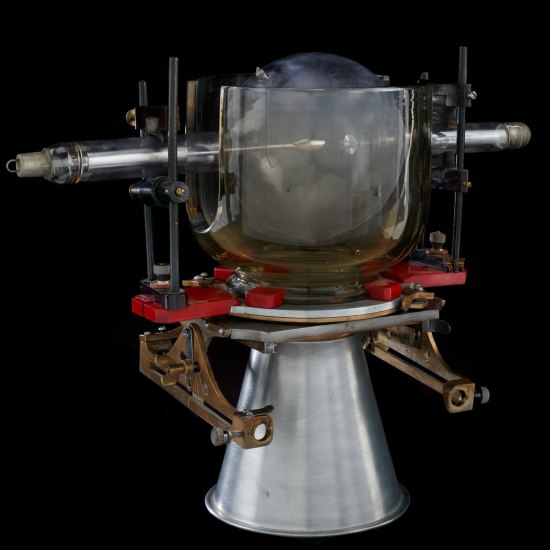 X-ray setup, around 1918, currently on display in “Modern Medicine and the Great War.” In 1913 Coolidge introduced a more reliable and rugged x-ray tube that was adopted by the military for the war. The thick glass shield helped protect staff from x-ray exposure.
X-rays result from the energy released from fast moving electrons striking a hard target. In the earliest equipment, these electrons came from a small amount of gas, held at very low pressure, inside a glass tube. The technical problem: as the gas slowly depleted in the tube, the gas pressure dropped, along with the x-ray output. Operators would often compensate for this by increasing the electrical power to the tube, but this degraded the imaging quality of the x-rays and increased the rate at which the gas depleted.
Years before, Thomas Edison—among others—had shown that when a wire is heated to incandescence, it spontaneously emits electrons. Lilienfeld was the first to use this idea to solve the x-ray tube problem. He placed a wire that could be heated by an electric current inside an older style x-ray tube. When heated, the wire gave off electrons that would supplement the electrons produced in the gas. Lilienfeld claimed that the tubes could operate even when the gas was completely depleted. He made several refinements and filed a series of patents in Germany and the U.S. between 1911 and 1914.
William Coolidge, while working at the General Electric laboratory in Schenectady, New York, had essentially the same idea, and filed his first patent application in May 1913. His design required a tube with a very high vacuum; this ensured that all of the electrons came from the hot wire rather than from any residual gas in the tube. In a scientific paper describing his work, Coolidge credited Lilienfeld for being the first to introduce a heated wire inside an x-ray tube, but criticized him for not having achieved a sufficiently good vacuum. Lilienfeld soon responded with a somewhat indignant reply in the same journal.

The Coolidge Tube. This drawing is from the 1918 United States Army X-Ray Manual published by the United States Surgeon General's Office (page 32, figure 6). 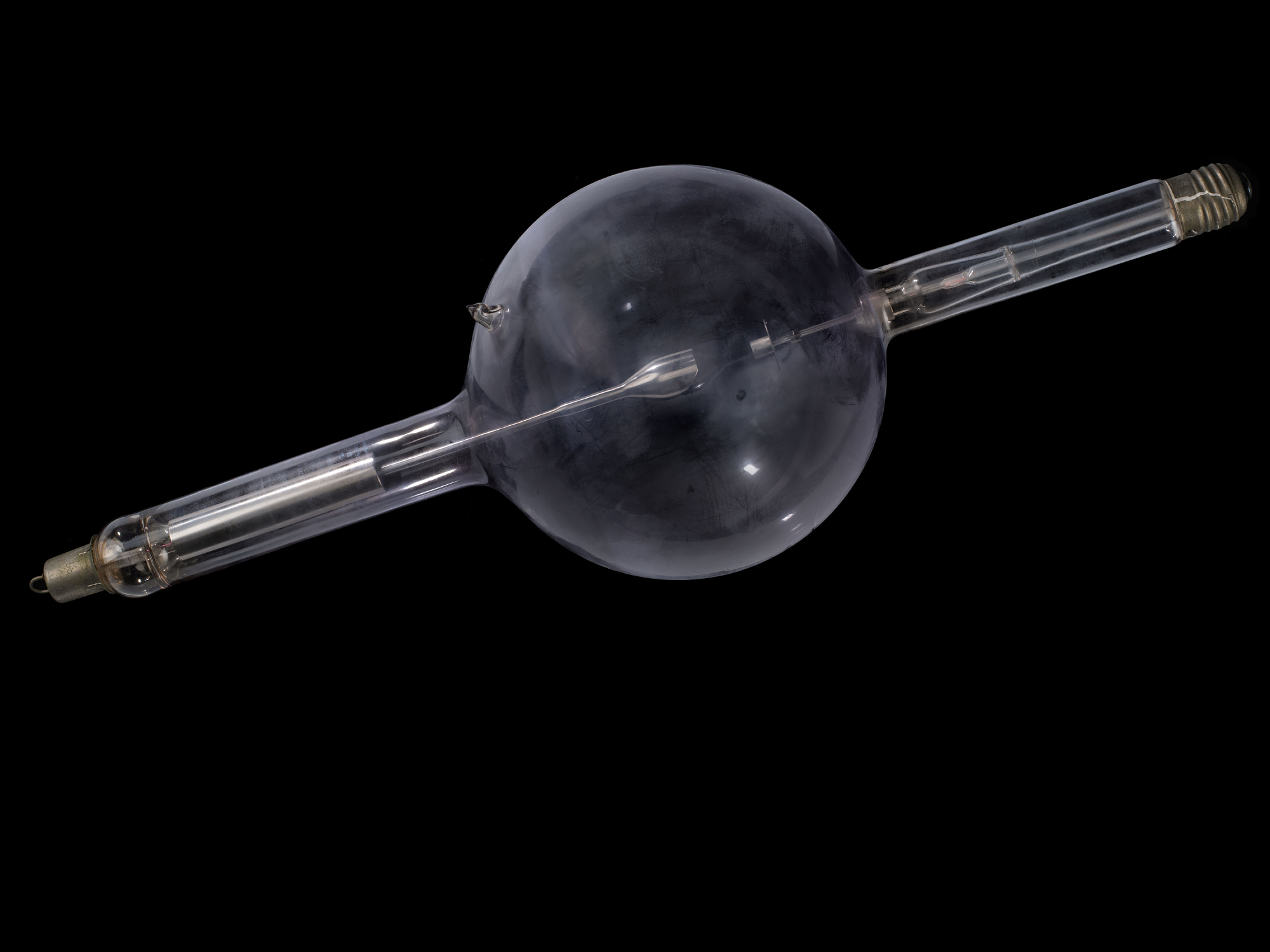 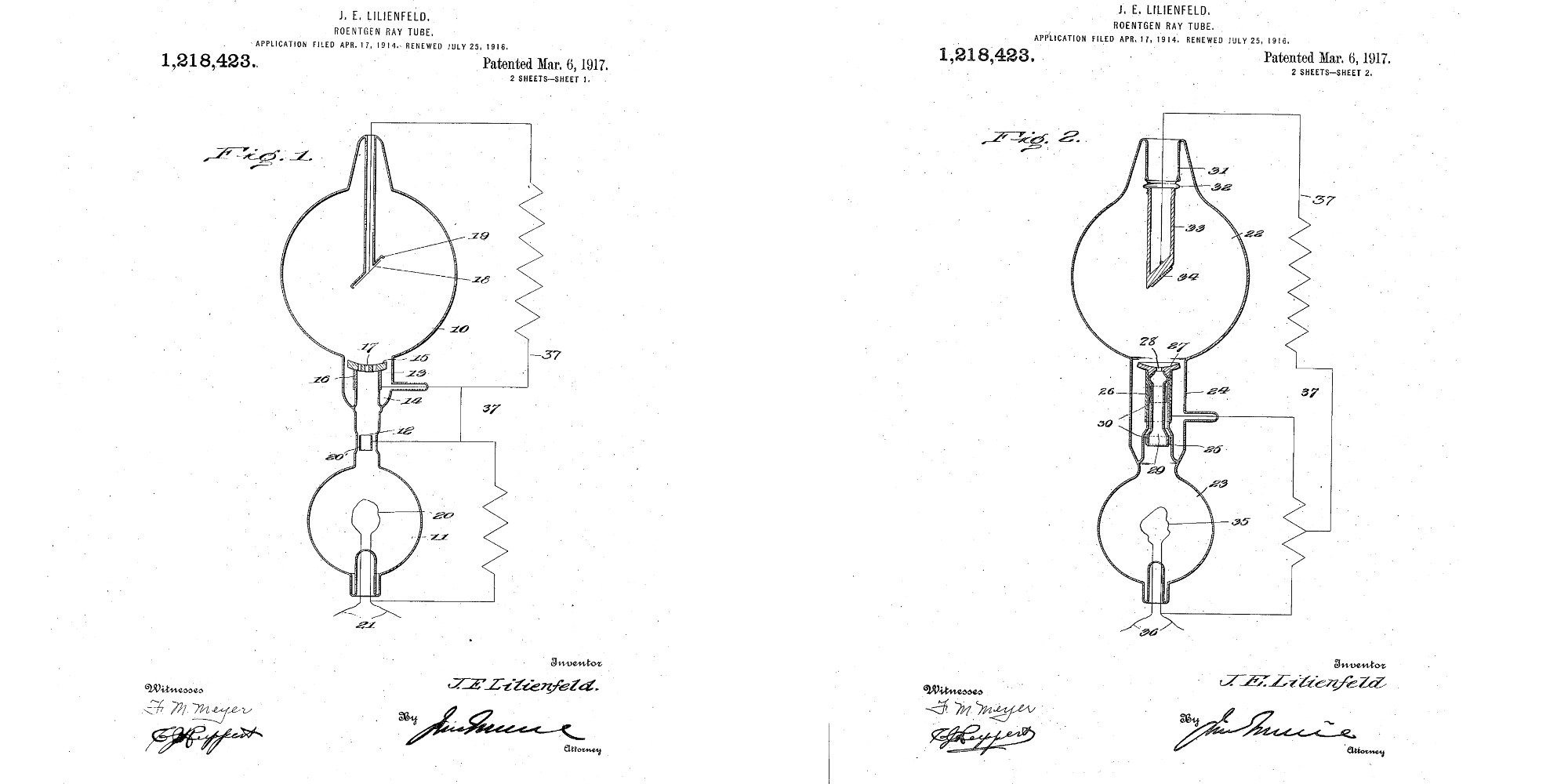 Lilienfeld Tube. Drawing of U.S. Patent 1,218,423.
No matter the critical exchange between the two men, the U.S. Army embraced the Coolidge tube for use in x-rays and trained hundreds of physicians and technicians at the Camp Greenleaf School of Roentgenology in Georgia. By the end of the war, nearly 4,000 Coolidge tubes had been shipped to the war front for use by the U.S., British, and French military physicians.
Lilienfeld's patent rights were seized under the authority of the Trading with the Enemy Act of 1917 and sold to a private entity, The Chemical Foundation, which in turn sued General Electric for patent infringement. Lilienfeld came to the U.S. in the early 1920s to defend his patent rights but General Electric ultimately prevailed. The basic Coolidge high vacuum tube remains the standard design in all modern medical and dental x-ray equipment.
Lilienfeld went on to receive a number of patents in electronics and achieve international recognition. Despite their knowledge of one another's inventions, which both modernized the use of x-ray technology, it is not clear if the two scientists ever met.
Eric Kearsley is a volunteer working in the Division of Medicine and Science at the National Museum of American History. He has also blogged about an abstract artist and his World War I X-Ray Car.
Author(s):
museum volunteer Eric Kearsley
Posted Date:
Monday, January 29, 2018 - 17:15
Categories: 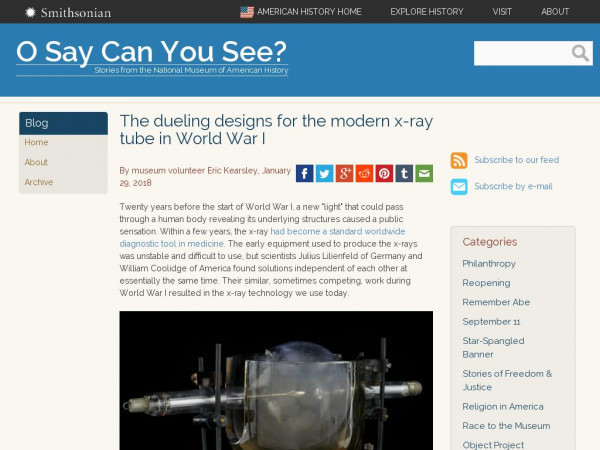